I have recently been made aware of another Zaccagnini figure, the Queen of Hearts. I have not seen one in person, but a reader forwarded this black and white photo of the Queen. Given the size of the King, she must be HUGE! 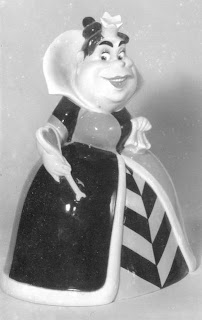 I just returned from a whirlwind trip to Disneyland.  Although the weather was overcast, it was quite a pleasant day at Disneyland.  Until I got to the Alice attraction. 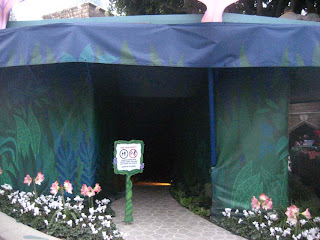 Words cannot describe the horror of seeing this abomination in person.  It is quite possibly the tackiest thing I've ever seen at the park. 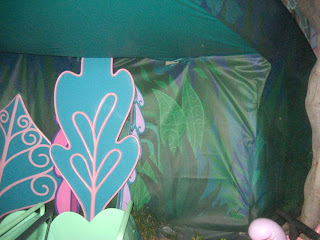 The railings are clunky, the pasted on leaves look just that - pasted on.  And the tarp, while it has a screen printed leaf motif, is still a tarp, in some places attached with visible zip ties. 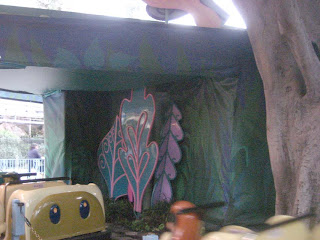 I spoke with a well placed individual who described what the deal is.  The deal is that an off duty OSHA guy made a comment that the ride should have railings for maintenance workers.  Disneyland knee-jerked and put up these railings and platforms. 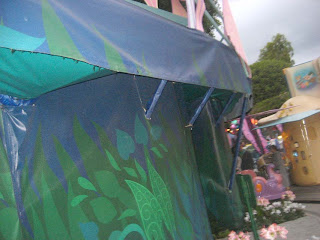 The railings and platforms were so heavy that they needed supporting structures.  All of this was heinously ugly so they put up these tarps. 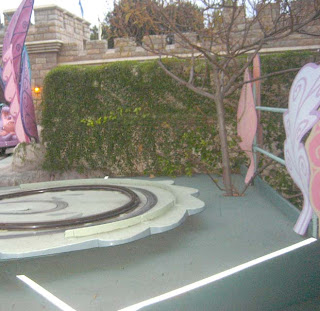 It gets worse.  I fear this atrocity is permanent.  The story is that Disneyland is not prepared to spend any money to make this look better, or rework the attraction in general to make it attractive and meet some sort of unofficial OSHA requirement that was not needed for the past 52 years.  So for the foreseeable future, and possibly forever, Alice is going to look like this.

I have only two words for Disneyland:  BAD SHOW. 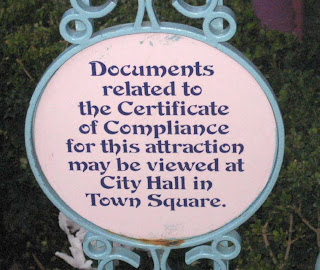 Email ThisBlogThis!Share to TwitterShare to FacebookShare to Pinterest
Labels: Disneyland

Although the past two years have been banner ones for me in the Zaccagnini acquisition domain, lately I just can't seem to win.  Hence, a new Zaccagnini figure from Alice in Wonderland has been spotted, but not acquired by me, 'natch.  Yet another Cheshire Cat.  This figure is quite different from the other two previously posted, it lends credence to a suspicion that I have regarding Zaccagnini figures. 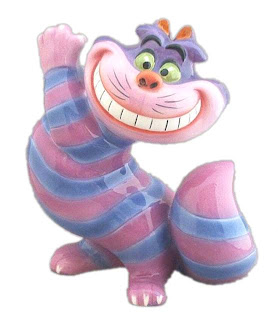 I begin to think there were two different Zaccagnini series, done at different times.  Over the years I've been collecting images of any Zaccagnini figures that I could find, and there definitely seem to be variations in style.  It is especially noticeable in some of the Mickey, Donald, and Pluto figures.

The first two Plutos have all the characteristics of 'first series' figures, while the third Pluto falls into the 'second series' category.  All three are Zaccagnini.  Notice also that there are at least 3 Plutos (there may be more), so it is not odd that there would be multiple different figures of the same character.  Just look at Goebel for examples of that gone to the extreme.

So perhaps this clapping Cheshire Cat figure, which has 'first series' characteristics, is from an earlier series, and the other Cats, which seem to fit the 'second series' characteristics, are from a later period.  Either that, or there were multiple sculptors at work?  Since next to nothing is known about Zaccagnini anyway (at least by me), all of this is pure conjecture on my part.  Perhaps one day someone in Italy will be able to write the definitive text on the subject.
I am convinced that all are indeed Zaccagnini, as all have the distinctive mark on the base and have a similar weight, size and feel.  Also, even though the 'second series' figures are different, they are still extremely well modeled and appear to be very much production quality, so not handmade knockoffs.

UPDATE:  Brian pointed out that our friend is not really clapping, merely preparing to dive off his branch into invisibility upon his first encounter with Alice.  Alice has just asked him where she should go, and that it doesn't matter where, and his reply is "then it doesn't really matter which way you go!" 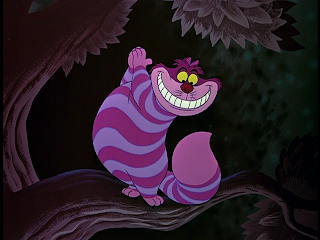 This concludes the set of string holders.  While I do not know who the maker was, I do have a copy of the original advertisement for this set.

Based on the ad, it looks as though they may have been sold as whiteware, to be painted at home.  The paint job on these is quite good (for the most part) and I have seen a second Mad Hatter that is virtually identical, so perhaps you could get them either way. 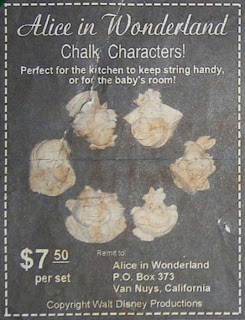 Here is a picture of the full set complete with string hanging from their mouths.  This one's for your Major ;-) 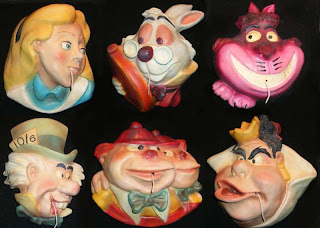 As with the Goebel figure here we have a bit of a cheat.  String holder #405 is both Tweedledee and Tweedledum.  It make sense, no one really want two heads on their wall this scary. 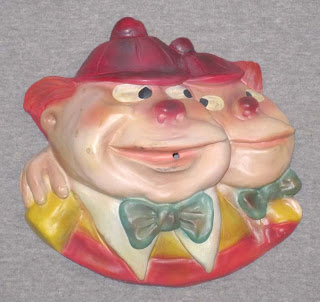 Actually, this is one of the better modeled of the set, but still...

Perhaps the scariest of the bunch is #404, the Queen of Hearts. 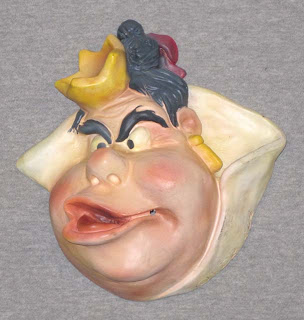 Only a strong stomach and an innate desire for complete sets made this desirable for me.  I love a complete set.

Third in the series is the White Rabbit, #403.  I must say that this is the best rendered of the set, most on model, least scary, however you want to put it. As with all the others, it bears the © WDP copyright along with its stock number incised into the body of the string holder itself.  Unusual, I would have thought it would have been on the back side rather than visible while hung up.

Next in the string holder set is #402, the Mad Hatter.  I can't say that these are attractive, but very cool in a kind of grotesque way. 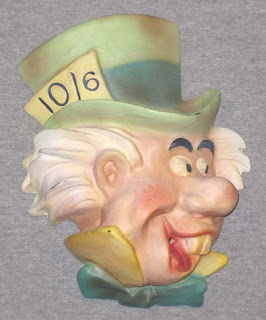 I believe that these are licensed, as they all bear a © WDP, but I don't have a date on them.  I can only assume 1950s, mostly because they made a full set, and that usually only happened during or around the original release, and string holders slowly faded away after the 1950s.

Taking a break from the live action reference photos, we now begin a series on something I never knew existed until 2 weeks ago.  A series of string holders, apparently from the 1950s, made of what is typically called chalkware, but in reality is more of a bisque fired pottery or whiteware. 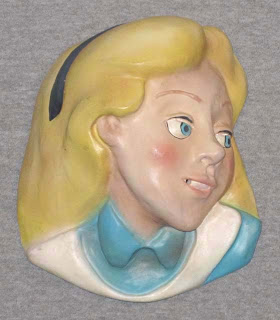 Alice here is first in the series, with her WDP copyright and item number 401.  I do not have a maker on these yet, I have not been able to find an appropriate maker in the TOMART index and these do not appear in either the campaign book or the CMD catalog.

We are at the fall meeting of the Lewis Carroll Society of North America today, a day will with all sorts of Carrollian goodness.  If you are in the NYC area, come on down!  This meeting, as will all LCSNA meetings,  is free and open to the public.  This year it is being held at NYIT.  Hope you can come!
Posted by Matt at 12:01 AM 2 comments 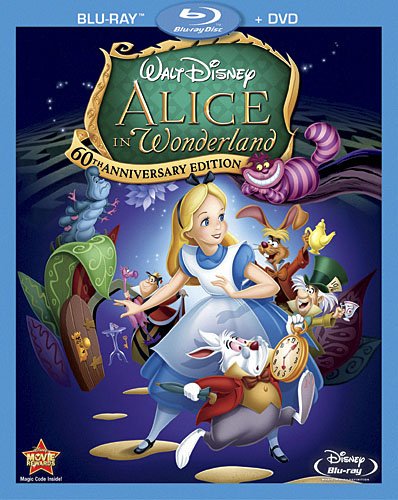 Thanks to reader the-mad-kiwi for the heads up on this.  The Blu-Ray release of Alice in Wonderland was announced this week, scheduled for February 1st, 2011.  There are a couple of new supplemental features on this release, and my appearance in Reflections on Alice is also included, so go me!  Let's hope they announce more new features.
Posted by Matt at 11:02 PM 2 comments

I don't have a corresponding screen grab for this one, because it looks like this is for a sequence that was cut.  There is no scene at the tea party where Alice looks into the lid of a teapot.  The Mad Hatter does at one point, but not Alice.  I wonder how many of these reference photos for cut scenes exist? 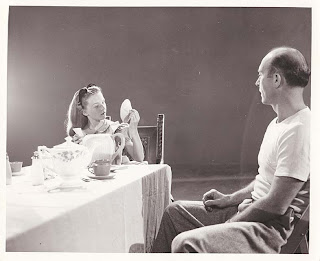 This one is a shot in the dark, it is such a generic standing pose that it is hard to pin it down exactly, but this screen grab looks pretty close. 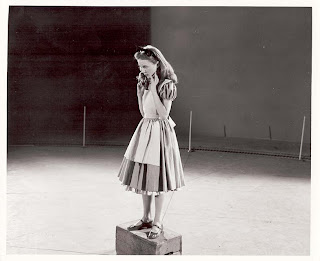 Other possibilities could be in the Tulgey Wood, or in the courtroom. 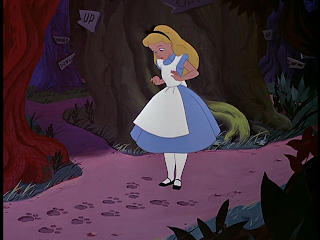 This is a great scene in the film, Alice fleeing the courtroom as the cards fly through the air after her. 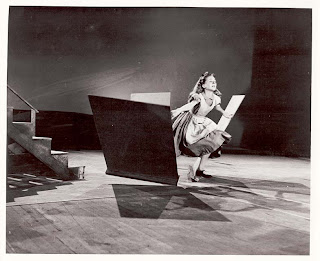 I imagine it would have been difficult to get things actually flying around - not to mention dangerous - but at least they mocked up a wall of cards for Kathy to break through. 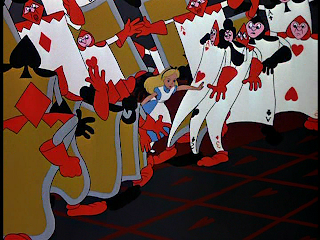 This is pretty obscure, and who knew the lengths they went to to stage these live action reference shots. 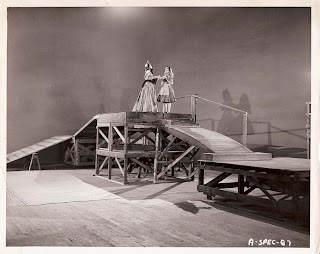 Can't believe they actually built a bridge for them to walk across.

I've added a detailed close up of Kathy and the actor portraying the sister.  Unfortunately you cannot see the actor's face, so you can't tell if it is Heather Angel or not.  According to IMDb she would have been 41 at the time of this shot.  I can only find photos of her from the 1930s to compare, so it is very hard to say. 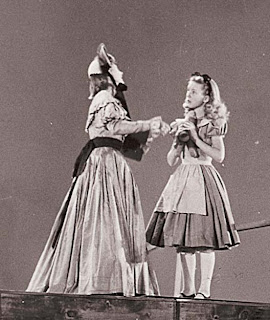 Another bottle picture today, this time featuring yet another crazy contraption meant to make Kathy sick. 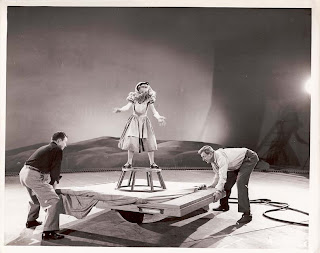 Check out the rocker mechanisms on the underside of the platform, nothing like the modern day gimbals they use to move entire sound stages around.  Rube Goldberg eat your heart out. 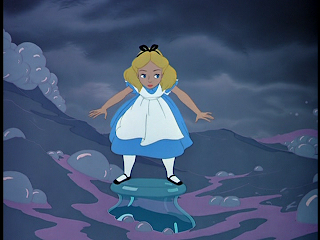