I'd never heard of this before, apparently in 1969 Disney contributed a great deal of entertainment and floats for the 34th Annual Sun Carnival, the entertainment events leading up to the Sun Bowl college football game in El Paso, Texas. 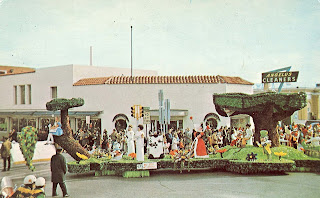 This postcard shows nearly the full Alice float from the parade. 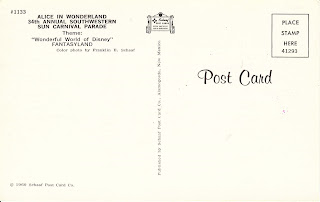 Amazingly enough, I located a clip of the parade, and of this exact float, at the Texas Archive of the Moving Image.  The video quality is a little dark, and it suffers from period editing styles (lots of crossfades and superimposed imagery, stupid 1960s) but you can definitely tell it is the same float.  Click the image below for the 9 seconds that the float is onscreen.  For those viewing on iOS devices, the segment begins at the 7:42 mark. 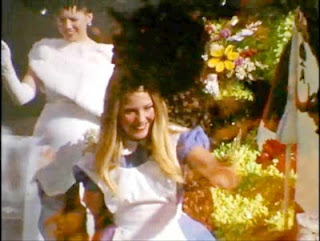 I tried to embed the video directly, but I couldn't figure out how to turn autoplay off on their flash player.  You can view the entire 13 minute video here.

The video is a nice snapshot of late 1960s culture.  What's cool is that there is other Disney stuff in the video, including a brief clip of Wally Boag performing his famous Golden Horseshoe routine with the spitting teeth, and of course Can-Can girls!  And lots of rubber head Disneyland walkaround characters.
Posted by Matt at 12:00 AM