Eastern Jewelry Mfg. Co. (aka Coro) - A Page from the Character Merchandise Catalog

The Eastern Jewelry Manufacturing Company - also known as Coro - produced a wide range of costume jewelry for the original release of Alice in Wonderland. Pictured below is the page from the Character Merchandise Catalog for that line. 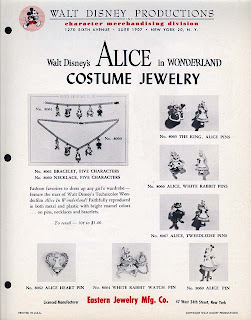 It pictures a total of 9 different items, some of which appear to have been sold in pairs as the pins pictured along the right side of the page share inventory numbers - all pairs included an Alice and another character.

There are some holes in the numbering, one can speculate about the missing items - and for certain I have an item not listed on this page that could very well fill one of those holes. Stay tuned over the next few days for more details on this line of jewelry.
Posted by Matt at 12:03 AM 0 comments

So, let me start this post off by saying that I love the Disney Cruise. I think they are the best cruise line out there, and I have always always had a great time - so much so that I've been on 6 of them with my family and various friends, and plan to go on more. Probably after Computer Girl finishes college however ;)

A couple of weeks ago, coinciding with the D23 expo - which I did not go to :( - there was a special Disney Cruise - which I also did not go to :( - that had a presentation on Disney character voices featuring two Disney Legends - Kathryn Beaumont (Alice, Wendy) and Bill Farmer (Goofy). A friend of mine did go, and sent me the following photos he took at that presentation. 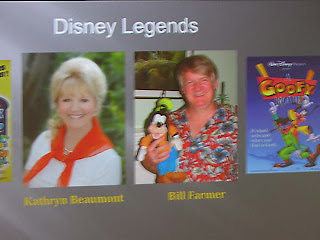 During this presentation they would project various fun images related to the two guest speakers. This one shows part of a promotional photo of Kathy dressed as Alice in front of lots of Mary Blair art. 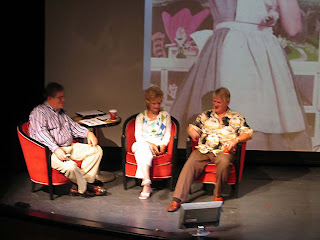 This photo shows some stills of Kathy and Walt at the time she signed her contract. Hmmm.... something familiar about these.... 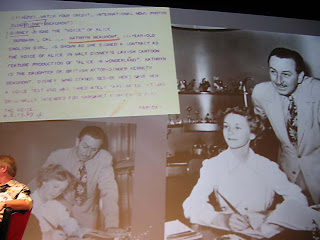 Oh yeah, I had a post about the photo on the right about a year ago. Funny that they should choose that image... and look they even included the snipe on the back... funny that they had the same snipe... pretty amazing coincidence... 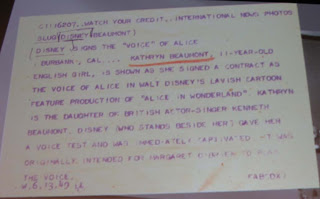 Or maybe not such a coincidence. Look at this. It isn't just another copy of the photo and snipe, it is the exact copy that resides safely in a binder in my collection. Look at the comparison below, you can see the identical hand written annotations in pen and red pencil, and the same foxing pattern and paper defects. Wow. Disney snagged this image from my blog for their presentation. I don't know if I'm amused or irritated. I think I'm leaning towards amused, since there's really nothing I can do, and it is sort of flattering that they used my images. Would've been nice to have been asked and/or credited tho'... I must say the funniest thing about this (to me at least) is the first line of the snipe - "WATCH YOUR CREDIT"

Looking closer at photo number one, I see another possible snag...the 40x60 movie poster in this post. Look to the left of the image of Kathy and you'll see the edge of the poster. This is a rare poster, I've never seen another one. While it is possible that Disney has one and they used its image here, it is such an unusual image and certainly not one in common use at Disney when promoting anything Alice related that I highly doubt it; they usually use the current DVD cover image. Go figure.
Posted by Matt at 12:01 AM 7 comments

Ok, I can hear you all saying, "Wait just a minute Matt, that's nothing special, that's just a watch figure." Au contraire faithful reader. This is indeed something special, in fact one of the (if not the) rarest domestic Alice figures there is. The Dan Brechner figure was produced for an extremely limited amount of time. Brechner held the license to make figures for only three years (1961-1963), and who knows how long this particular figure was manufactured. Most people are familiar with his Donald and Ludwig von Drake figures and S&Ps, but there were a variety of figures just like this one made as well. I've seen Alice, Snow White, Cinderella, Mickey, Donald, Ludwig, Donald's nephews, and more. 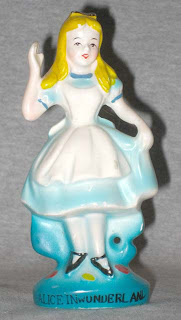 I understand how this could be mistaken for a watch figure though. The Brechner figure is a cheaper pottery, with a lower gloss glaze, and the painting is almost all overglaze, making nice examples very difficult to come by. Alice's right hand is raised, and she is standing on a thicker base with the words Alice in Wonderland around the base. 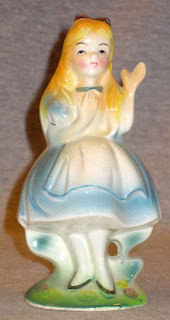 The ceramic watch figure from 1958 came with the Alice watch that just had the name Alice on the face. That figure is actually a better quality pottery than the Brechner figure, and has a higher gloss and all the painting is underglaze. Alice's left hand is raised and the base is very shallow with no words. Sometimes there is a sticker from the manufacturer on the bottom (Wales), but usually not. 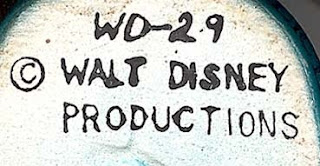 The mark on the Brechner figure consists of just the stock number (WD-29) and the standard Productions copyright. Sometimes there is a small rectangular Japan sticker.

This item is available in the Wonderland Bazaar.
Posted by Matt at 12:01 AM 1 comments

In honor of this festive back-to-school time of year (well, for parents anyway), I present to you this group of school tablets. These are about the size of a steno pad and contain that big lined paper those of us who went to elementary school in the 1960s and 1970s remember, sorta tan colored, really cheap, wide lines, so coarse you can almost see wood grain. Now all I need is that big round blue pencil and I'm all set. These come in a variety of sizes, what appears to be 50, 100, and 150 sheet tablets or thereabouts. 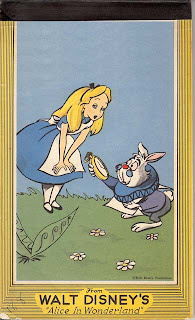 Recognize the art on these? You should, I spent almost two weeks in the Vira greeting card series, where all this art comes from. This yellow pad's art is taken from this birthday card and this get well card. 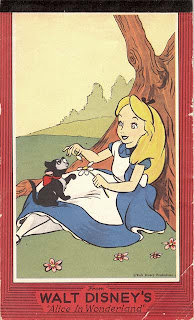 This red pad's art of Alice and Dinah is taken from this birthday card and this get well card. 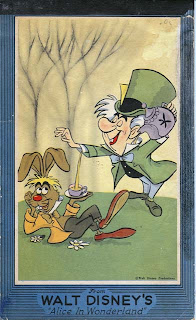 This blue pad's art of the Mad Hatter and the March Hare is taken from this birthday card (the one I don't have). 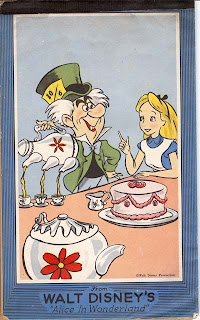 Oddly, this pad of the Mad Hatter pouring tea for Alice uses interior art from the same two cards as the yellow pad above. 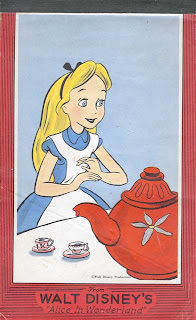 And last but not least, the red pad's art of Alice is taken from this birthday card and this get well card.

I don't know if this is the complete set of tablets, since obviously there are six different card styles, and one of these pads uses interior art, there could be as many as twelve different styles.
Posted by Matt at 12:01 AM 0 comments

Last week on eBay a seller in Belgium had 10 of these Wyler's premium puzzles up, seemed like a good time for a post.

This is the only Alice puzzle I've seen from this set, #13 featuring Alice following the White Rabbit down the rabbit hole. 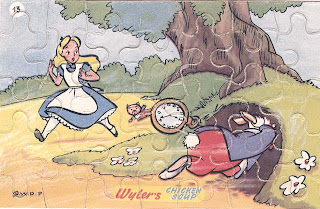 Puzzle itself is printed on very thin cardboard. Comes with a card stock picture of what the finished puzzle looks like, 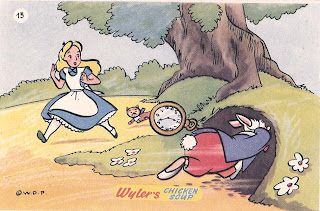 all in an illustrated envelope. The envelope is the giveaway to the puzzle's origin, it has text in both French and Dutch. These come from the mid-1950s, since Peter Pan is listed on the envelope - odd that Alice isn't. 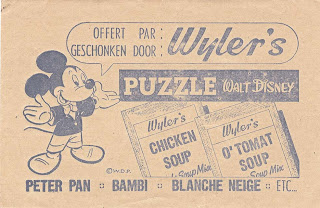 Of the puzzles I've seen, each film seems to follow sequentially in the numbers. Number 11 is Snow White, and number 16 is Peter Pan, so that leaves several numbers open for other potential Alice puzzles...but I have yet to see any other than this one.
Posted by Matt at 12:01 AM 0 comments

Photograph of the Mad Tea Party attraction, with nice clear image of the interesting designs on one of the tea cups. 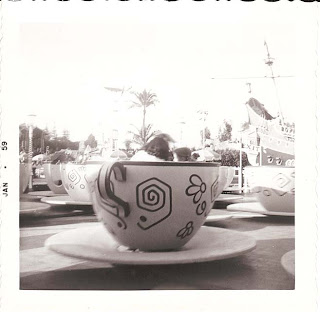 To celebrate Disneyland's 10th anniversary, the Donruss company put out a set of 66 trading cards featuring scenes from the park. 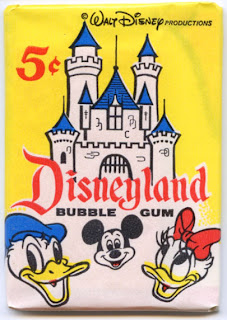 There are five Alice-themed cards in that set. And, of course, there are variants of the set: the more common puzzle back, and the far more rare blue back. This is card #7 of the set, Alice and the White Rabbit riding the Alice attraction getting ready to go down the rabbit hole. This is the puzzle back variant 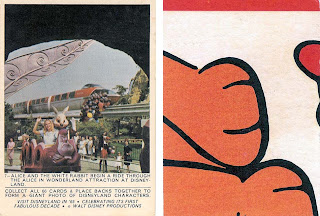 and the blue back variant 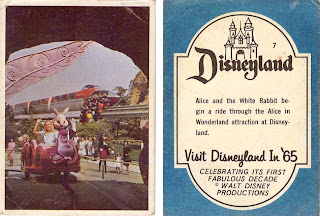 I like the blue backs better because the card front is all image, but man are they tough to find.

The blue back card is available in the Wonderland Bazaar.
Posted by Matt at 12:01 AM 0 comments 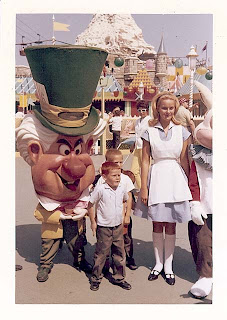 I must say those two little boys don't look that thrilled...
Posted by Matt at 12:01 AM 1 comments

Alice on the Sea of Tears Concept Drawing

Another of my favorite pieces of pre-production art is this nice drawing of Alice in the bottle on the Sea of Tears. 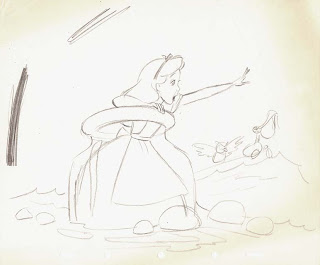 There was no accompanying studio documentation with this drawing so I don't know if it is a layout or just a concept drawing, but very nicely rendered just the same.
Posted by Matt at 12:00 AM 0 comments

I love pre-production art. And I especially love the King of Hearts (he was my lucky charm on my wedding day). So I am particularly fond of this layout drawing of our little friend. 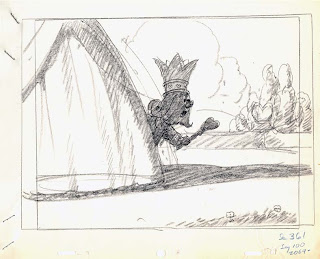 According to its accompanying studio documentation, this is the scene where the King is fretting about the goings on at the croquet match, when the Queen misses her shot - or rather when the card wicket fails to position himself correctly. 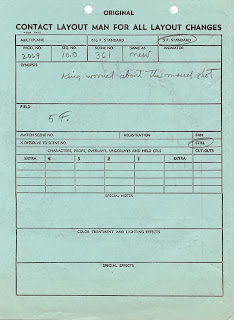