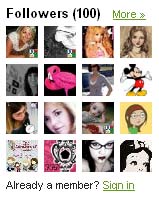 Hard to believe, almost three years, over 500 posts, just under 200,000 page visits, and now I've hit the 100 follower milestone!  Thank you to all my readers and followers, I look forward to many more years of posting!
Posted by Matt at 3:25 PM 8 comments

This is one of those things I had known existed for a long time, but never thought I'd own.  This is the in-store advertising poster for One Hour in Wonderland, sponsored by Coca Cola. 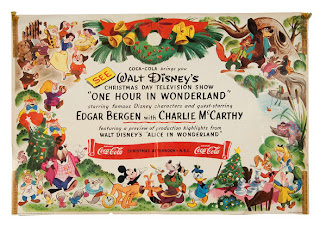 This was distributed to Coca Cola retailers in the weeks leading up to Christmas for display, usually on windows judging by the adhesive tabs present on the front of the poster.

I first learned of this poster when my friend Paul over at the Disney History Institute saw one in a shop about 20 years ago.  He took a photo of it for me.   About 5 years ago I managed to acquire two in a lot, this being one of them.  It is about 16x24 and very colorful.  I am also aware of another version of this poster, much larger, 41x59.  I do not have that one, but as the image is exactly the same, I'm not that concerned.  Well, ok, I do want it, being the ultimate completist, but having the small one does alleviate my suffering somewhat.

This poster is quite rare, which is a little surprising to me.  Coca Cola advertising has always been avidly collected, and this being both Coke and Disney, I would have thought lots more would have been saved over the years and made available on the collector market, but such is definitely not the case.  I have only see four of the small posters in the last 22 years, and two of the large - I'm not even sure if the two large posters I saw were not the same poster.  Compared to other 1950s Coca Cola advertising posters, that is ridiculously rare.

Merry Christmas to all my readers, may your holidays be filled with cool Alice stuff!
Posted by Matt at 12:01 AM 8 comments

One Hour in Wonderland Promo Photo

As featured on the cover of the TV Forecast from yesterday's post, here we have the promo photo itself. 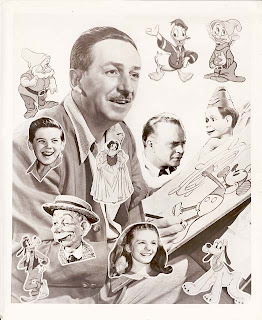 The photo features all the guest stars of the show in cutout form, and the snipe on the back lists details of the show.  Again notice the handwritten identification of Walt Disney as a Cartoonist.  Very odd. 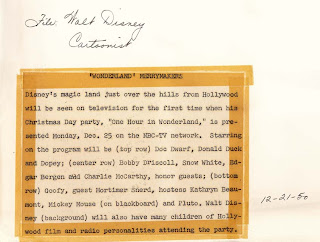 Back in the days before TV Guide, local newspapers or regional periodicals produced their own TV schedule magazines.  This is a copy of one such magazine, TV Forecast for the week of December 23, 1950, for the New England region, specifically Boston and Providence. 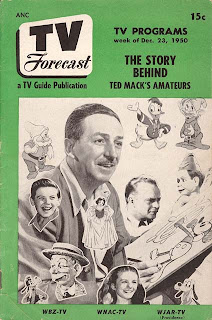 This is particularly nice in that it sports a cover of Walt with cutout photos of all the guest featured on One Hour in Wonderland, including a tiny head of Kathy at the bottom. 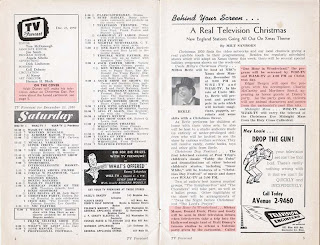 Inside features a quick blurb about OHiW, and a small paragraph featuring a few more details.  I find it interesting that they keep referring to Walt as a cartoonist rather than a film maker. 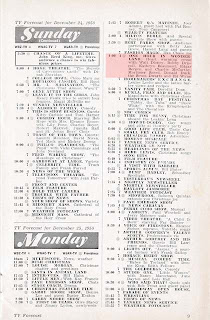 The listing itself offers a few more details about cast appearing.  By and large, this issue has quite a bit on OHiW, more so than most publications of the day.  See how it compares to another copy of the same magazine, TV Forecast, this time for the Great Lakes region. 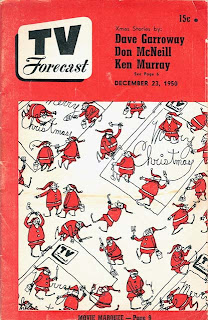 The cover is completely different, and there is only a single mention of the show outside the listing itself, which is little more than an ad.. 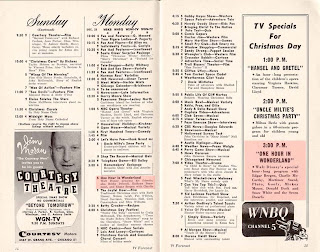 I sometimes wonder what the world was like back then, when someone with the fame and power of Walt Disney was entering the new media world of television, and the majority of the TV news seems to have pretty much ignored it.
Posted by Matt at 12:01 AM 2 comments

The Walt Disney studio promotion machine got off to an early start in its promotion of Alice in Wonderland, as this cover to a national toy publication shows.  This is the December 1950 issue of Playthings magazine, featuring a cover of Mickey Mouse announcing that the news for 1951 was Disney's Alice in Wonderland. 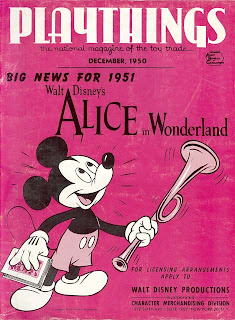 The interior has only one Alice item, a full page ad promoting the fact that the entire year of 1951 was to be dedicated to Alice, starting with the Christmas Day TV show One Hour in Wonderland. The article states that the promotional campaign around Alice was to be Disney's largest ever, and that is probably true.  It is clear from the documentation that I have seen that Disney put a lot of effort into promoting Alice. 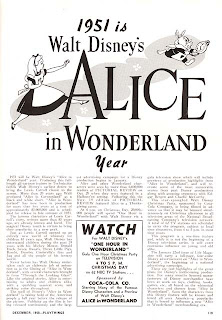 The article has some very interesting statistics as well, stating that at press time 62 television stations were slated to air the show, with an anticipated viewership of 20,000,000.  Sounds like a lot for 1950, especially on Christmas Day.
Posted by Matt at 12:01 AM 1 comments

This week I came to the realization that we are entering the 60th anniversary season for Alice in Wonderland.  And to kick off that season I present to you the Walt Disney Productions corporate Christmas card from 1950.

This is one of my favorite pieces of ephemera from Alice.  The cover is very cool, picturing Mickey, Minnie, Donald and Pluto as they watch Alice and the White Rabbit turn the pages of a copy of Alice in Wonderland.  But the best is to come inside.

A full calendar for 1951 is pictured inside, with fantastic art of the Mad Tea Party, with denizens of all parts of Wonderland celebrating the holiday season.  What better way to start of the new year? 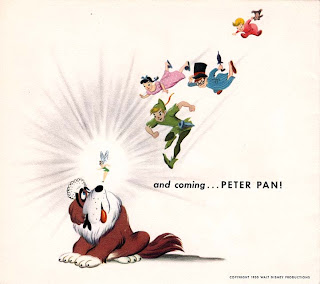 The back of the card teases with a glimpse of the upcoming feature Peter Pan, featuring a brunette Tinker Bell!?
Posted by Matt at 12:01 AM 1 comments

I'm beginning a new series, the Mickey Magazine series.  I have recently completed my set of French language issues containing the Alice serialization, and will be posting once per week on the dates they were originally published starting with #69.  I previously posted the first appearance of Alice in Mickey Magazine in #57.  The next issue to feature Alice content is #61.  I will usually only post the French editions as most of my Dutch issues are in a bound volume and are difficult to scan.  If I do have a loose Dutch issue (like with #57) I will post it. 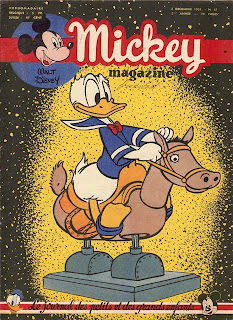 The content in this issue is only one page, an interesting promotion for the upcoming serialization.  I like how the illustrations mimic the pages of a photo album. 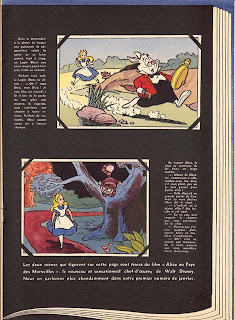