Model Sheet of Alice from February 1950 - a Recent Addition!

Over the years I've been very successful in finding model sheets of many of the characters from the film, including some very odd ones indeed.  And as one might expect, there were several of Alice herself.  But for the past 32 years one of the Alice sheets has eluded me, but no longer!  Sheet 250-7 is finally in the collection! 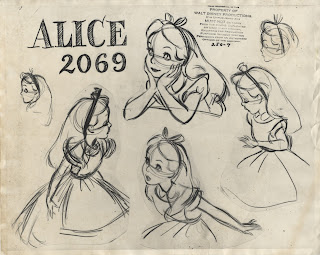 This sheet has a couple of very famous poses, most - if not all - taken from the Caterpillar sequence.  The central image is of Alice leaning on the mushroom listening raptly to the Caterpillar, and the image just below it is of Alice saying "...who you are first?"  Feels good to finally have this sheet after so many years.

This is truly spectacular.  This is a copy of the Sunday News, the Sunday supplement of the New York Daily News from September 9, 1951.  That in and of itself is not that spectacular, even though it does have a very nice cover featuring Anne Francis of Forbidden Planet and Honey West fame. 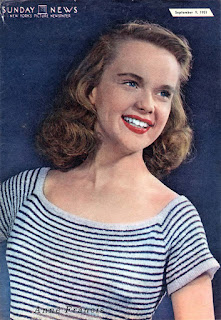 No, the spectacular part is on the very next page, the inside front cover to be exact, which sports - in glorious full-color rotogravure - an amazing photo of Kathryn Beaumont speaking animatedly to her Wonderland friends in doll form.  I do find it amusing that whoever wrote the caption got the two rabbits mixed up. 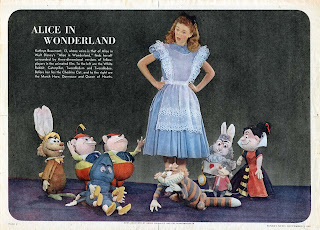 These dolls have appeared before in several black and white photos, and while it is never clear what exactly they are, it now seems UN-likely that they are Lars of Italy (thanks to the keen eye of uber collector Mel Birkrant).  They could be custom made just for the studio or even by the studio, but regardless, this is just an amazing image.  And a rare full color image from the time.