This is a cool little cel, once of flowers from the Live Garden, looks to be a mum. 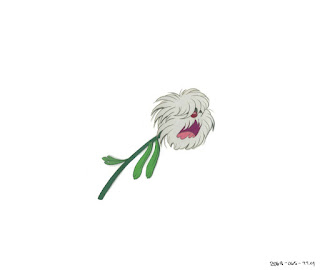 This little guy appears in the scene where Alice is fleeing the mean flowers and it barks at her on her way out.  I like the fact that this is a full cel and retains it notatations in the lower right corner.
Posted by Matt at 12:00 PM 5 comments

Something a little more recent, from 1974, the original art for the cover to the Walt Disney Comics Digest issue #46, featuring (you guessed it) an Alice cover! 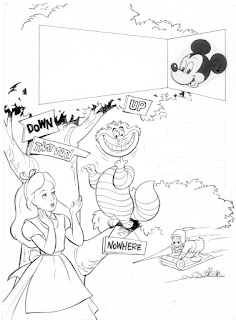 When Disney was prepping to re-release Alice in 1974, they pumped out almost as much marketing and merchandising as they did in 1951 since it had never been re-released till that time.  This digest contains part of the FC 331 story, which would be continued in a later issue.  But this is the only issue that had Alice on the cover. 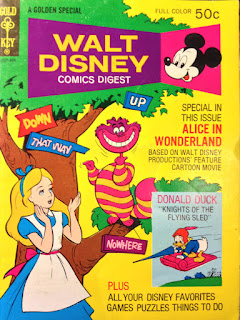 The last of the comparison photos, this time Alice again!  Poor Kathy was so tormented by the animators during the live action reference filming. 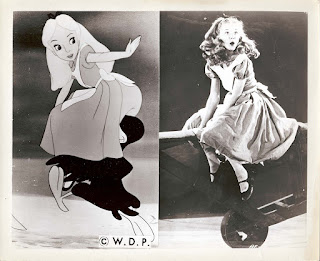 Never has Disney cast a better voice.  Ed Wynn's lispy Hatter is just fantastic.  And his improv skills proved better than the writers as his live action reference footage from the Mad Tea Party was so good, they used it as the vocal track rather than the studio recorded version. 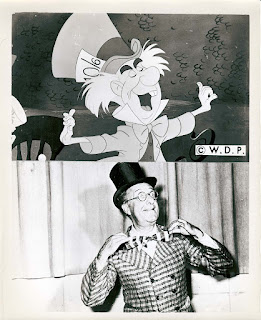 While he later went on to portray Uncle Albert in Mary Poppins, he will always be the Mad Hatter to me.
Posted by Matt at 12:00 PM 1 comments

The March Hare is the epitome of Jerry Colonna's crazy personality - or is it the other way 'round? 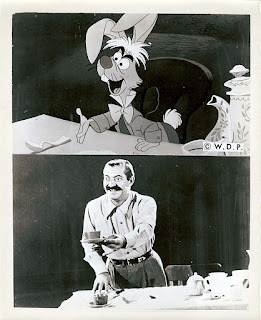 Regardless, they couldn't have made a better casting choice for this character.  "Just half a cup if you don't mind."
Posted by Matt at 12:00 PM 0 comments

This particular image was very popular during the months preceding the release of Alice in 1951, it was featured in several magazine articles promoting Disney's latest all-cartoon film! 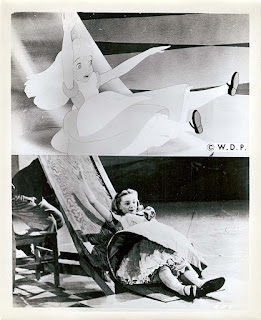 I must say I do love images of the various tortures they put Kathy through during her live-action reference.
Posted by Matt at 12:00 PM 2 comments

Sterling Holloway's toothy grin perfectly suits this comparison still with the Cheshire Cat.  I must say I think his performance is pretty damn special. I know he was the voice for many characters over the years, but to me (not surprisingly) this is his best. 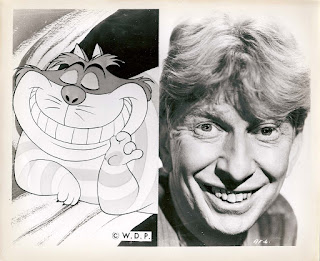 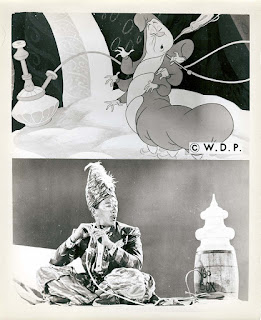 I just love that they dressed him up in turban and such, but I don't know what the writing on the 'hookah' means, do you?
Posted by Matt at 12:00 PM 2 comments

A long time ago I found a still that had lots of little tiny images of the various actors with their animated counterparts.  Recently I came across the full size still for several of those images, so let's have a series!

First up is, of course, Alice! 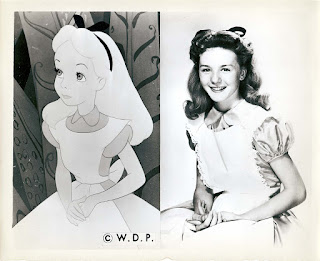 This still was used a lot back in the day, and the image of Kathy was practically ubiquitous.  But nonetheless, a cool still.  The animated Alice appears to be from the Caterpillar sequence based on the leaves in the background.  Haven't had a chance to find the exact image in the film, perhaps later in my voluminous spare time.
Posted by Matt at 12:00 PM 2 comments

I've spoken a number of times here on the blog about the Dell Four Color comic that adapts the film, #331.  It was one of the - if not the - earliest Alice items I collected.  But did you know that Dell issued a poster to advertise its publication?  I acquired this poster in the early 2000s (the naughties) directly from Disney through their Disney Auctioneers program.  Those were the days let me tell ya.  Back when the company was selling treasures from their archive with no oversight whatsoever. 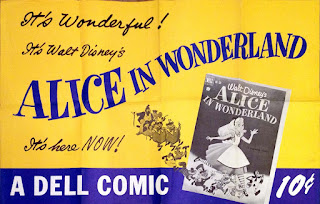 Promotional materials for comic books is nothing new, and companies have done it for decades.  I remember that brief time in the late 1980s when I worked for a comic book distributor  we got all kinds of promotional materials, from posters to flyers to buttons announcing the latest and greatest from all the publishers.  And apparently Dell was no exception. The humongous poster - a whopping 28x44, bigger than a one-sheet - just goes to show exactly how hard everyone was pushing the film.
Posted by Matt at 12:00 PM 0 comments

I love this little storyboard, the Mock Turtle just looks so shocked, or maybe stunned.  Whatever is supposed to be going on in this scene, he was clearly not made aware of it in advance. 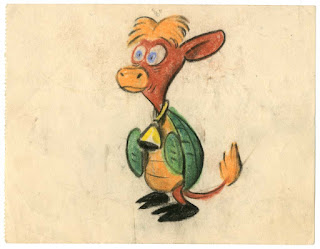 I don't know who did this particular piece of art, but if I had to guess I'd put my money on Bill Peet.
Posted by Matt at 3:36 PM 1 comments

One From the Wall - Alice Studio Setup with Walt Signature

We've recently acquired one of our Holy Grail items here in the Tulgey Wood, a Walt Disney signed cel setup. 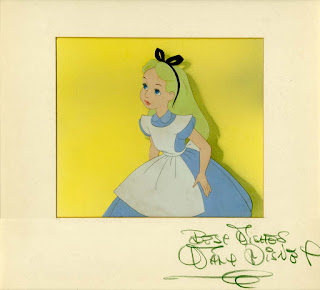 I love this cel. It is from the very first sequence that was animated, when Alice encounters the Caterpillar.  Several things mark this as such. First, Alice's face is rounder and more childlike than in the rest of the film.  Second, the color of Alice's collar is a lighter shade of blue than the rest of her dress. One can only assume that it was (wisely) decided that it would have been way too much trouble to animate her dress that way throughout the entire film. Third (but only audibly) Kathy's voice is much younger sounding in this sequence than in any other. 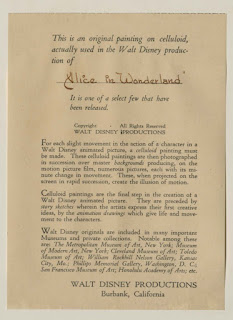 I've always wanted a cel from this sequence, and a Walt signed cel?  Killed two birds with one stone with this acquisition. 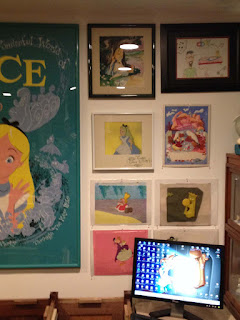 I also figured something out, like a bolt from the blue.  Remember this cel setup from before, the one that Walt *almost* showed on national television? 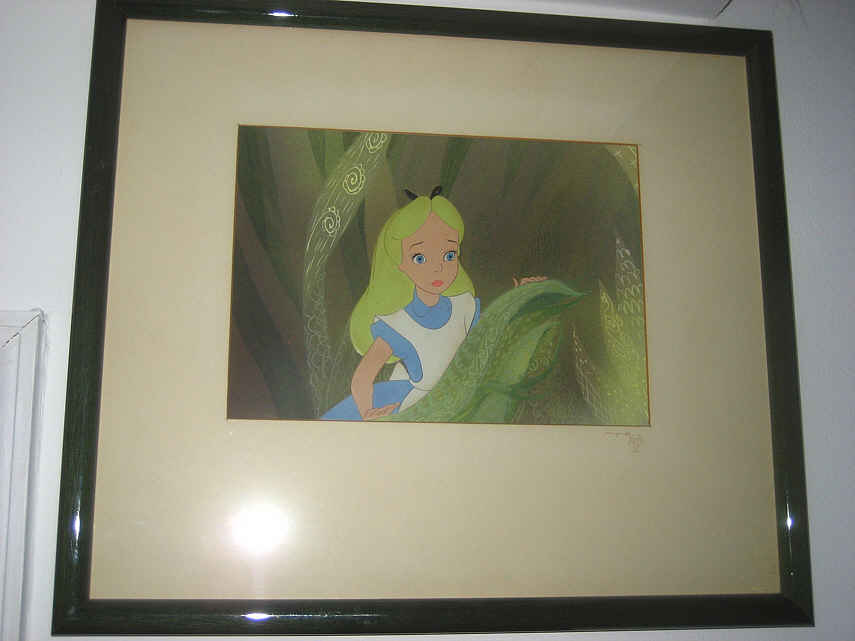 I always wondered why the mat board at the bottom was so much wider than at the top.  And now I know:  To allow for Walt's enormous signature!  Guess he just never got around to signing my other setup.  Oh well, probably a good thing, it would've cost me a whole lot more than it already did!
Posted by Matt at 12:00 AM 5 comments

So we may be done with Sweden, but I have one more Scandinavian poster to share, this time from Denmark. 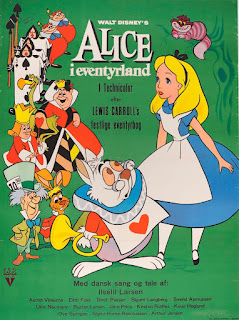 As will all these foreign posters, I usually don't know the proper language-correct name, so I'm calling this a 1-sheet. I like the colors very much, one of the most vivid I've seen.  And again, I like how they mimic the wonky Alice font.
Posted by Matt at 12:00 AM 1 comments