Today the family and I are at the Walt Disney Family Museum visiting the Mary Blair exhibit.  Seems a perfect time for this post.

What a great photo.  Kathy at her cutest holding a little kitten.  And just look at that art! 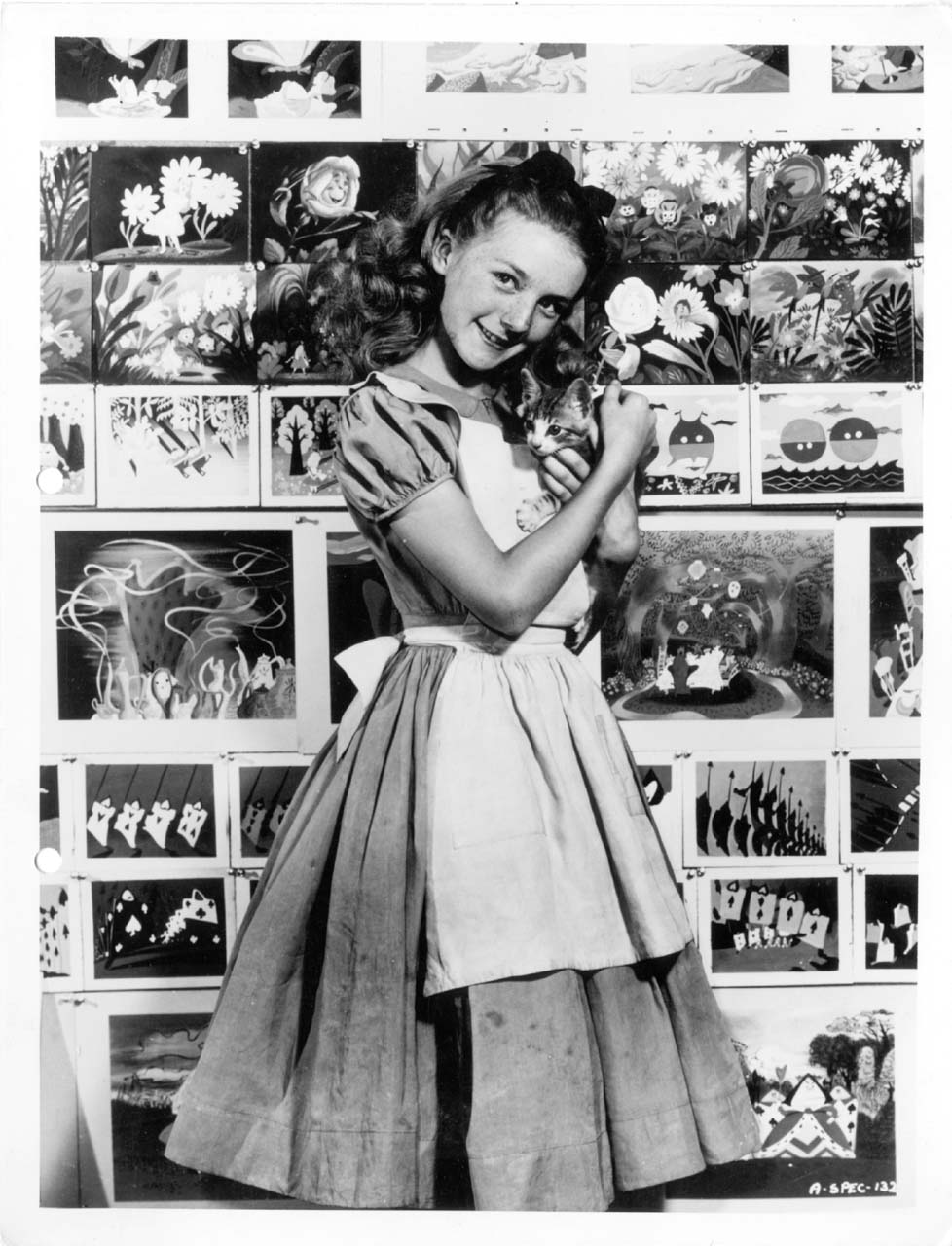 It is a Mary Blair extravaganza behind her.  Oh to have even one of those.  Many of them I've seen cross the auction block in the past few years, how many can you recognize?
Posted by Matt at 12:00 AM 0 comments

I don't normally do things like this, but this is bugging me. RR Auctions is having an animation auction that closes tonight. One particular lot is very clearly mis-attributed, the claim is that the lot listed is David Hall, and art by him is very sought after. I've contacted them about it and they agree and said they'd change the listing "...appreciate your email and we have decided to change the lot details to state that it is not a David Hall as you have stated." They haven't. By not changing the listing after they'e been alerted to the error and agreed, they are now actively deceiving their bidders. I don't know how else to proceed, so I thought I'd see if leveraging the social networks might get them to fix the listing before it is too late. It may already be too late.

I know when I was a kid the only souvenirs I wanted when I went to Disneyland were gloves.  Nothing like gloves in bright and sunny southern California. 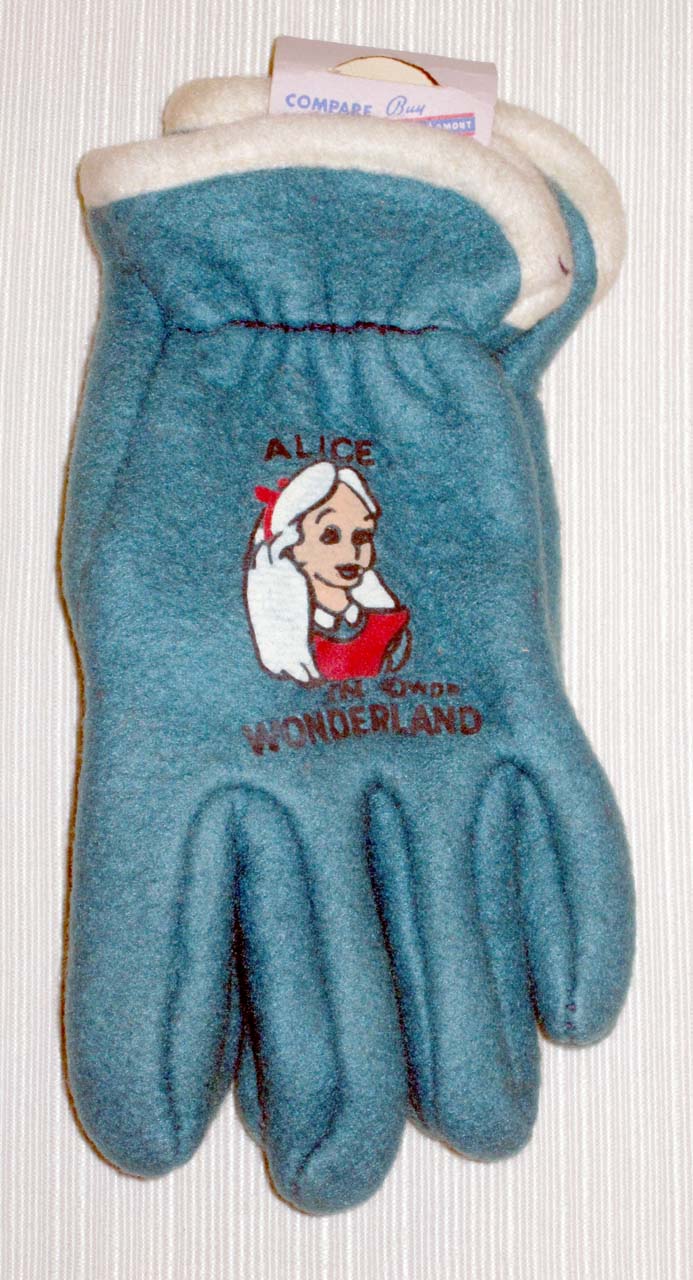 These gloves are particularly cool as they have a very nice illustration of Alice on each one.  Made by Wells Lamont of Chicago, I do imagine that for those kids visiting from colder climes these would indeed be a cool souvenir to take back home with you. 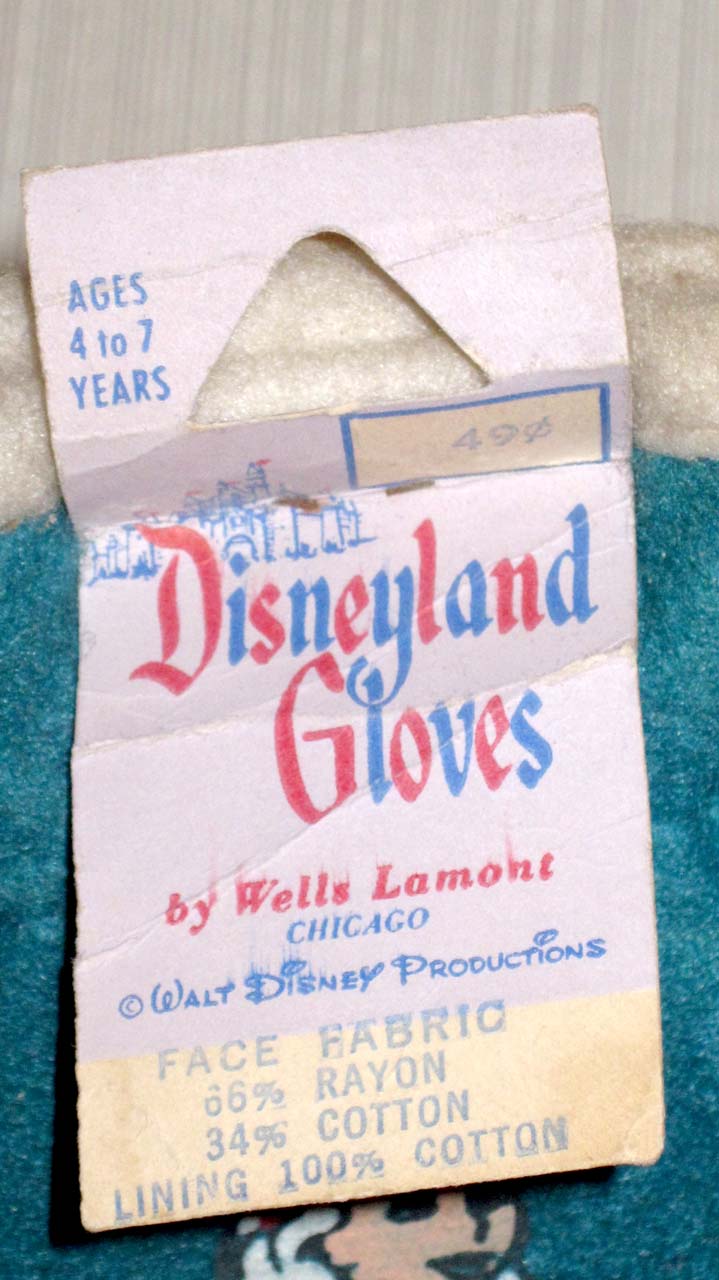 This particular example is very nice in that it has its original tag with price (49¢).  Wells Lamont held a license for gloves for 11 years (1958-1968), so it would be pretty tough to nail down exactly from when these come, but the style of the Disney copyright says late 1950s to early 1960s to me.

Hey, I Made Some (Virtual) Ink! 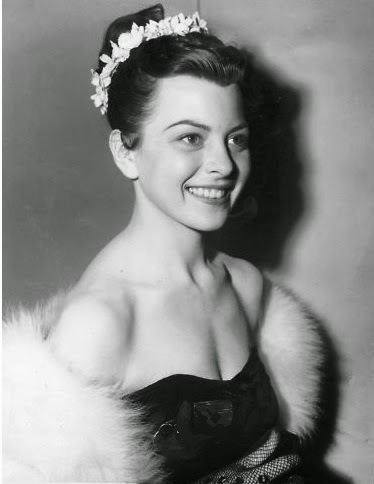 Today at the Walt Disney's Robin Hood blog there is a beautiful photo of Joan Rice as she attended the Alice in Wonderland premiere in London.  Joan played the part of Maid Marion, and as the film had just started production was certainly available for the Alice premiere.  And, the blogmaster gave me a very nice shout out.  Right back at ya Clement Glen!

For those who have not be exposed to the live action Robin Hood, it is a very nice film, and holds a special place in Disney history as it was the first film shot in England, using Disney's money that was 'stuck' in the UK from the war years.  The Robin Hood blog is a treasure trove for fans of that film, and even for those who may be new to it.  It is in my opinion one of the best Disney film blogs out there.  Run, don't walk, to check it out right now.
Posted by Matt at 4:11 PM 1 comments

How cool is this?  I don't know what exactly this is, I can only assume that it was some sort of in-store promotion, but this is the Alice Finds the Garden of Live Flowers Little Golden Book with a Mouseketeers Alice in Wonderland wallet attached to the front cover.  The wallet is in some sort of plastic sleeve - which is barely there - which is in and of itself unusual. 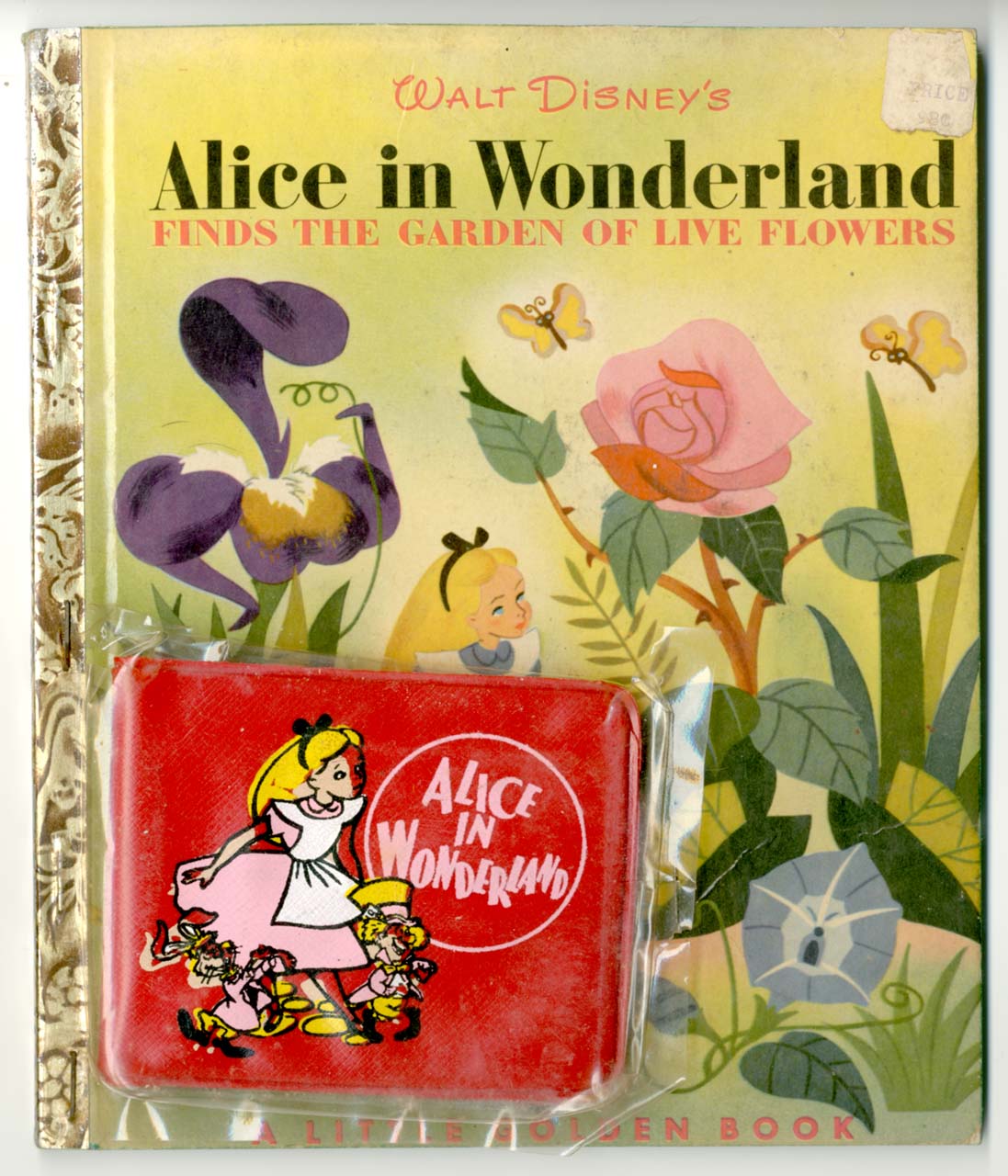 The LGB only has an A printing, and the Mouseketeers did not come into existence until 1954 with the Mickey Mouse Club, so there must have been a TON of these books printed and some store was using them as a promo to sell more wallets, or vice versa.  Regardless, what a neat find!
Posted by Matt at 12:00 AM 0 comments

The second of the Scandinavian books, this time from Denmark. 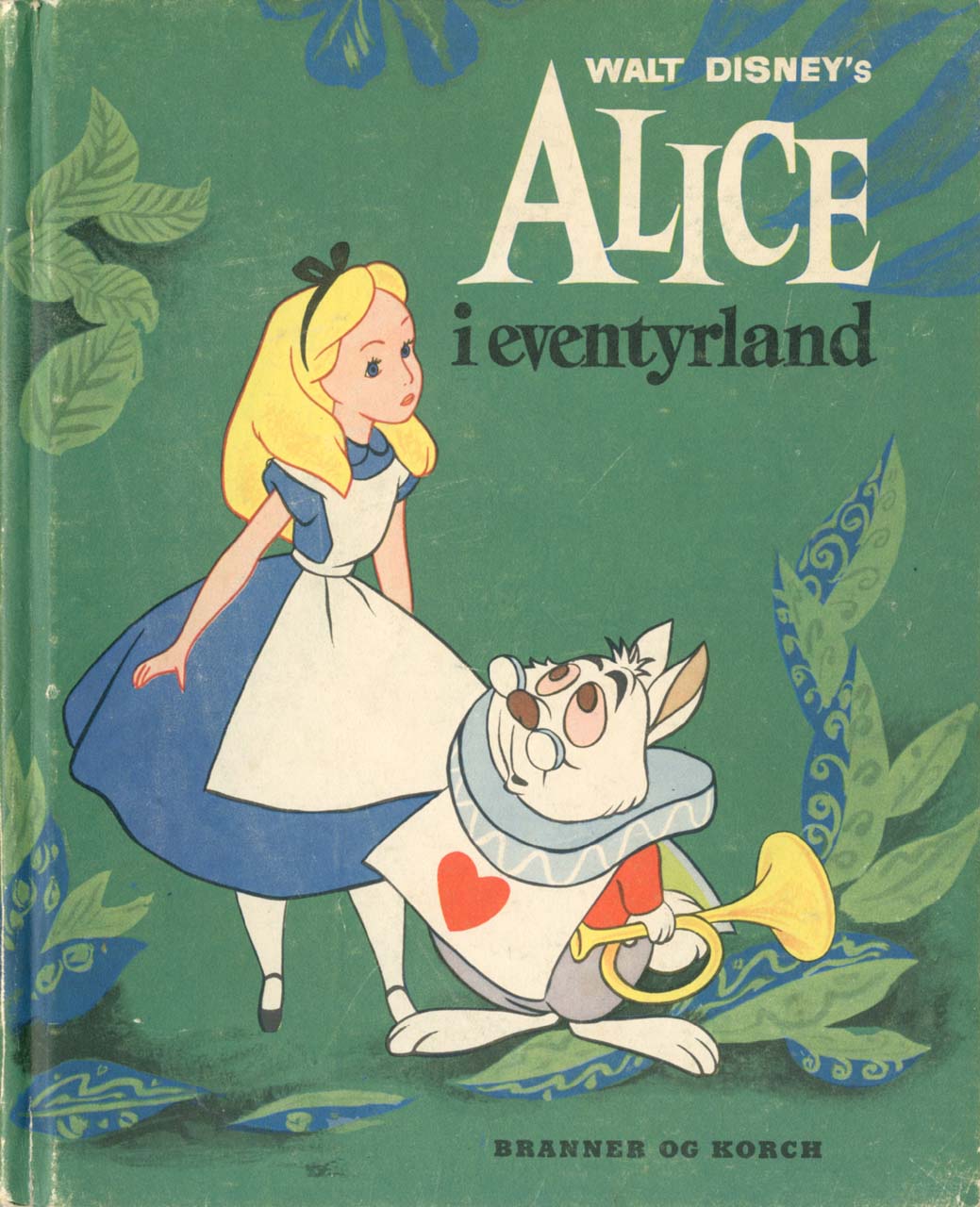 I especially like the title page with its red and blue Alice logo. 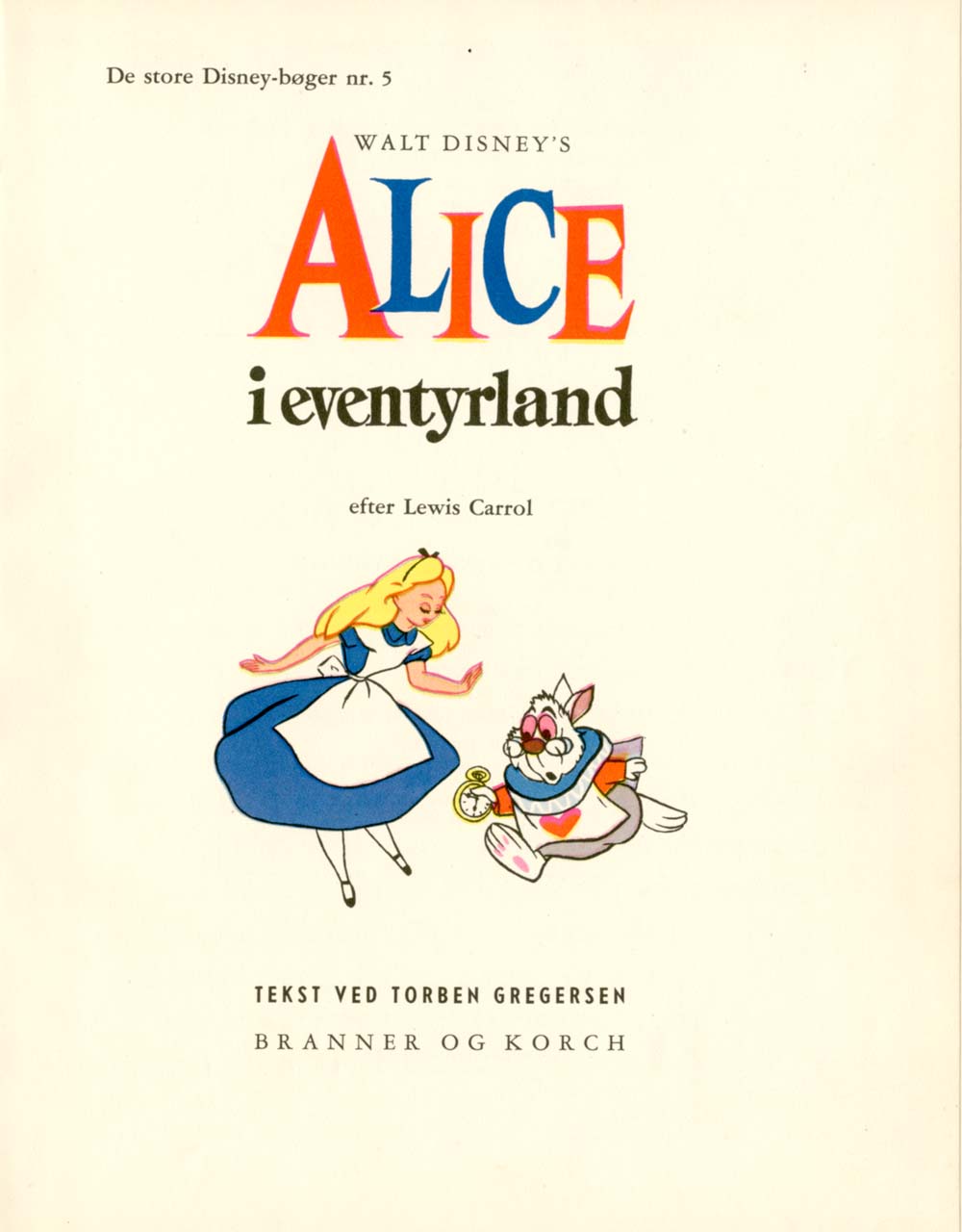 This Alice book was fifth in a series of Disney books (The Great Disney Children's Books according to Google translate) that included Dumbo, Pinocchio, Cinderella and 'Stampe' which I'm going to assume is Thumper but I cannot be sure. 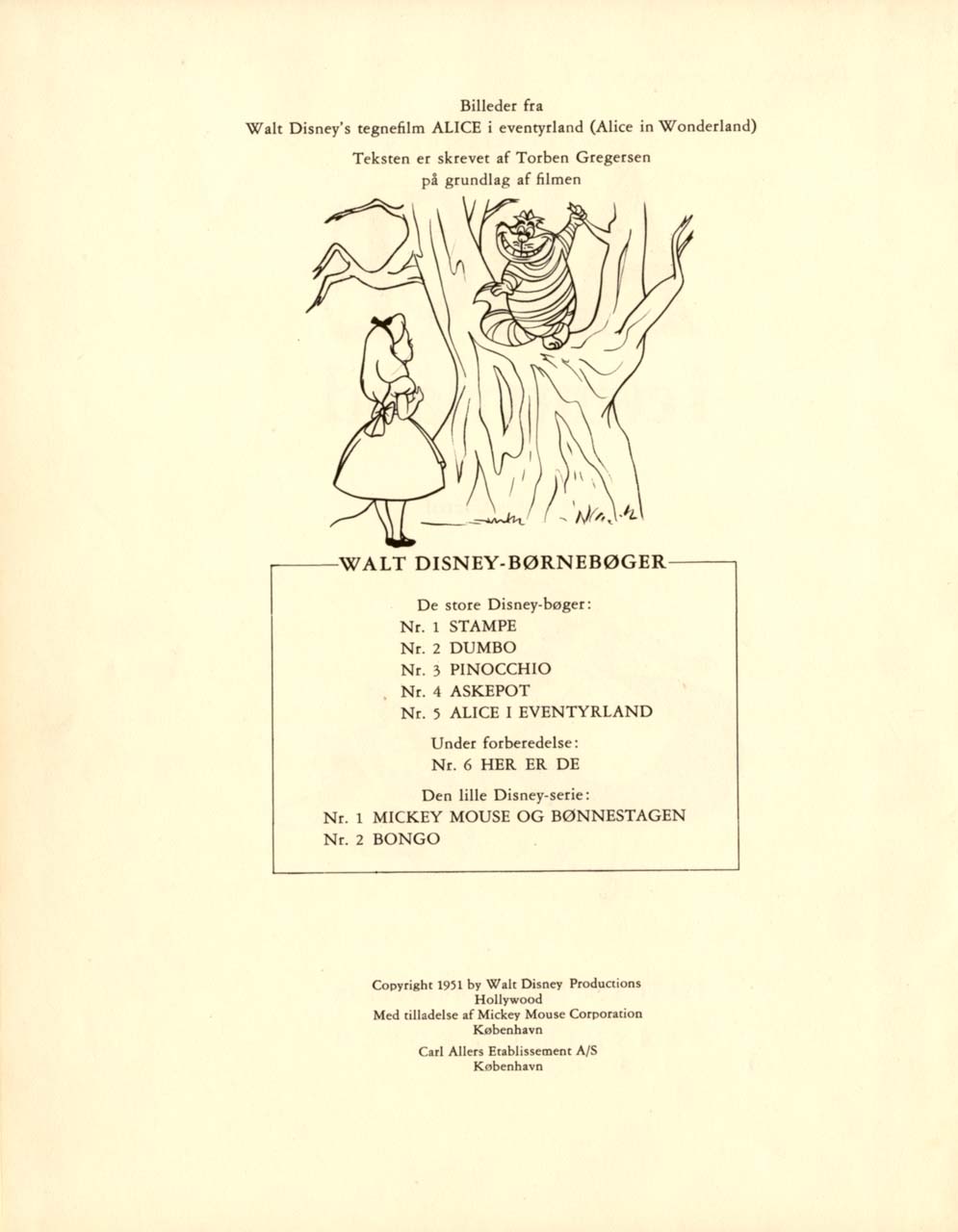 One of two books from Scandinavia featuring the same contents (in native languages of course), this copy is from Sweden. 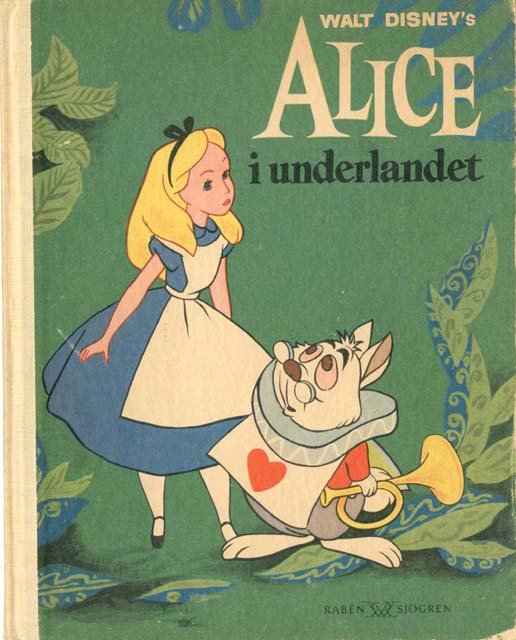 The interior art is a mix of full color and line drawings, and appears to be similar (if not the same) as that of an English book by Dean that I've not yet blogged about. 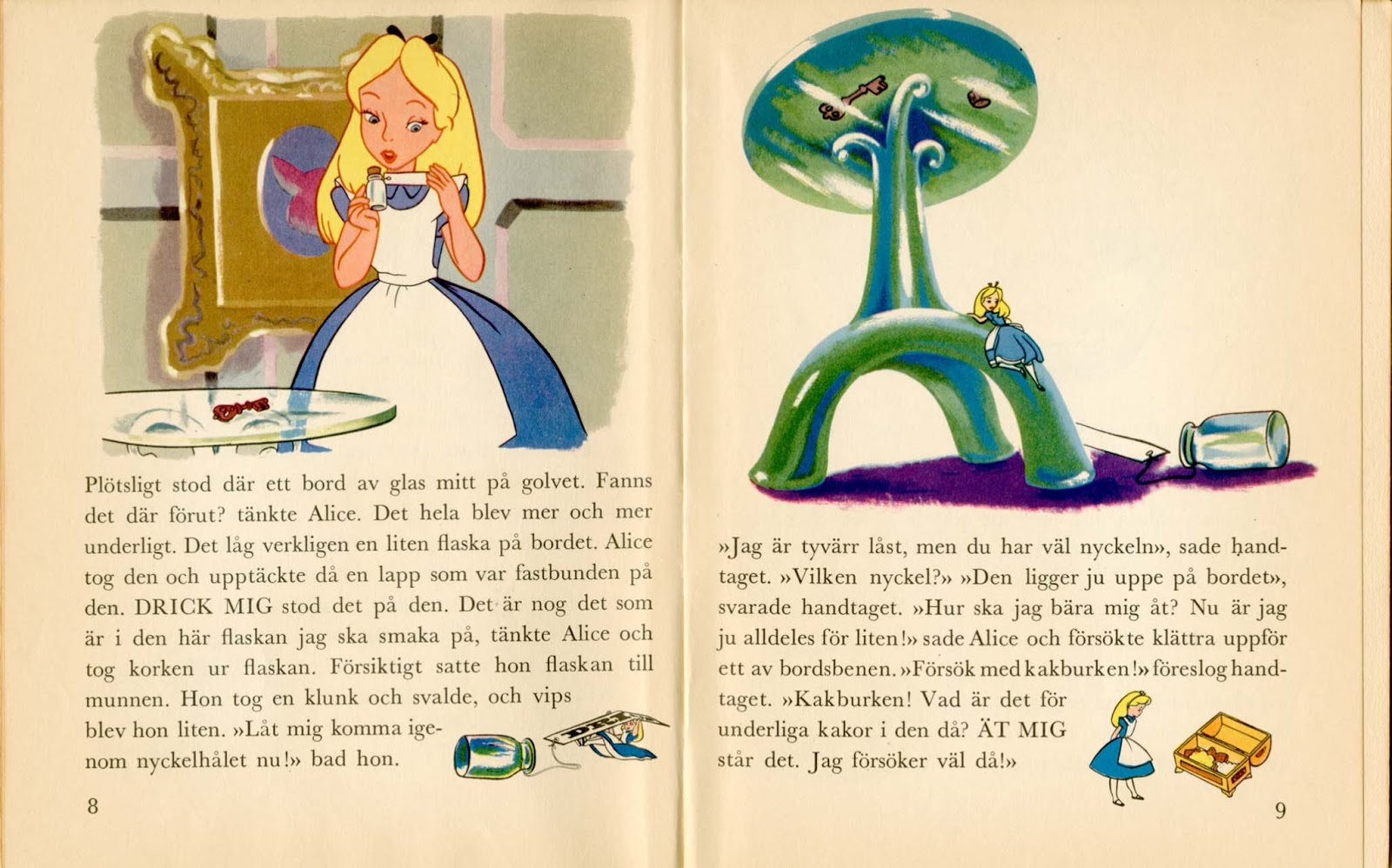 Roughly the size of a Little Golden Book, this is only one of two copies I've encountered in all my travels. 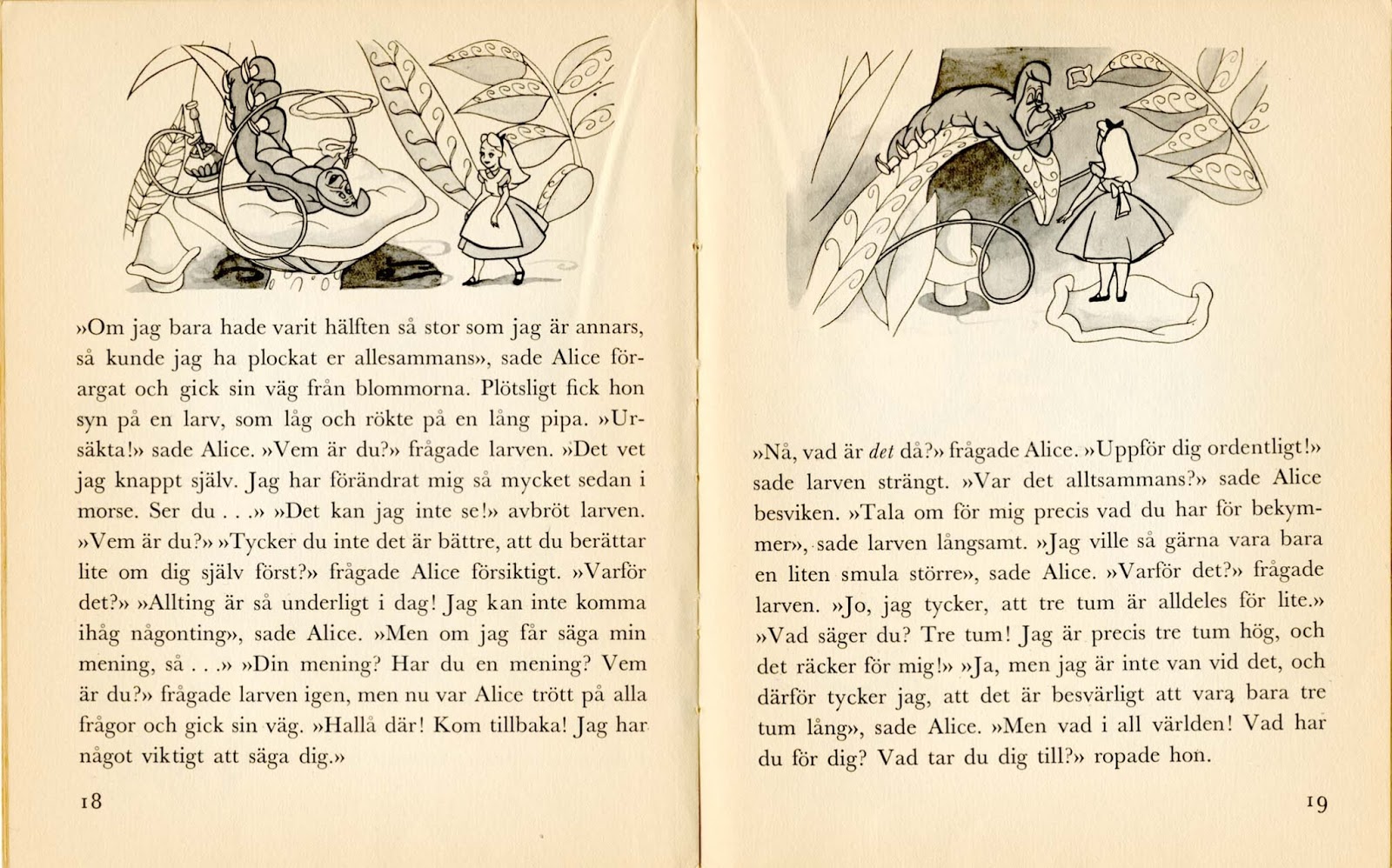 The last of the fabric posts - until I find something new.  This stuff just screams the 1970s to me, but please correct me if I'm wrong.  It is some sort of jersey-like material, very lightweight.  So far I have found it in two colorways:  white 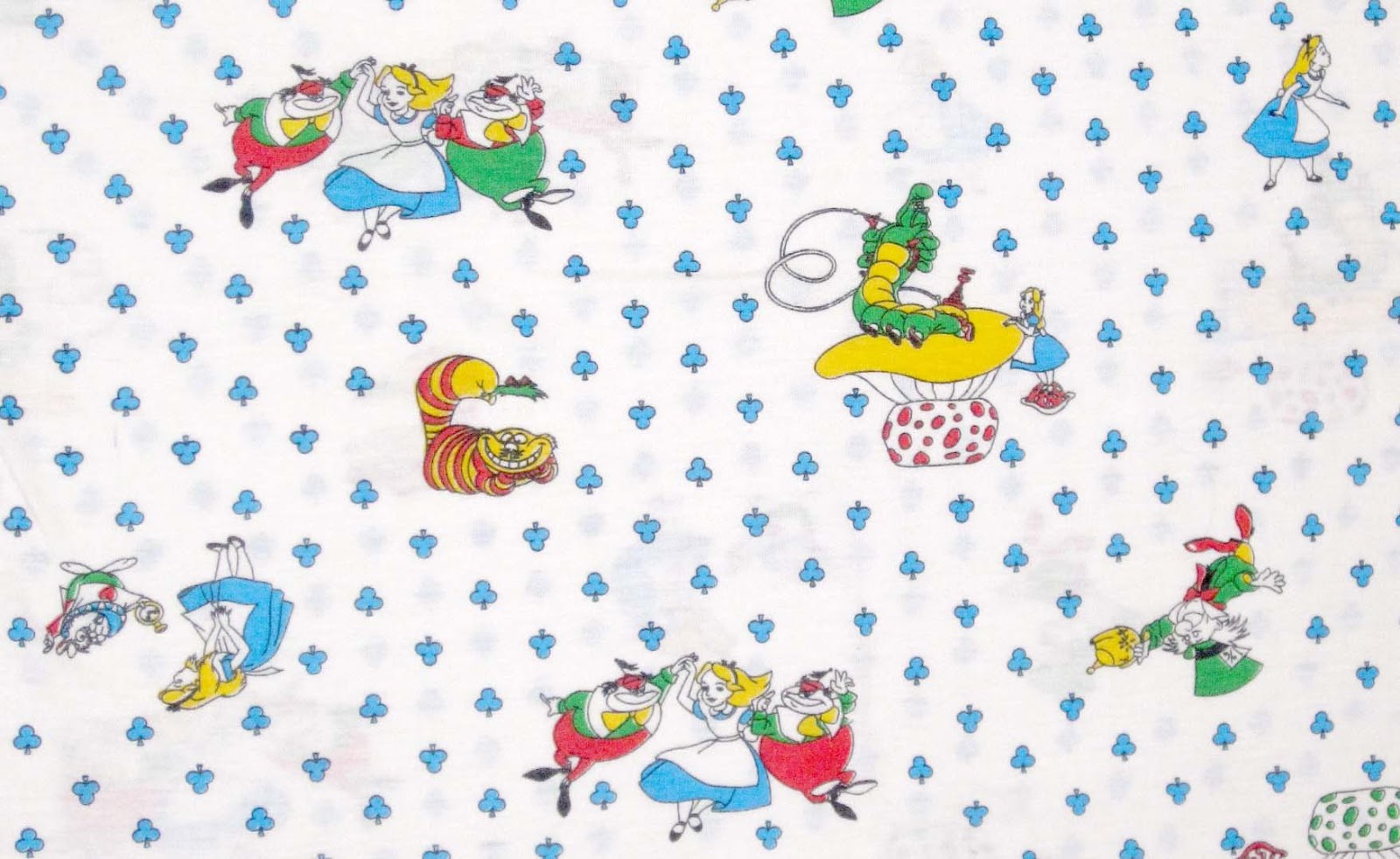 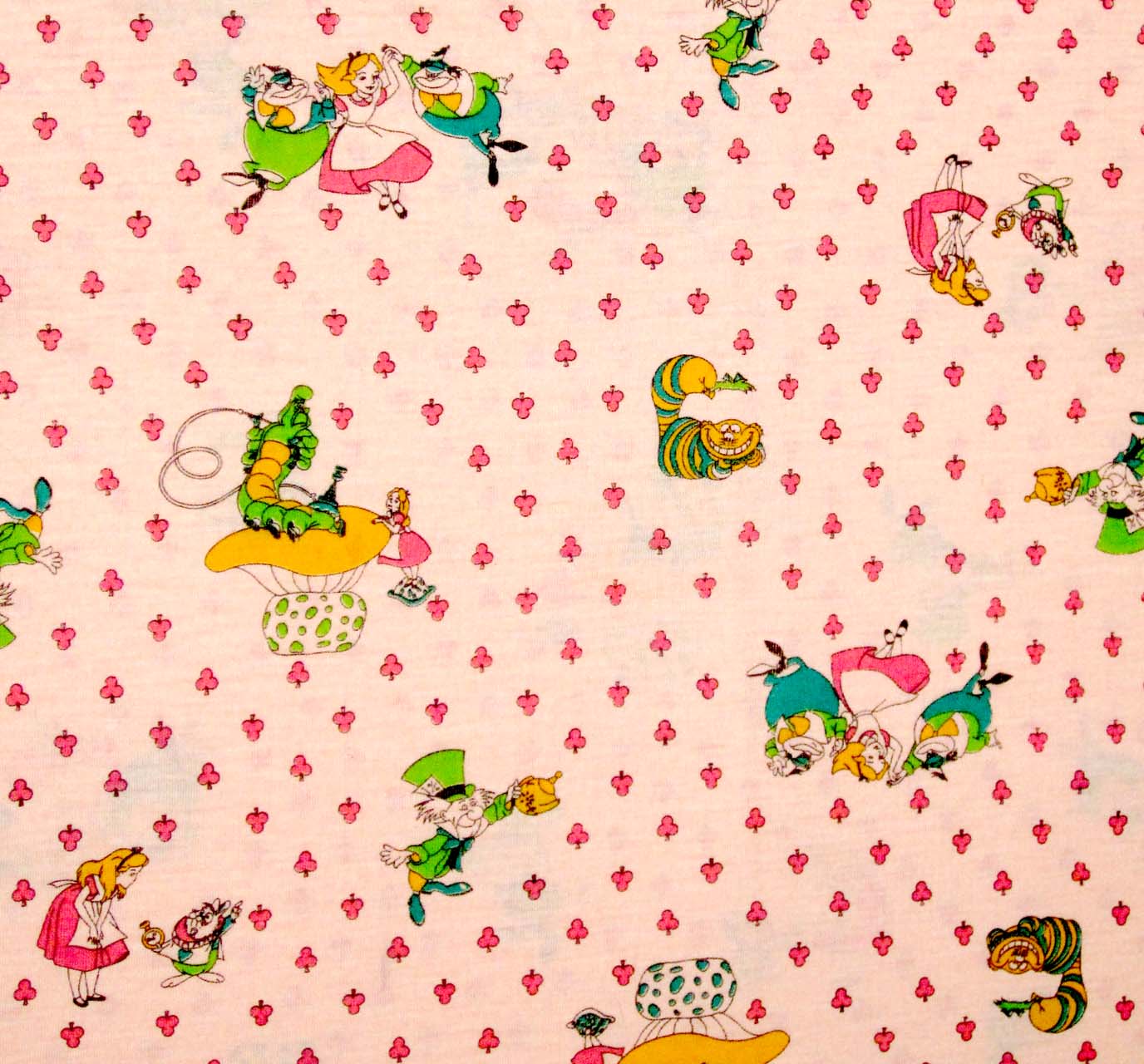 And I've even found two homemade items in it, one of each color.  A blouse or pajama top in the white 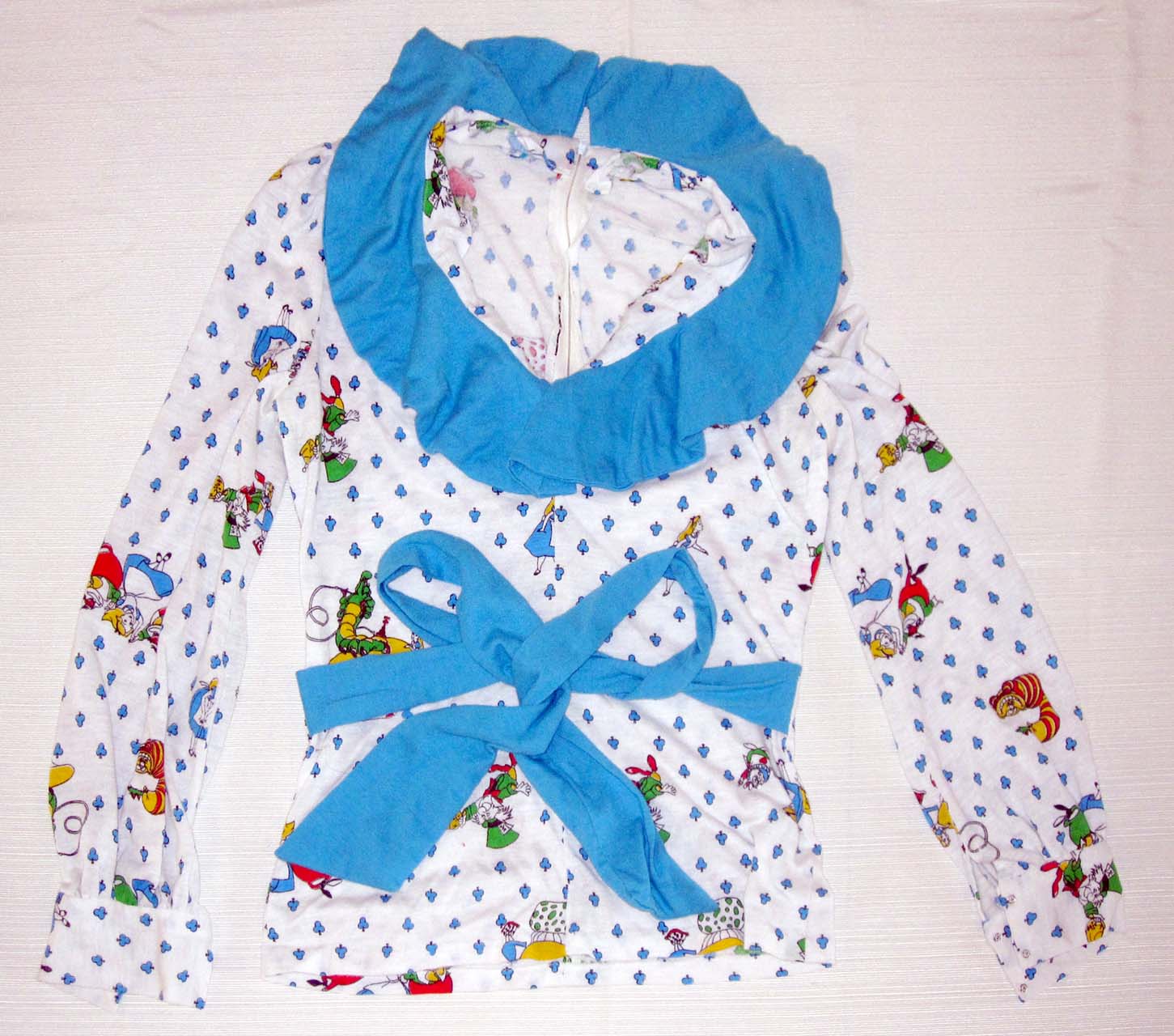 and a baby blanket in the pink 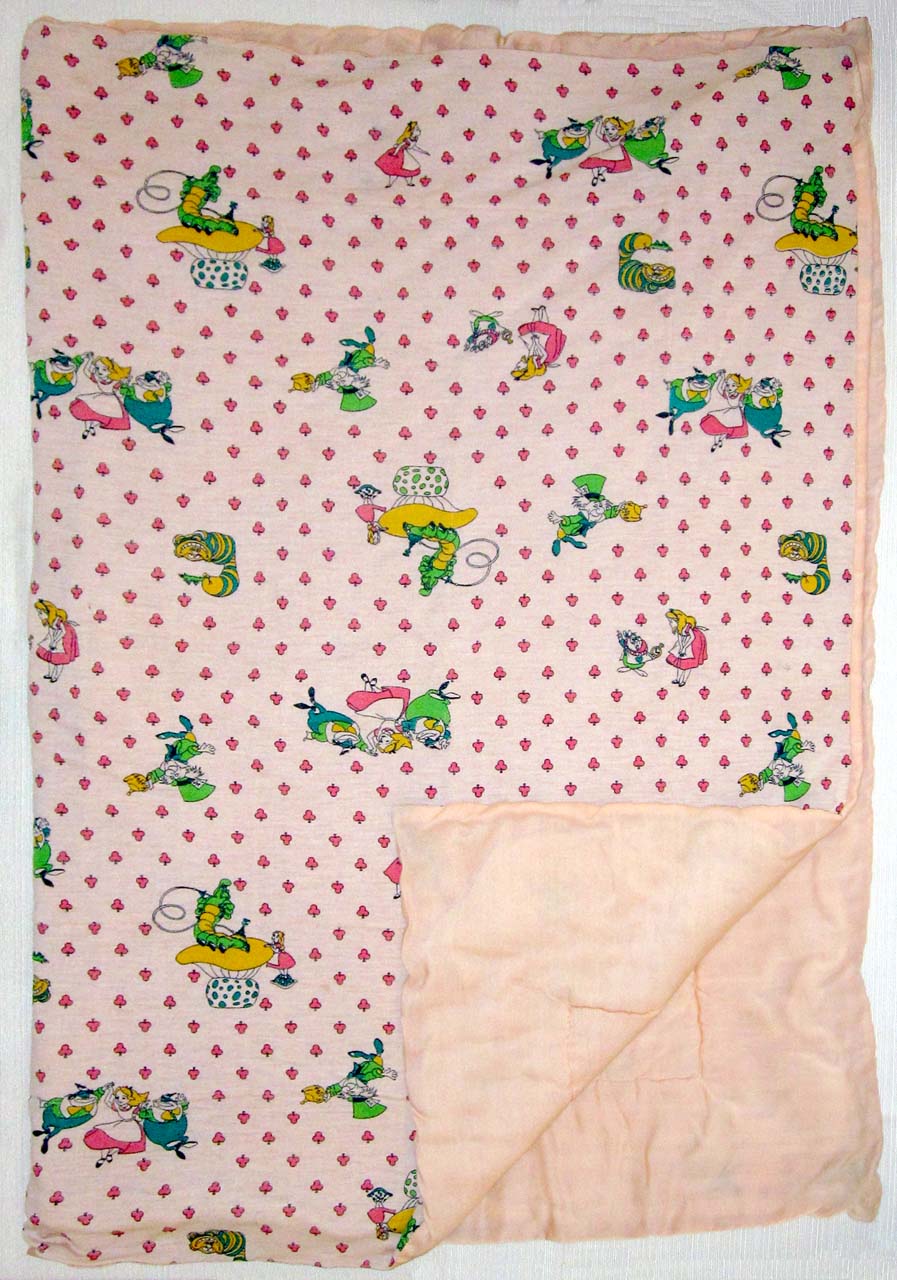 Another Bates fabric, probably from the same era, is this very neon example featuring Alice in a number of poses with some rose trees that have been painted red. 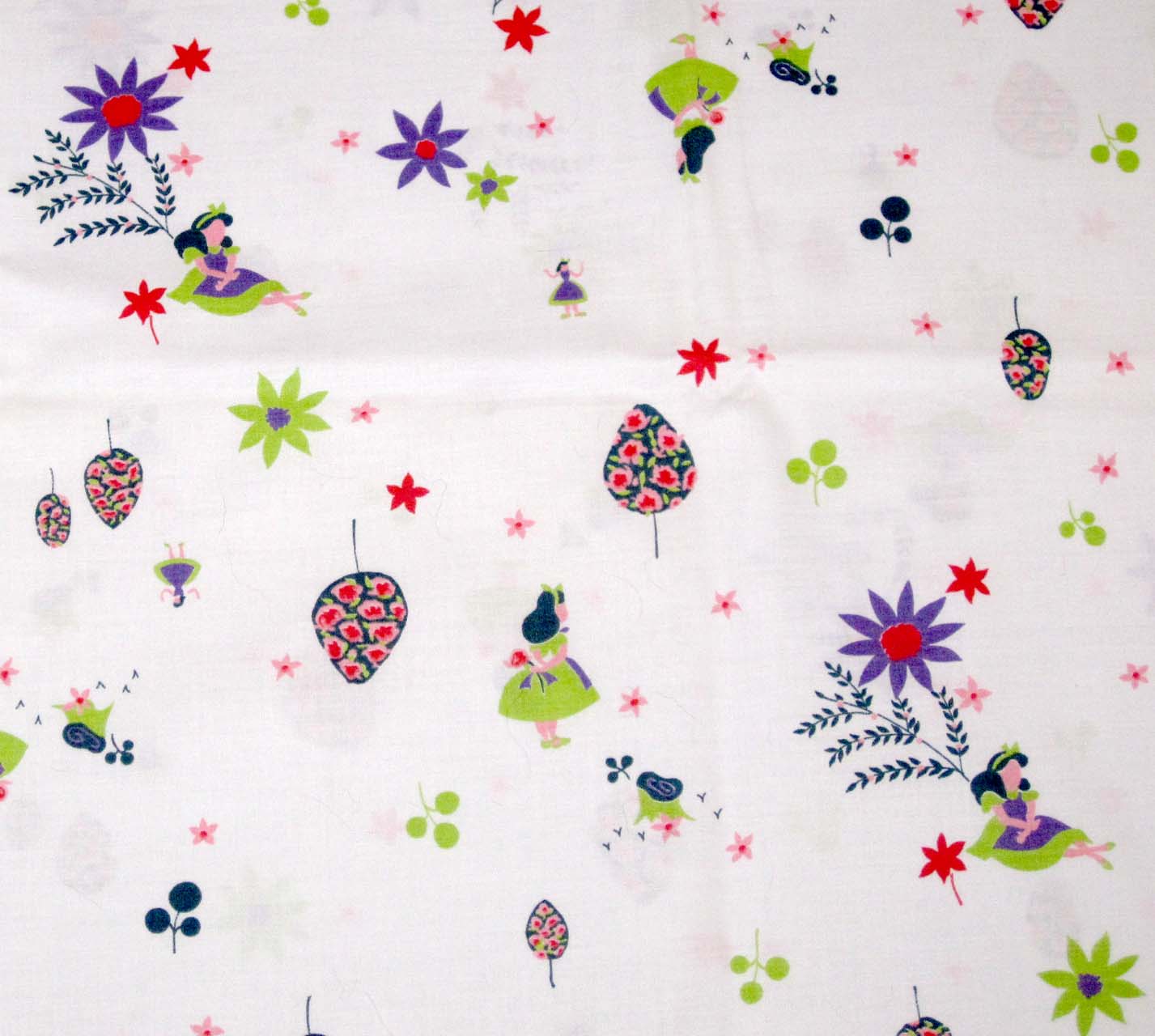 While this example does still have a selvedge, it just lists the company name and the Disney copyright.

Ok, so yesterday I said I assumed this fabric was available in store.  It was.  And this is a piece of it in blue.  I've not yet found a piece in pink.  I really like the mushroom background pattern.  All of the characters are a little crudely rendered, but what do you expect for cotton fabric from so long ago?  No selvedge on this piece, so I don't know what, if anything, this pattern was called other than Alice in Wonderland. 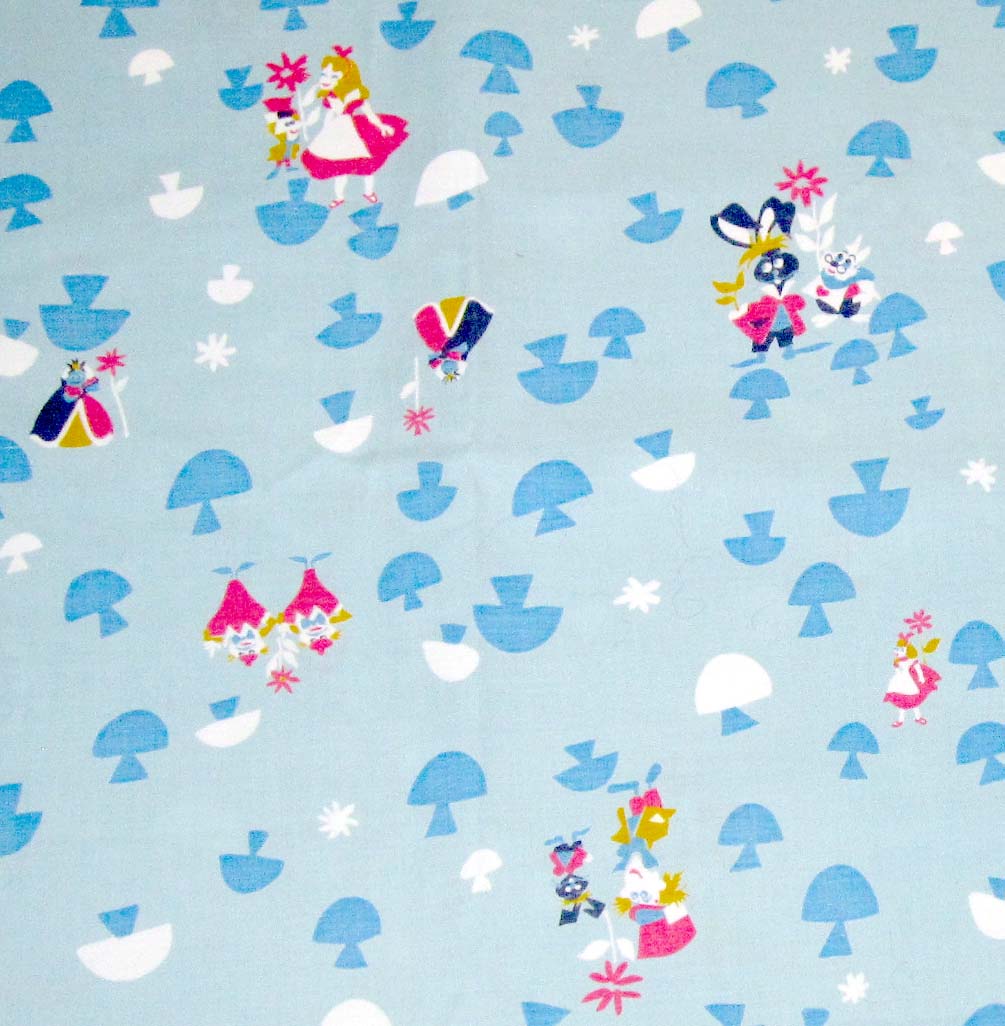 As luck would have it, I also have a homemade item using this fabric - a doll's apron or pinafore.  I love finding stuff like this. 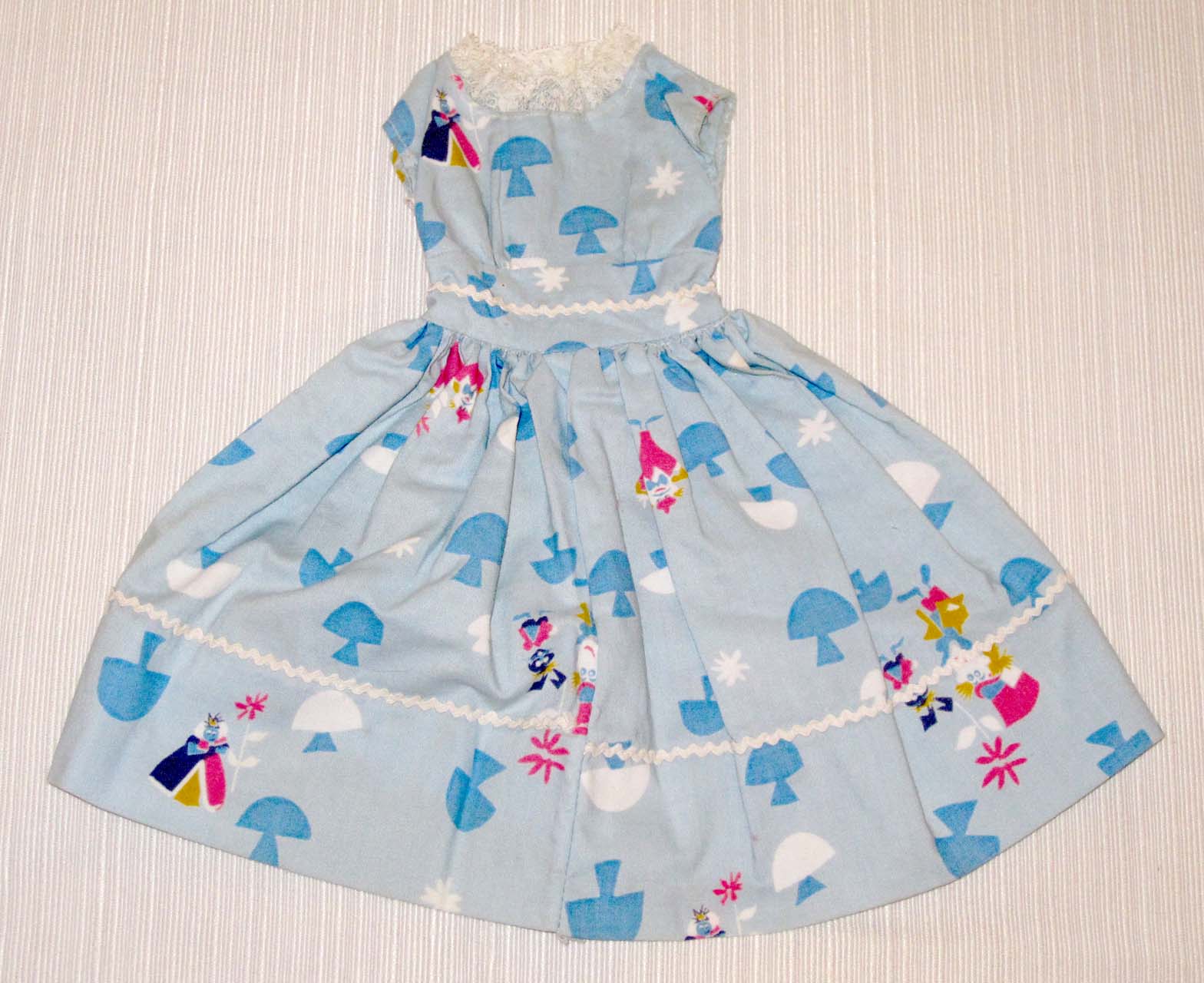 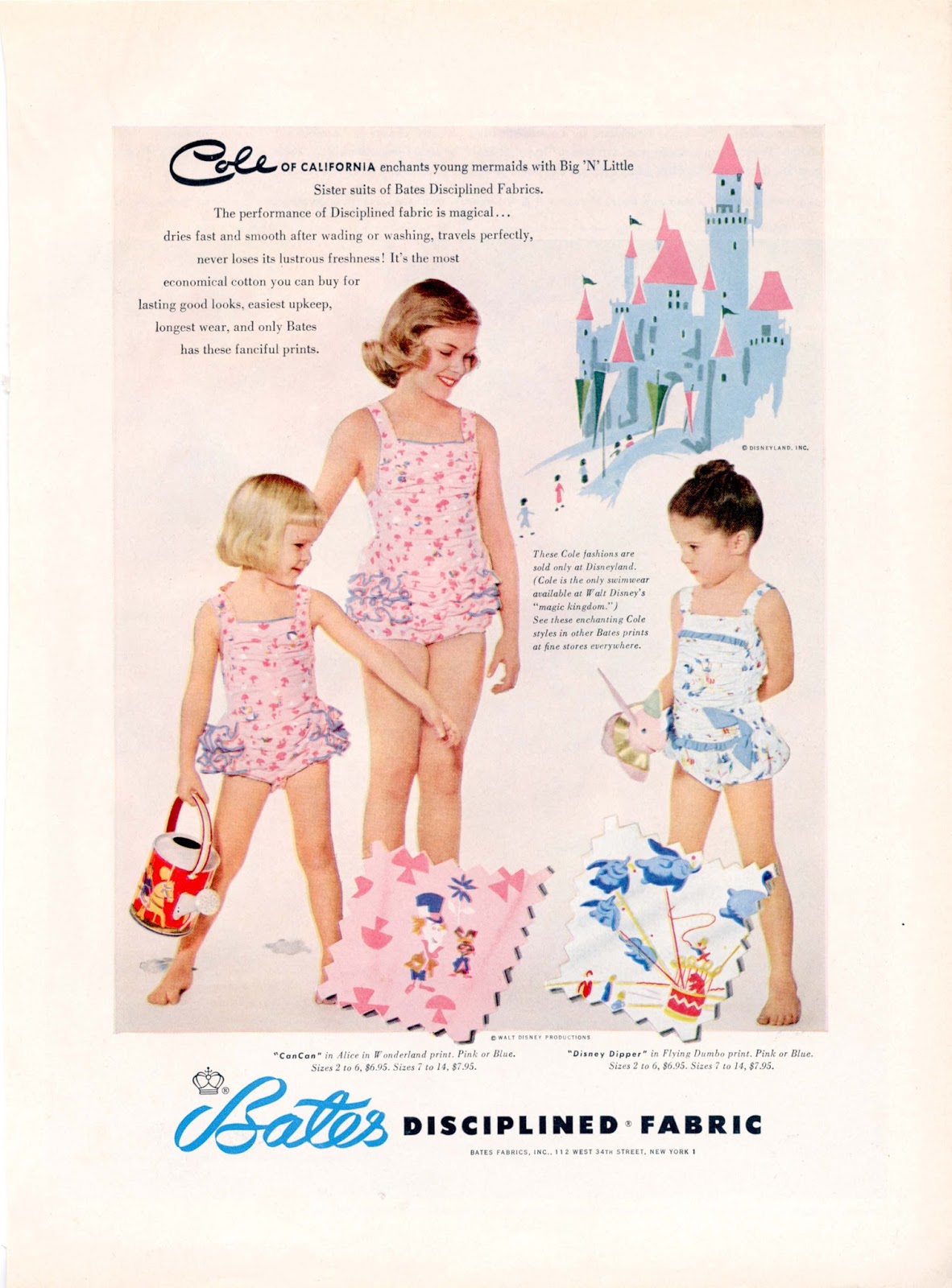 The Alice in Wonderland print was available in both blue and pink, and although the Can Can style swim suit was only sold at Disneyland by Cole of California, the fabric was available in fabric stores everywhere.  Or so I assume.
Posted by Matt at 12:00 AM 0 comments

Something new for me, some sheet music from Finland!  Way cool. 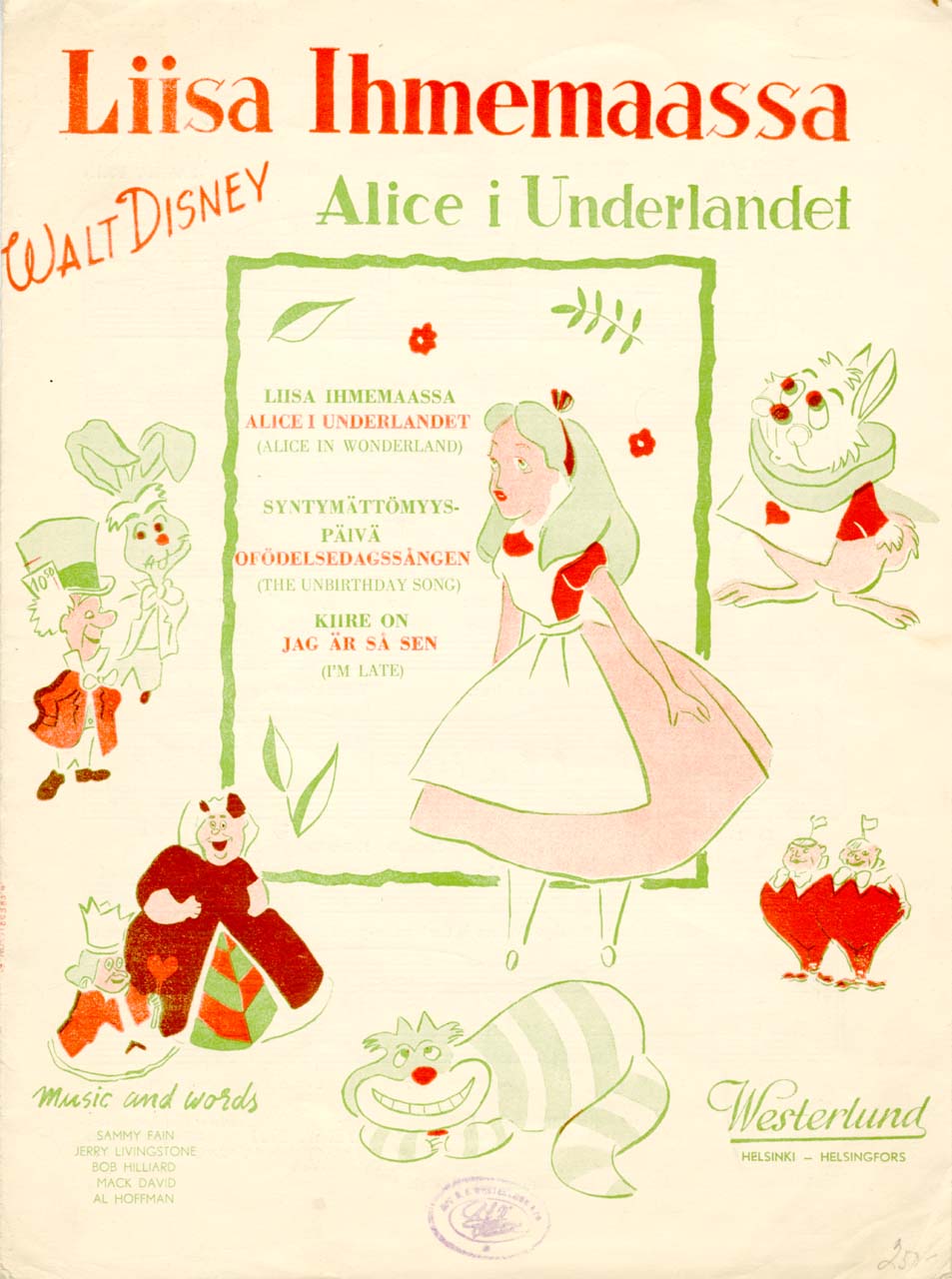 Interesting that the title is listed in both Finnish (red) and Swedish (green).  Really bizarre color scheme on this, red green & white, everyone looks a little possessed.  Interior has music and lyrics for three songs in two languages.  Pretty damn cool and the only one I've ever seen.
Posted by Matt at 12:00 AM 0 comments

Last in the series (that I am aware of) is this of Alice, with the bluebird of happiness apparently. 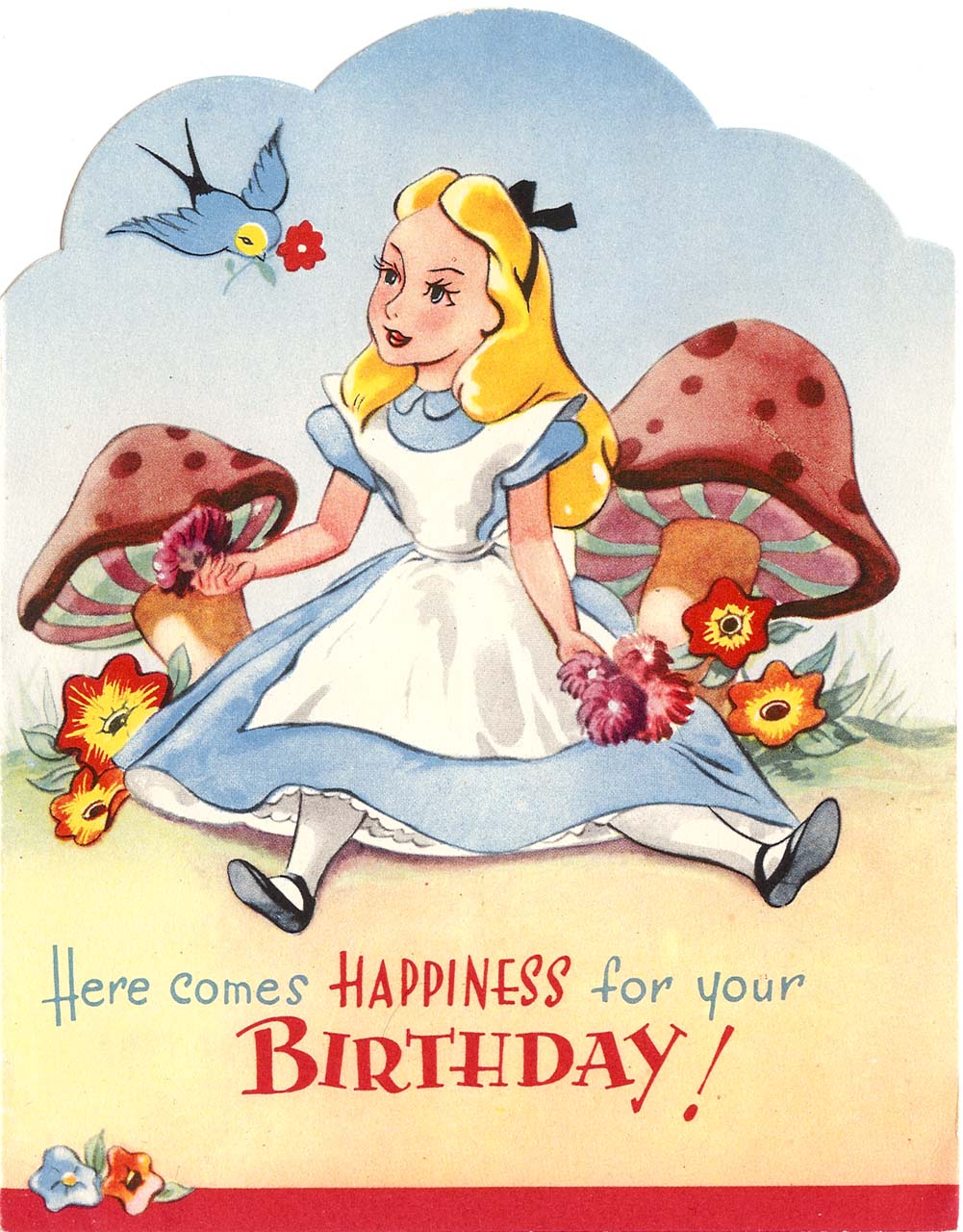 Again interior sentiment not really saying much, and certainly not themed to the Alice-ness of the card. 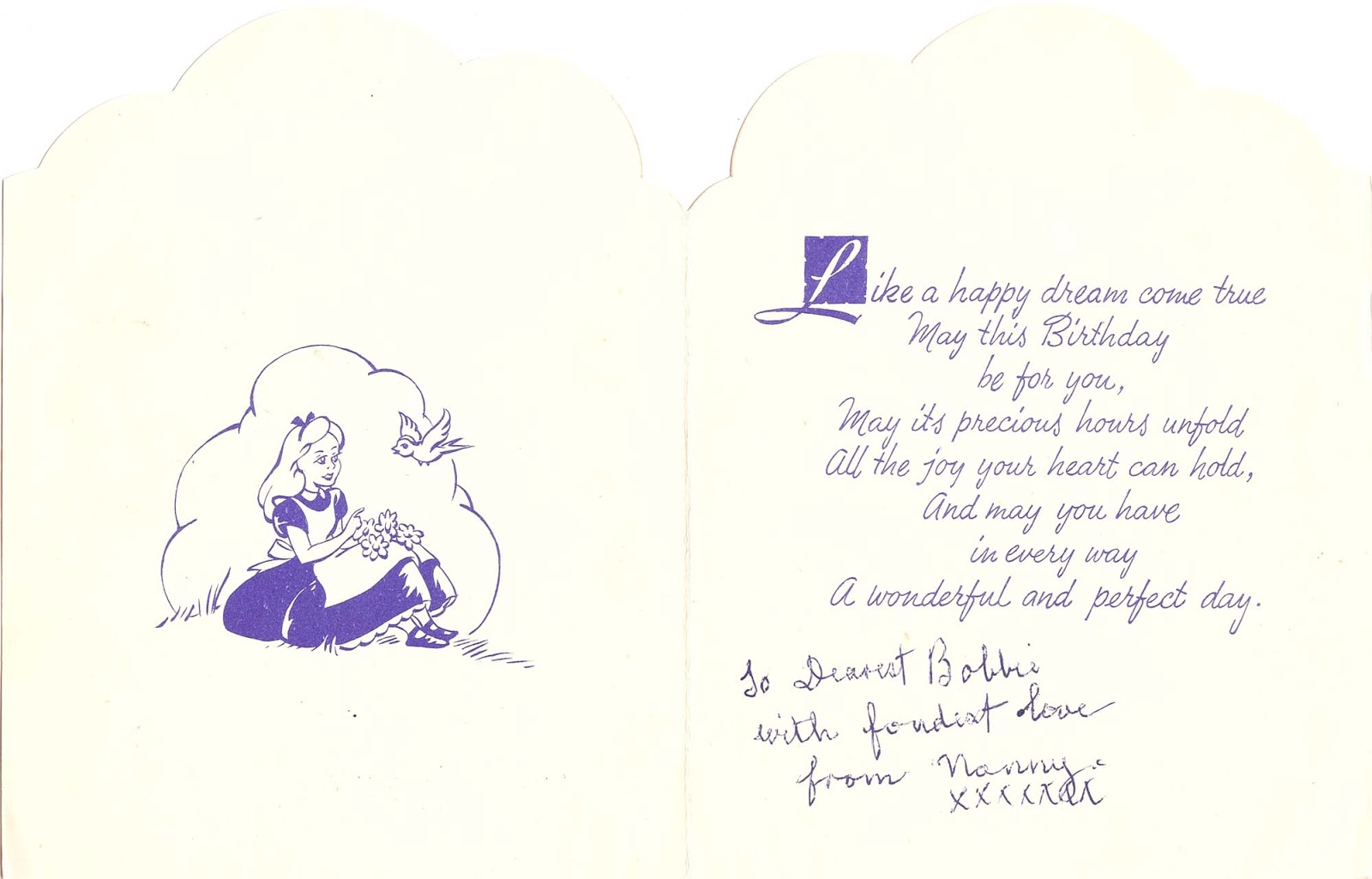 Nanny must have gotten a deal on these cards, and only known one heartfelt phrase for her presumed young charges - this time the recipient is Bobbie.  Twins perhaps?  Who can say, but I'm very glad to have them.
Posted by Matt at 12:00 AM 2 comments

Now here's something you don't see everyday, a birthday card with Dinah. 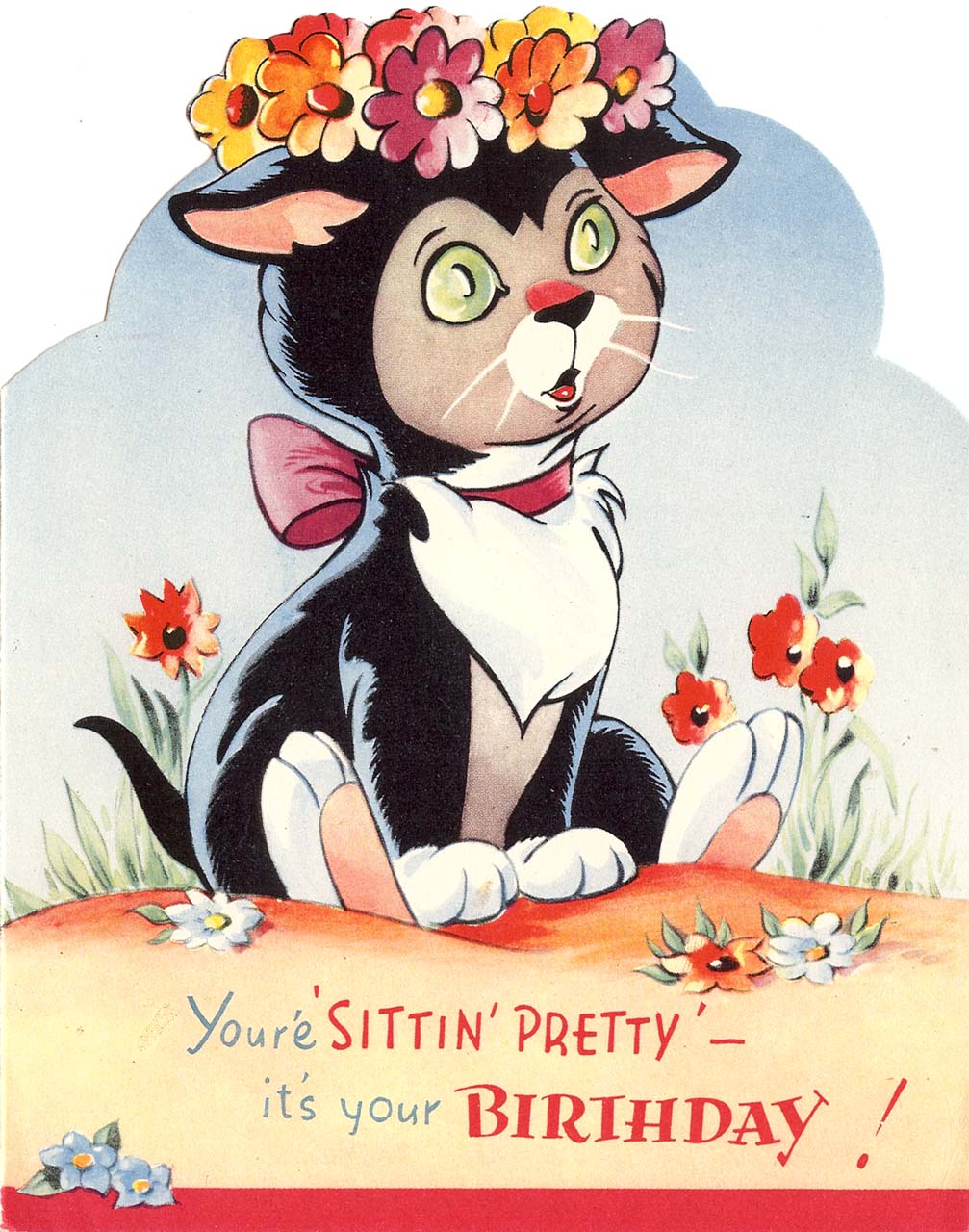 And it is even our friend Figaro as Dinah as we've discussed many times in the past. 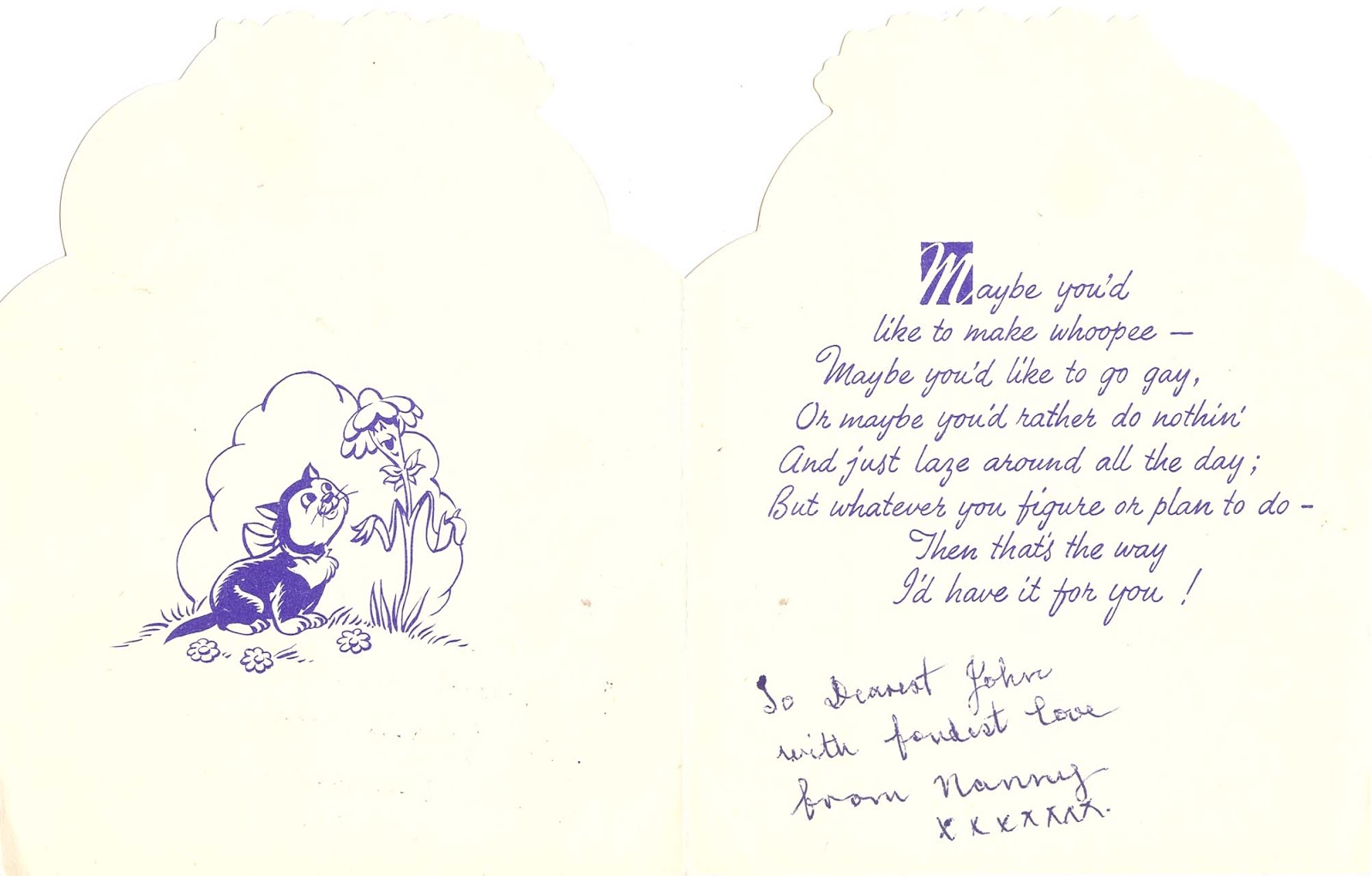 Interior sentiment is similar to the others.  And this card was given by Nanny to John, she must really have liked him as she gave him seven kisses!
Posted by Matt at 12:00 AM 1 comments

Since I have several of these Valentine's birthday cards, seems the right time to do them all.  The second card in the series features the White Rabbit. 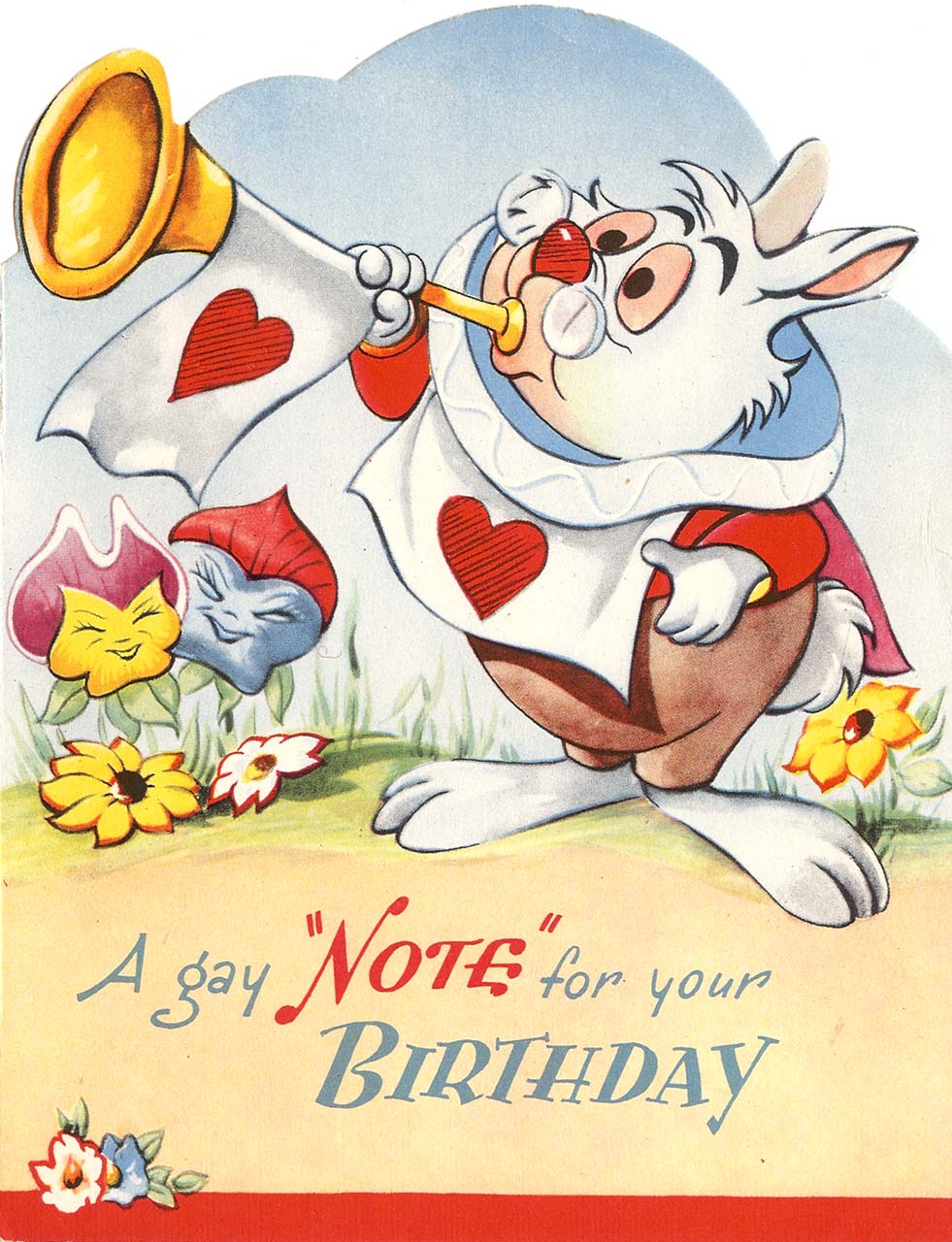 The greeting is 'A gay "Note" for your birthday', odd that they didn't succumb to the 'belated' temptation that seemingly every other greeting card company did.  Refreshing, but odd. 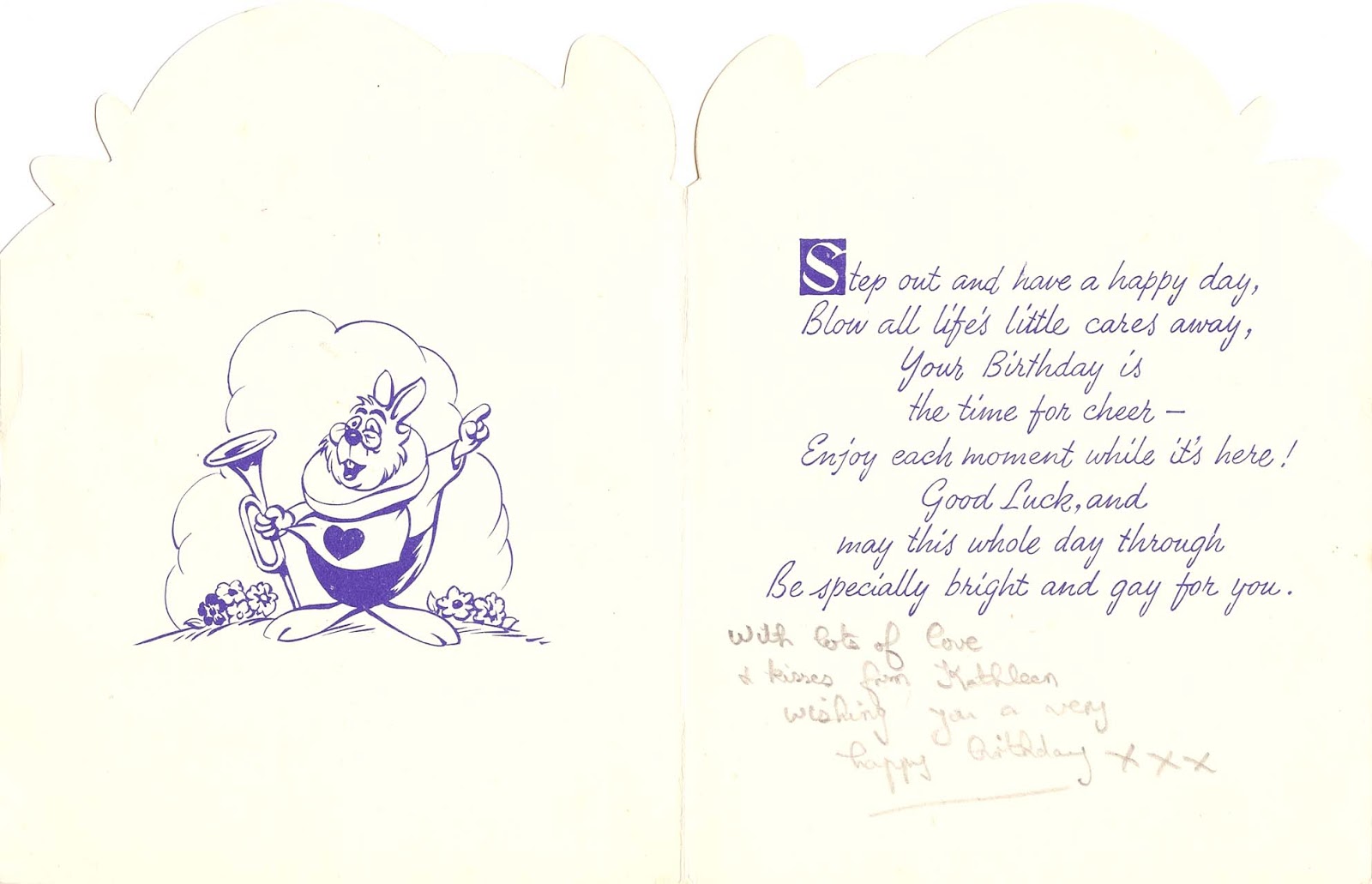 Interior message is again lengthy and not particularly themed to the rest of the card, except for the repetition of the 'gay' sentiment.  For those of you under the age of 30, gay is an old fashioned way of saying lighthearted, carefree, fun, merry etc.  Think Flintstones theme song.  Oh, and the Flintstones is an old cartoon about a stone age family - again for the under 30 crowd.  Hmm...maybe ever for the under 40 crowd.  Damn I'm getting old...
Posted by Matt at 12:00 AM 0 comments

The DFC show was a rousing success!  Thanks to everyone who dropped by to say hi!  My only score at the show was this English birthday card by Valentine's Greeting Cards, featuring the King of Hearts. 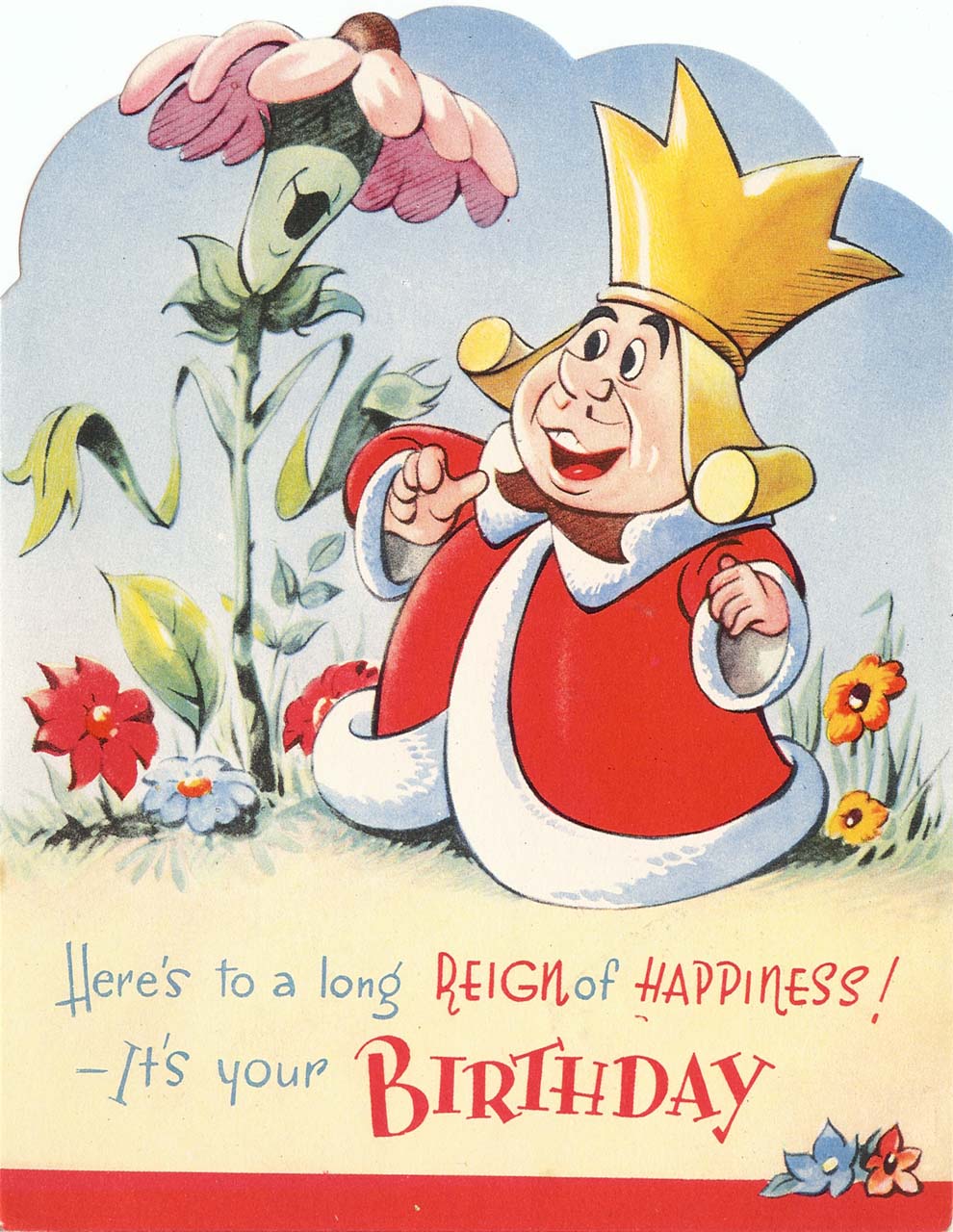 My quest for this card has spanned almost an entire year.  I first became aware of it after last year's D23 show - which I did not attend.  A friend sent me a camera phone shot of it, but it didn't come through until after the show was over. 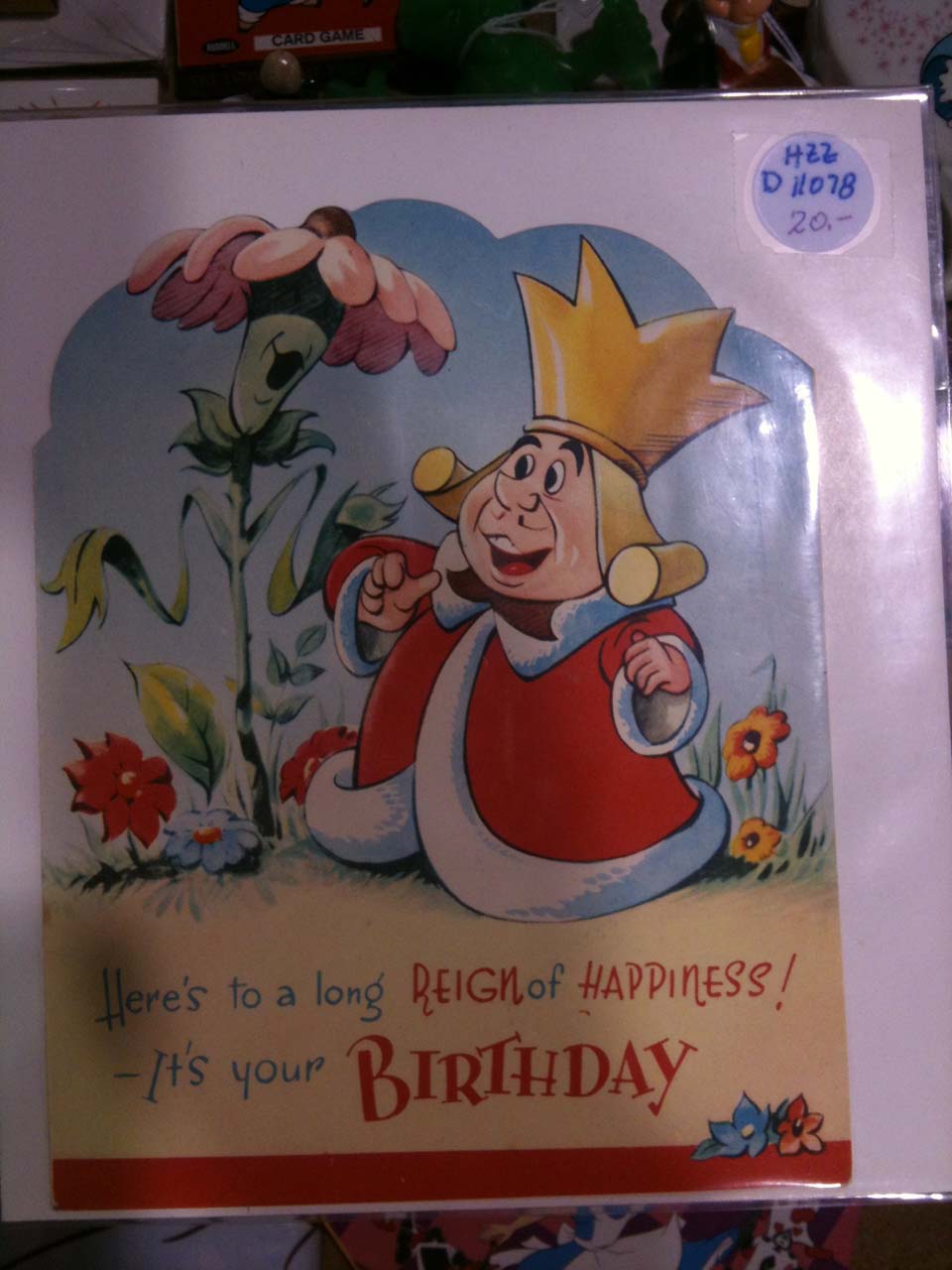 Yikes!  Never seen this before!  I must have it!  Then followed a series of inquiries by several individuals trying to track down both the vendors and the card.  I did finally discover the identity of the vendor, and I met them at the Dayton show.  But alas, was told the card had sold :-(  Then at the DFC show this summer, one of the individuals who had tried to track it down told me that the card was still available and that there had been some sort of miscommunication!  Hooray!  And it now happily resides with its brethren in the Tulgey Wood. 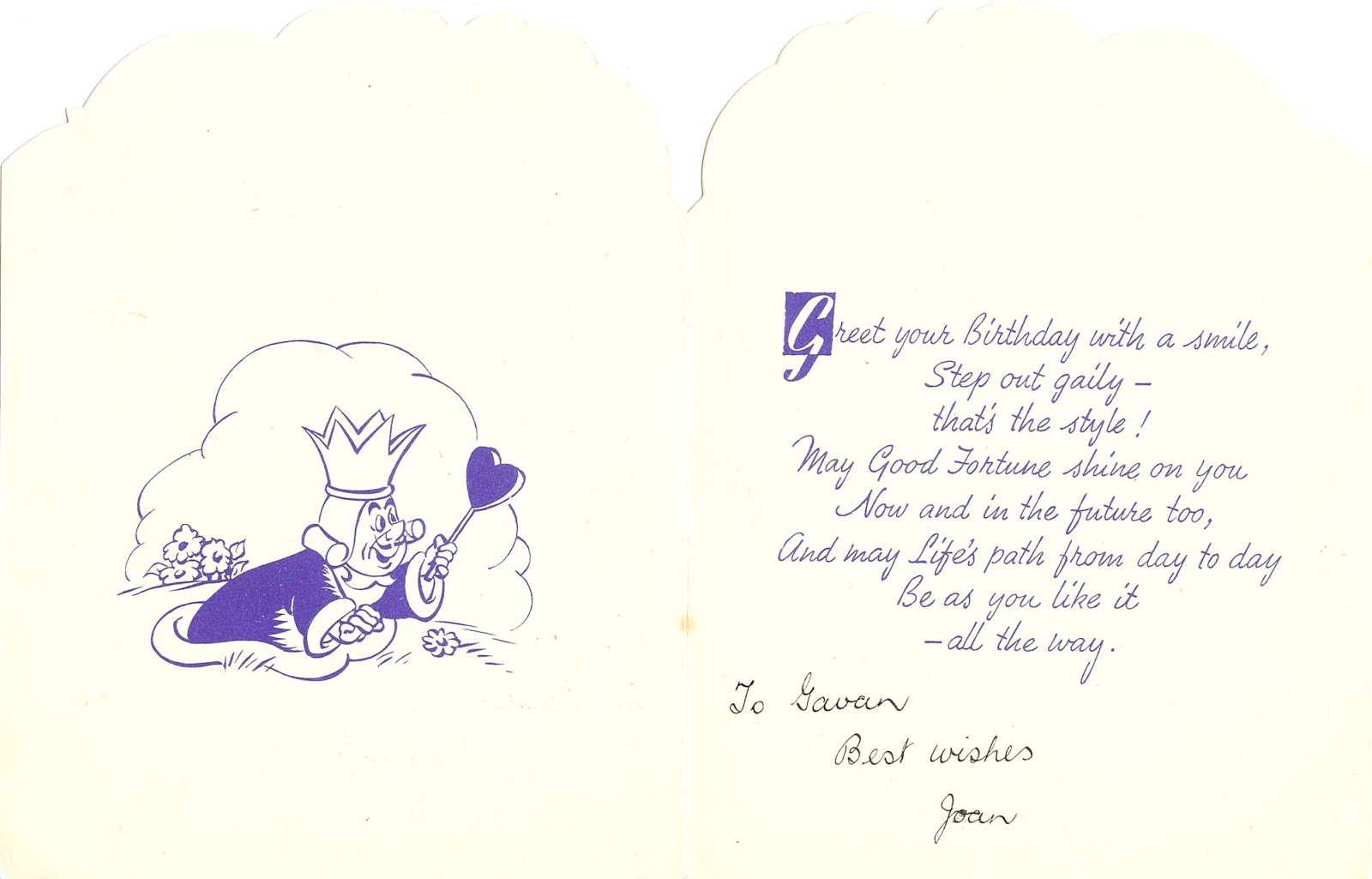 The interior sports a fairly lengthy verse about living life well...with no reference to the King or Alice whatsoever.  But I will hand it to Joan, a nice obscure card to her friend Gavan is never wrong in my book. 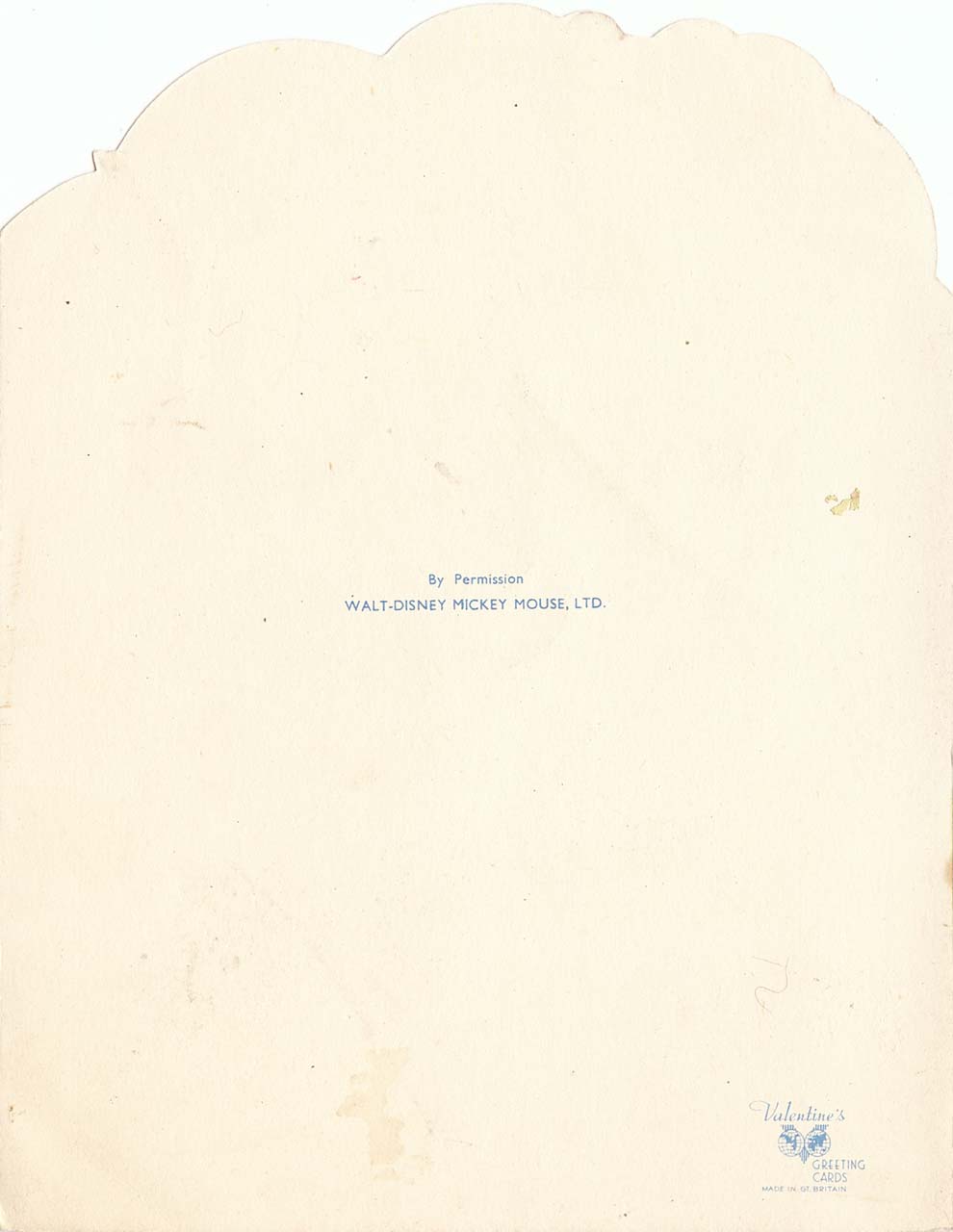