What may at first resemble a Big Golden Book is in fact something altogether different. This is the Alice book from the Grand Album Hachette series, shown here with the dust jacket, of which I have only seen one. 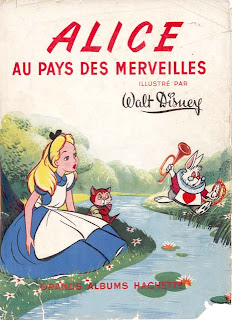 Generally the book is found without the jacket, but the cover has essentially the same art, albeit more colorful. Note that this is the same cover art as the BGB from Spain seen here. 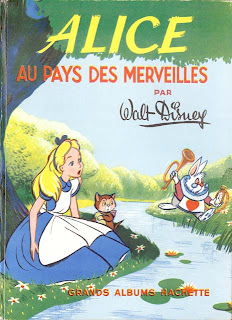 This book is listed in the Hachette Christmas supplement seen in this post. This book lists Belgium as its origin, and I will admit that I've gotten most of my various copies of this book over the years from Belgium. But I have to imagine that it was also available in France.

Another odd thing about this book: there are two distinct sizes for it. In general it is about the size of a BGB (approximately 9.25 x 12.5 inches), but there are copies out there that are about 1/4" smaller in both width and height. All other details about the book are the same including the printing information. Could it be that these different sizes are specific to the country in which they were sold? Weird.

What's especially cool about this book is that the interior art is totally different, and very colorful, although the individual renderings can be a little odd at times, for instance... 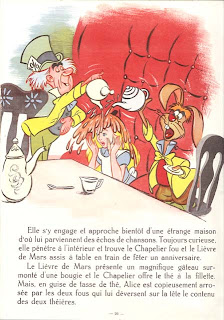 You can get a feel of the pastel quality of the art from this image of Alice falling down the rabbit hole. It is a fairly standard image, but the rendering is unique. 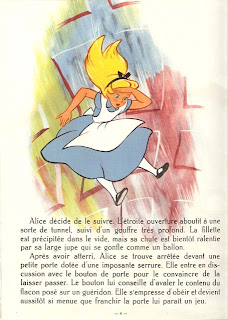 This is a new discovery for me, an edition of the Big Golden Book from Spain! This is from the Coleccion Galas Infantiles - which loosely translates to Child Gala Collection. 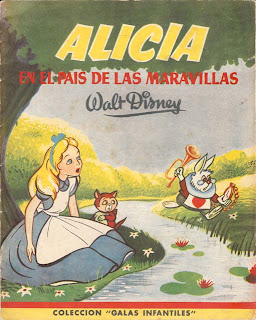 There are several differences in this book from most of the other editions of the BGB. First, it is soft cover rather than hard cover. Next, it is approximately half the size of the standard BGB. Third, it uses new and different cover art. And finally, the pages are not in correct story order. I originally thought that it might have been assembled incorrectly, but in fact not, as the pages are printed out of order.

Stay tuned, as we'll see this cover art again.
Posted by Matt at 12:01 AM 2 comments

Today's mystery figure is of the Queen of Hearts. 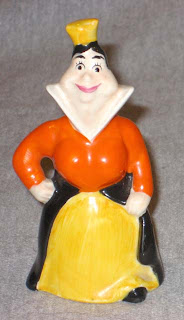 Again, no markings of any kind on this figure. It has a similar look to the Walrus from yesterday, although I suppose it could be a Weetman as I've never seen one, or it could be a knock off. As always, any information is greatly appreciated.
Posted by Matt at 12:01 AM 1 comments

Here's another figure from the 'I don't know what this is' section of the Tulgey Wood. 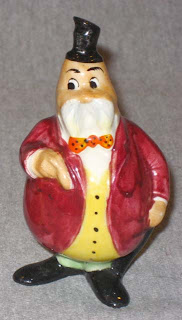 This Walrus is a complete mystery to me. At one time I wondered if he could be Wally Walrus, but now I don't think so. He is holding a cane and a cigar in his hands, just like the Walrus from Alice, and he doesn't appear to have visible tusks, again like the Walrus from Disney. There are no markings on this whatsoever. I don't think it is a Weetman figure either, because I have a Weetman Walrus with the original label, as shown here, so unless they made two different figures, it's not Weetman. Of course, I can't ignore the fact that it could be an unlicensed figure. I would greatly appreciate any information on this figure from anyone out there.

UPDATE:  I now have it on good authority that this is English, and by Weatherby or Falcon Ware, most likely from an abandoned series from 1958.  I'm awaiting my reference book, and when I have it in hand, I'll publish a full updated post.
Posted by Matt at 12:01 AM 2 comments

Happy Easter to all! It has been fairly traditional at Disneyland to use the White Rabbit and his mythical spouse to be the unofficial Easter mascots, along with the other Disney bunnies like Thumper and Brer Rabbit. They must be second cousins to the Easter Bunny.

As such, and oddly enough, they were immortalized in trading cards. This is card 28 of the Donruss Disneyland Tencennial trading card set from 1965, featuring Mr. and Mrs. Rabbit visiting the flower market hunting Easter eggs on Main Street, USA. 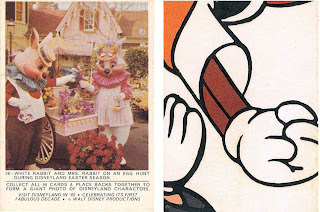 The above is the more common puzzle back, but there is also a blue back as seen below. 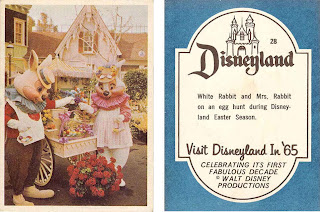 Next in the What Are They and Where Do They Come From series is this Chesire Cat, from the same unknown Spanish set as yesterday's King of Hearts figure. 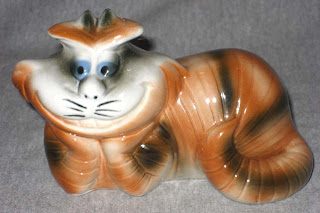 As with the King, his name is incised on the back, Gato de los Deseos, which seems to translate to 'cat of desires'...sounds pretty kinky to me.

If anyone out there has information on this set or manufacturer, I would love to hear from you!

UPDATE 2:  Reader Oli has sent this photo of a color variant in his collection.  Thanks Oli! 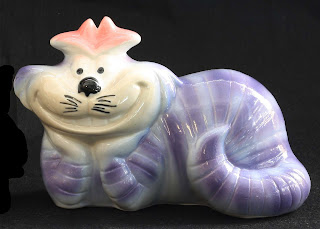 This post begins a series of unknown figures - at least to me. First up, this King of Hearts from Spain. 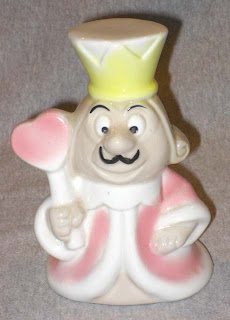 He's about 5 inches tall, and has his name incised on the back - Rey de Corazones.

When I first saw a picture of this I assumed it was a knock-off, but when I actually got one I discovered that it has a Disney copyright on the bottom. I am most curious to know more about this company and what all they produced. 'Productions' copyright puts this prior to 1986, but I'm guessing 1970s, probably coinciding with the '74 re-release. 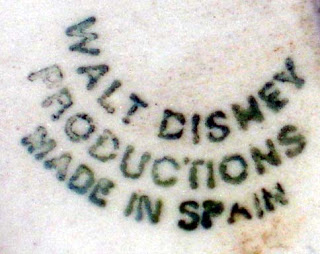