Number 11A is the Mad Tea Party. The caption says Animated Scenic, so I guess Alice, the Mad Hatter, the March Hare and the Dormouse would move about. 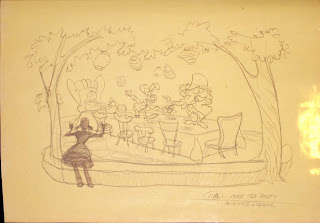 Number 11 is more of the Tulgey Wood with lots of paths and trees. Again, another concept from the funhouse, apparently it was supposed to be like a mirror room. 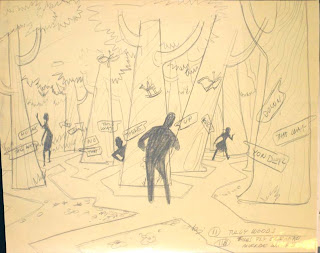 Number 10A is the Cheshire Cat, who of course disappears. 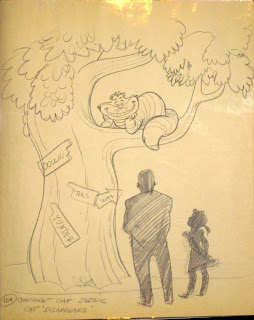 Number 10 is the Tulgey Wood, with the trees bearing the signs pointing this way and that. Looks to me like they were supposed to rotate. 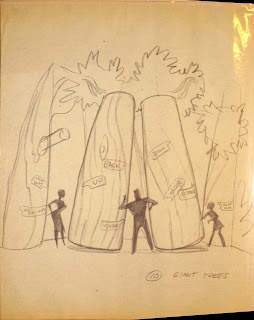 Number 9B is the Caterpillar. Apparently he was supposed to rise up like an accordion, and blow smoke rings. 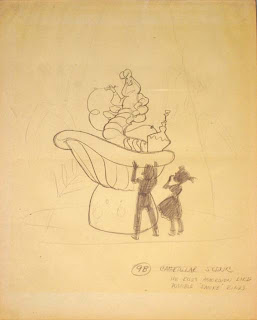 Number 9 is the Garden of Live Flowers. Presumably they'd sing. 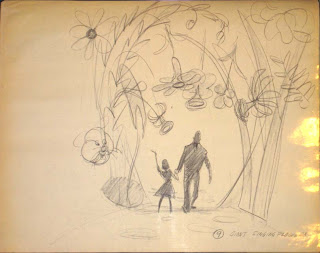 Number 7 is the White Rabbit's house. Another funhouse item, you would crawl through the house and come out the top and slide down the outside. 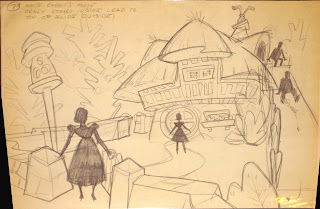 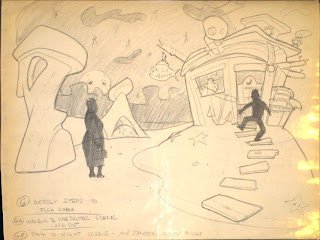 Number 5A is Alice's encounter with the Tweedles. The figures were supposed to spin about and bump into each other. 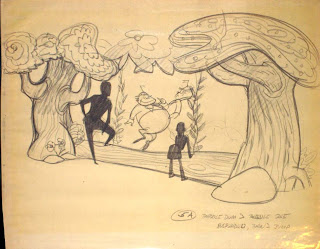 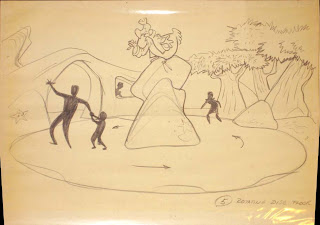 Number 4 is Over the Wave, featuring Alice in the bottle on the Sea of Tears. You can also see the Dodo floating by on the left. 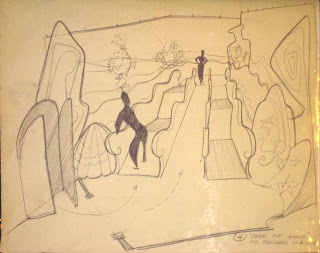 Bruce Bushman started his career at Disney in the animation department, as an art director and layout artist in the 1940s. By the mid 1950s he'd moved over to the WED division where he helped design this new concept Walt had called Disneyland.

This begins a series of concept pieces for the original Alice in Wonderland walkthrough attraction that was never built. These pieces are called brownlines, and not original drawings but blue-print-like copies, but brown (hence the name). I am missing a few, but you'll get the basic idea of what the attraction was supposed to be like. I also apologize in advance for some of these images, these are quite large (24x19) so I had to take photos rather than scan, so there is some glare on a few.

First up is the Forced Perspective Room. This would be just after Alice has landed at the bottom of the rabbit hole. 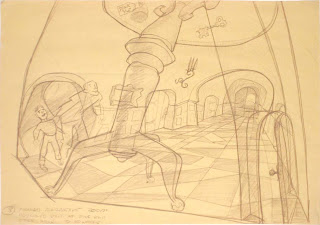 Notice the key on the top of the table. The text reads: "3 Forced perspective room concealed exit at far end other door to no where".

I'm off on my summer vacation! Woohoo! First week in LA, Disneyland Sunday and Tuesday at a minimum, then a week in Colorado. To kick off my vacation here is a very cool Bruce Bushman concept brownline, hand colored, of the Teacup attraction. 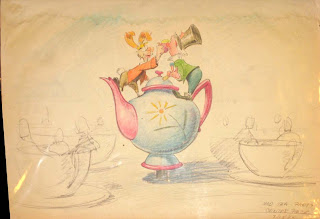 Interesting to see the date on this, 4 months before the park opened. Guess there was not enough time to alter the OTS carnival ride to include the centerpiece.

Later parks did include a centerpiece, like WDW and Disneyland Paris, but Disneyland's has remained the same.

Stay tuned for the next two weeks for the Alice Attraction that Never Was series.
Posted by Matt at 1:05 PM 5 comments

In honor of Disneyland's Alice in Wonderland attraction's 52nd anniversary, I present to you this full page newspaper ad from June 17th, 1958 (a few days early) featuring the new attractions unveiled, including Alice, the Columbia, and the Grand Canyon diorama. 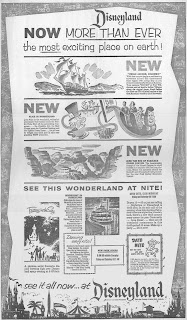 I like the minimalist art on this, and there are lots of little details around the edge. I especially like the silhouette art at the bottom and of course the Date Nite inset. 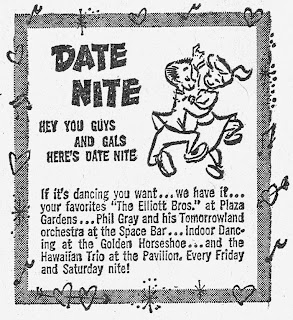 In honor of my upcoming visit to Disneyland, we have here a couple of vastly overexposed black and white photos of the Alice exterior from January 1959. 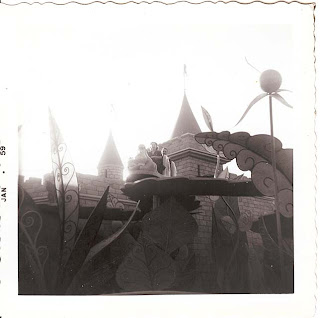 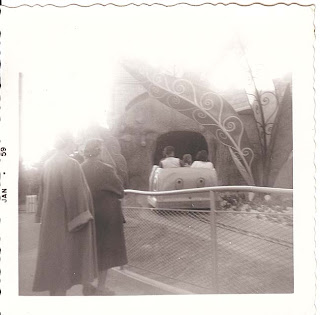 I'll be at Disneyland the week of June 21st, if anyone is going to be around let me know! Also, stay tuned during that week for a series of cool posts on the Alice attraction that never was. I'm busily scheduling posts as we speak.
Posted by Matt at 12:01 AM 1 comments 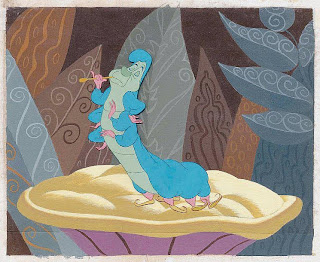 Some pretty fabulous Alice art is in this auction later this week. If anyone is looking for Father's Day gift ideas for me, I would not so no to lot 362.
Posted by Matt at 3:14 PM 2 comments

Boy was I excited to get this. This a set of original drawings for one of the Hudson car commercials I blogged about here. While these drawings are not from that specific commercial, they are clearly of the same style, so there must be at least one other commercial out there somewhere. 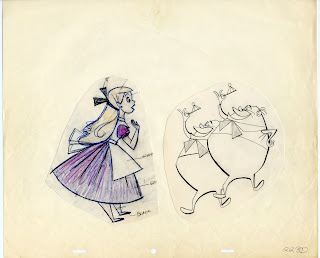 I acquired these from Howard Lowery's auction site, I highly recommend it.

UPDATE:  I've recently discovered that the artist on these was Tom Oreb.
Posted by Matt at 12:01 AM 2 comments

Imagine my surprise when I came across this newspaper comic ad for the exact same bread label promotion as the NBC one, this time not only with the fill-in picture included in the ad, but for yet another different brand of bread! 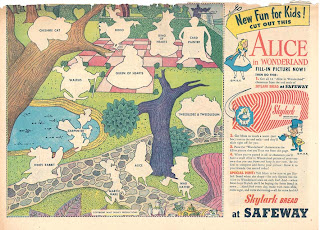 Skylark was apparently the Safeway store brand of bread. This now makes a total of three bakeries that carried this promotion that I am aware of. I wonder how many other regional bakeries participated? I'll probably never know for sure. 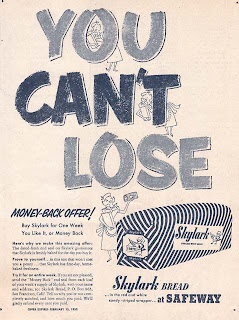 But most importantly, this ad has something that the previous ad does not: a comic strip on the back. Why is this important you may ask? Because comic strips are all dated.

The back contains the full Sunday strip for a Red Ryder comic strip. And it does indeed have a date. Sunday, March 2nd. That would place this ad in 1952. Wow.

That is VERY late for an Alice promotion. At least for a successful one. Perhaps this is why the labels are so hard to find? By spring of 1952 Alice was pretty much gone from the theaters, and was considered a "less than successful Disney release" (ahem). Any promotion occurring so late in the game was most likely doomed to failure.
Posted by Matt at 12:01 AM 0 comments

And here we have it, a completely filled in NBC Bread Fill-In Picture. Somebody back in the day had a lot of patience and a steady hand; some of those corners are really tight. 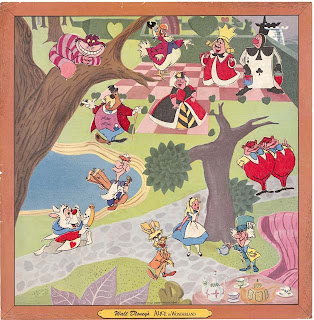 This is what one looks like not filled in. But the best part is on the back. 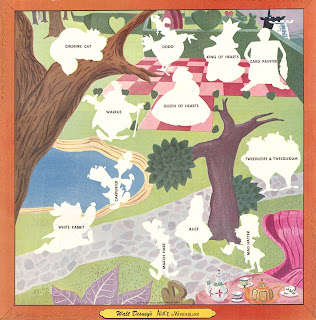 I have never read anything quite so horrifying as the ad copy on the back of this thing. It reads like some sort of gruesome fairy tale. "Hey kids, here's our anthropomorphic whole grain friend about to be crushed to death and baked in a commercial oven. Zingo!" 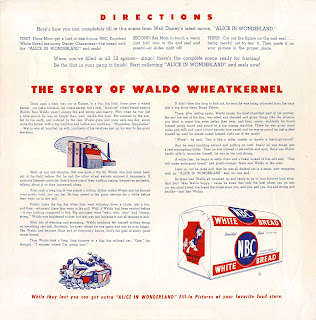 Just last week I discovered a variant of this fill-in picture, for the Schmidt's Blue Ribbon brand. Schmidt's is a regional bakery out of Baltimore, MD that is still in business today. In fact, according to their (very outdated) website, they are the largest independent bakery in the mid-Atlantic. I am particularly fond of their potato-based hamburger buns (yum!). 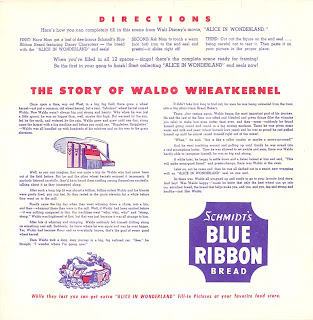 This item is available in the Wonderland Bazaar.
Posted by Matt at 12:01 AM 2 comments

The primary goal of any promotional campaign is to sell more stuff. When you are targeting children, what better place to advertise than in the Sunday comics?

This is an advertisement for the Alice series of end seals on NBC bread, as printed in the comics pages. I never knew that Nabisco also baked bread. When I first got this I was hoping there was a comic strip or something other than another ad on the back side of this, so I could date it. But alas, such was not the case, no date to be had.
Posted by Matt at 12:01 AM 0 comments