Chapter 2 appears in the issue dated July 28th, 1951, the date of the US premiere and the official anniversary of the film's release. 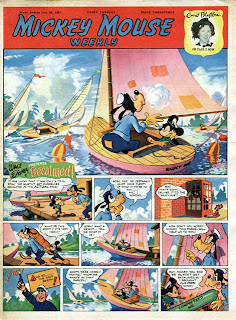 Second of the colouring competitions, this time featuring my favorite character, the Caterpillar! 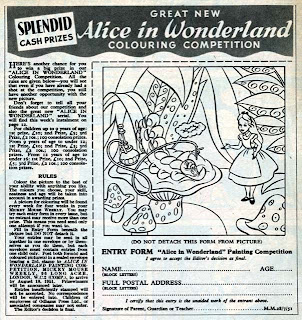 Chapter 2 finds Alice tumbling down the rabbit hole and chasing the White Rabbit through a small door.  Guess we'll meet the doorknob next time. 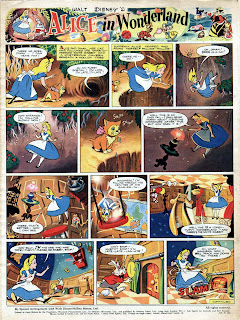 Again in this issue, beautiful painting not normally found in comic pages.  Wonder what happened to all this art?
Posted by Matt at 12:01 AM 4 comments

Although the Walt Disney Company celebrates the anniversary of the release of Alice in Wonderland on July 28th, it in fact had its world premiere on July 26th in London.  Here we have a photograph of Walt and Kathy at the world premiere, Kathy in her fanciest Alice costume and Walt looking smashing in his tux. 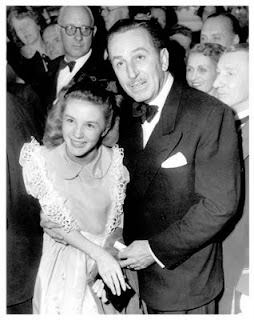 The premiere was at the Leicester Square Theatre in London, and they went all out for the displays as you can see in this photo.  Notice how the accompanying short is Beaver Valley; in the US it would be replaced by Nature's Half Acre.  If you look carefully, you'll see that several of the display pieces are enlargements of pages from the Big Golden Book. 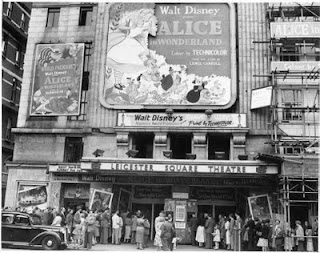 Man, what I wouldn't give to have this World Premiere poster, even if the art of the Cheshire Cat is a little scary. 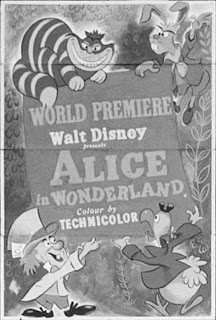 The Leicester Square Theatre is still in use today, although it is now known as the Odeon West End Cinema.

The wait is over, issue #584 begins our Alice in Wonderland serialization, and less than a week before the world premiere in London! 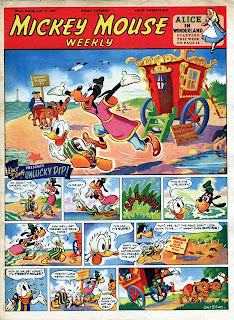 I love the little Alice inset on the front cover, I may have to steal this for something. 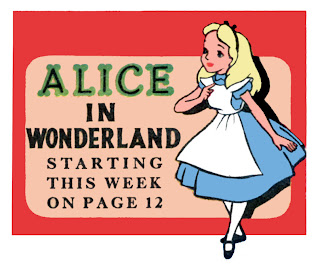 And as promised in previous issues, the first of the Alice in Wonderland painting competitions - now retitled colouring competition (those brits and their superfluous U's).  Splendid cash prizes indeed! 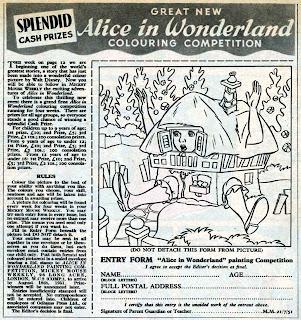 And last but not least, chapter one of the serialization, where Alice, Dinah, and her sister rest under a tree before Alice is captivated by a passing White Rabbit! 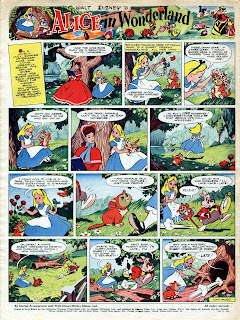 Major pointed out that I have been remiss in my postings. Some details on the art in the adaptation. The art is painted, by a gentleman named Ronald Neilson from England. To the best of my knowledge, the art was created for this publication, but I do know that the art was reprinted at one time in Turkey of all places. For details on this comic, or any other comic for that matter, you should visit the Disney Comics Database, listed in my sidebar. A vast resource maintained by a dedicated group of volunteers all over the world.
Posted by Matt at 12:01 AM 5 comments

Our final preview issue, cover sporting a teaser about the Alice news inside. 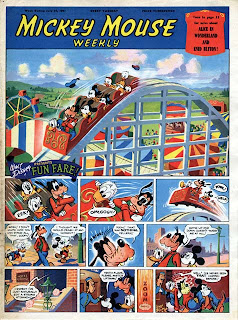 Three more stills, and a the shortest blurb yet about the film.  At least they gave Alice the page headline in these preview issues. 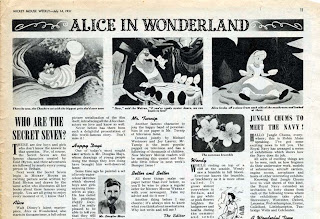 And still more Mr Turnip.  I may have to start an entirely new blog just so Major can get his turnip quota!
Posted by Matt at 12:01 AM 1 comments 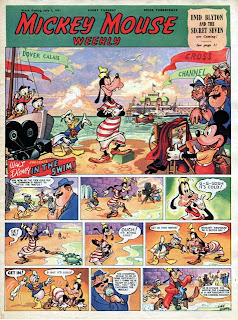 Three more stills from the film, and another reference to the £100 in prizes available in the painting competition. 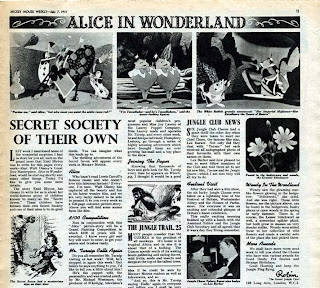 Today marks the 235th anniversary of our independence from Britain, but more importantly it also marks the 149th anniversary of the fateful boating trip during which the Rev. Charles Lutwidge Dodgson told the story of the little girl Alice following the White Rabbit into Wonderland to Alice Liddell and her sisters.  To commemorate this momentous anniversary I present to you the first publication of an Alice story by the Walt Disney company.

Surprise Package was published by Disney in 1944 as a Giant Golden Book.  It is a compilation of 12 stories that were all in various stages of development at the studio, of which Alice in Wonderland was one. 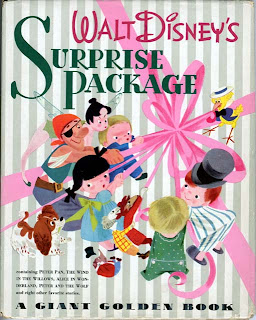 The book was originally issued with a dust jacket that is rarely found in decent condition. 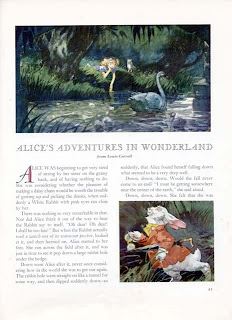 The coolest thing about this book though is the illustrations of the Alice story: they are all by David Hall!  I've posted about David Hall before, so I won't go into details here, but all the illustrations were created by Hall in 1939 as part of story development for a proposed Alice feature that got put on hold due to the war.  This was the first time any of these illustrations were released to the public, and they would not see the light of day again until the 1980s when Disney published a full edition of the original Carroll text profusely illustrated with David Hall art. 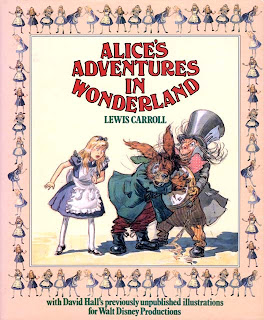 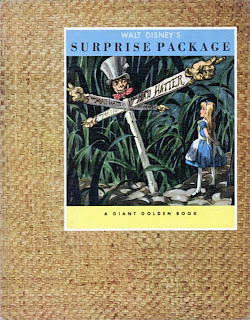 Surprise Package stayed in print for a number of years; I've seen it in Golden Book catalogs as late as 1953, although the story count by that time had been reduce to 9.
Posted by Matt at 12:01 AM 2 comments

Second and final of the known foreign editions of the Mad Tea Party comes from Australia.  As with the other Australian editions, this Mad Hatter was printed a couple of times.  This first printing you see here, 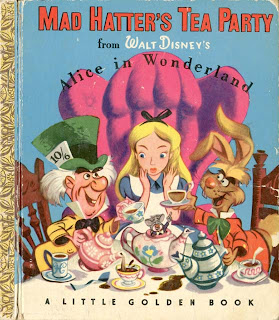 and this interesting edition with the Mickey Mouse Club imprint. 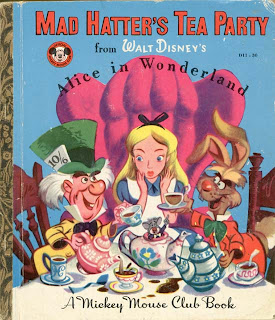 This dates this edition to at least 1955.  It is also interesting to note that the stock number changed on this edition.  First edition is D11, but the MMC edition is D11:30
Posted by Matt at 12:01 AM 0 comments

First of two known foreign editions of the Mad Tea Party, the French edition.  Essentially the same cover as the American, but rendered differently. 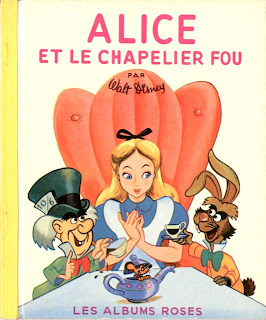 As with the other French editions of the Little Golden Books - or more properly Les Albums Roses - the various printings all look the same and have the same 1952 copyright, the only differences being the end papers 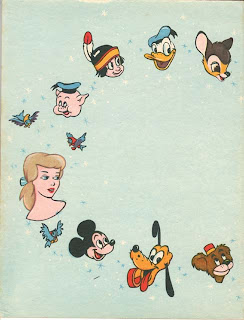 and the back cover. 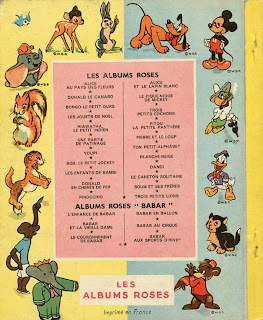 I'm finally getting around to posting the series on the last of the Little Golden Books - the Mad Hatter's Tea Party. 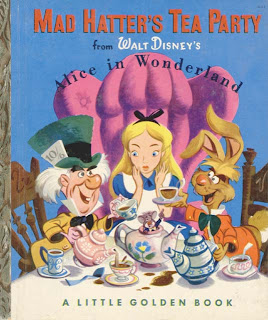 Based on what we saw in the Golden Catalog in this post, we know that this title was not only published after the other two, but announced after the other two.  As such, it comes as no surprise (at least to me) that there are so few foreign editions of this book as we'll see in the coming days.  Similarly to the Live Flowers book, there was only one printing of this title - at least in this country.  To date I have not been able to locate or even confirm the existence of a Goldencraft edition of this title.

The art is a little different in this title too.  According to the title page this book was adapted by Richard Kelsey and Don Griffith, and I don't think the art has the charm of the Dempster art in the White Rabbit title.
Posted by Matt at 12:01 AM 4 comments