It has been quite some time since I've posted here, and as the world has almost COMPLETELY changed it is not surprising.  But, during these crazy times I have still been on the lookout for new additions to the Tulgey Wood, and boy did I find a doozy.

This is the (already super rare) Goebel Dinah figure (DIS 084), but in test colors that are actually film correct!  That's right, the Goebel company actually create color samples of the Dinah figure in the correct colors, submitted them to Disney, and were rejected in favor of the incorrect black color.  One can only assume that at the time the color had not changed, or that the person in charge of approving these things did not know that the colors had changed and was relying on previously distributed color guides.  You can see my previous extensive post on the production version of this figure here. 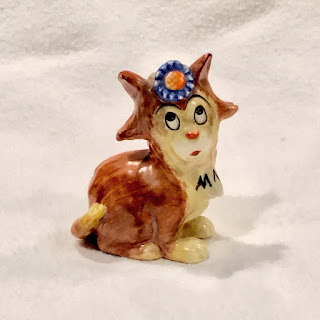 The key to understanding this piece is the "MM" painted on Dinah's chest.  MM is the abbreviation Goebel used for "Malmuster", which translates (loosely) to Color Sample. 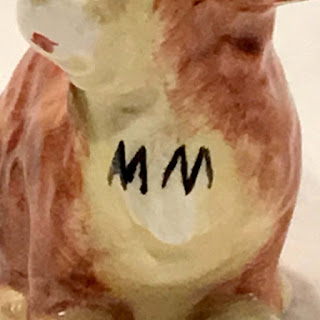 Note that this is a production ready piece, complete with standard Goebel markings on the underside of the figure. 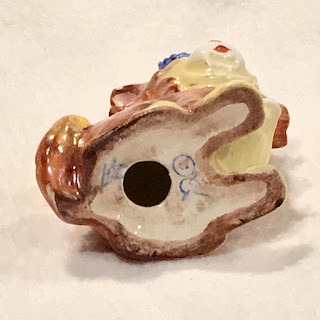 It is unclear exactly how many of these kinds of color samples were made, presumably not very many.  They do turn up from time to time, but this is the first I've seen from the Alice set, and perhaps even from the Disney set as a whole - at least of the vintage 206 figures.

While it is unclear exactly what the origin of this piece is, it was included in a lot of other Goebels, some of which had the archive tag (plombe) attached, which leads me to believe this was part of the massive Goebel archive sale that took place in Germany back in early 2012 - which was the source of the Final Four of my collection.

Many thanks go to my friend Alfred Stumböck for his invaluable assistance in figuring out exactly what this figure is.
Posted by Matt at 5:46 PM 0 comments