Today marks the 61st anniversary of the US premiere of Walt Disney's Alice in Wonderland.  As many of my readers surely know by now, the world premiere was actually 2 days earlier, July 26th, in London.  In honor of this very special day, and the fact that the English were 2 days ahead of us (and it is an English story after all), I present to you this issue of Illustrated from July 28th, 1951. 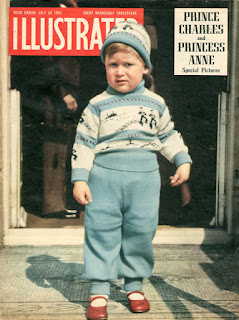 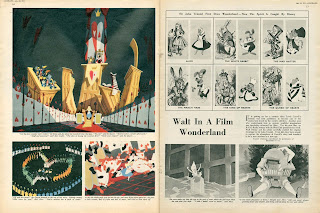 Inside features a fairly standard paragraph about Walt's Alice, but what is really nice are the illustrations comparing the Tenniel drawings with some great concept art from the studio.  I previously posted the still of Alice in my posting about the Alice Goebel figure (see, I still managed to mention Goebel figures) here.  I would love to find stills of the other concept art pictured here.
Posted by Matt at 1:57 PM 3 comments

Just because it is fun to see them all on one page, here is the full set. I promise I'll move on now...

Last but not least, the fourth figure from the Final Four, DIS 71 (I saved it for last because it is my favorite). 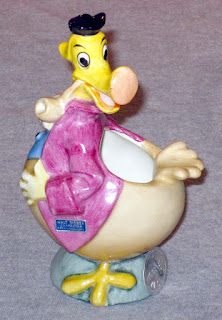 The parade of ashtrays continues with our friend the Dodo, this time modeled as a figural 'smoker' ashtray.  This is cool because the cigarette would rest on his tail, and the lit end would extend into the body of the Dodo, and the smoke would rise and come out of his pipe!  That is a genius design.  Too bad I don't smoke.  Goebel made several different 'smoker' ashtrays, but this is by far the coolest, and apparently the rarest too!
Posted by Matt at 12:00 AM 2 comments

Third in the Final Four is DIS 85.

This has got to be the most innocuous figure I've ever seen from Goebel, with the possible exception of the frog from the Bambi series.  I wrote a series of extensive posts on the question of 'is this Dinah' here and here, take a look at those for more details on why I believe this is indeed Dinah.  Again why two different Dinahs?

This photo illustrate a unique feature of the Final Four:  the Goebel Archive Tag.  What's that you may ask?  I'll tell you. 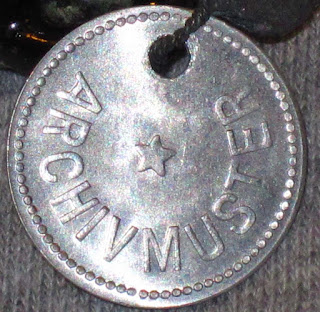 As some of you may recall, back in 2008 Goebel announced that they were closing and ceasing production.  They later sold off the Hummel division and the remainder of Goebel was purchased and both Hummel and Goebel continue to produce gift items, although independently.  But, as a result of the split and sale, the original factory, and the accompanying archive of figures, was sold off.  And these figures came from that sale. 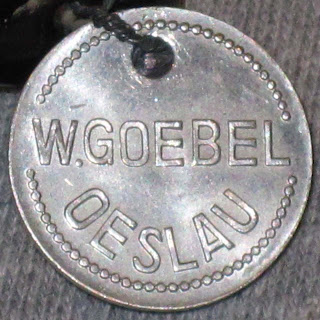 Each figure from the archive is identified with one of these small metal tags or plombe (feels like aluminum), and to my knowledge there was only one of each figure in the archive, and perhaps not every figure was represented.  Luckily for me the four I needed were indeed in the archive!  The word 'archivmuster' loosely translates to 'archive specimen' (or sample or model), essentially the file copy of the figure.  The reverse says 'W. Goebel Oeslau', which was the name of the company and its location at the time the figures were made.

Several very rare figures from the archive have surfaced on eBay in the past 5 months, and I'm sure there are more to come.  It may be that for some of the rarer figures, the archive example may be the only known example.
Posted by Matt at 12:00 AM 0 comments 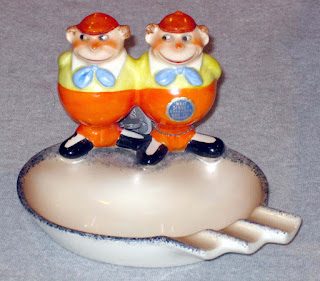 As with both DIS 106 and DIS 108, this is just the DIS 65 figure on the generic ashtray base.  While I understand that smoking was extremely prevalent at the time, I fail to see the need for so many different ashtrays, and especially this one.  With all the other ashtrays in this set, the character is a smoker, but no so with these two.  Nit picky to be sure, but just sayin'
Posted by Matt at 12:00 AM 1 comments

The first of the Final Four is DIS 108, the Dodo ashtray. 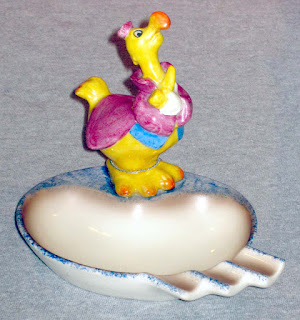 As with the previously posted DIS 106, this is merely the Dodo figure from DIS 66 applied to a standard ashtray base.  This same base was used on many different ashtrays in the Goebel line.  Gotta love the 1950s when everybody smoked, when a Disney-themed ashtray was a good idea.
Posted by Matt at 11:40 AM 2 comments

23 Years in the Making

Yesterday I received a package that completed a 23 year collecting odyssey.  I never in my wildest dreams imagined that I would one day be able to say this:  I have completed the Alice Wonderland set of Goebel figures! <insert fanfare music here>

It was a long road, that started when I found a copy of this Collector's Showcase magazine. 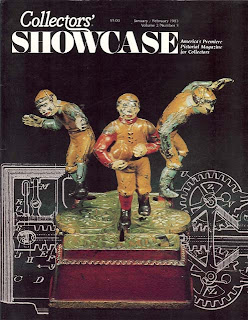 In the dark ages, before the World Wide Web, there were these constructions of paper issued on a periodic basis called 'magazines', and they covered a wide variety of topics.  This particular magazine was all about collecting, and this issue had a very interesting article. 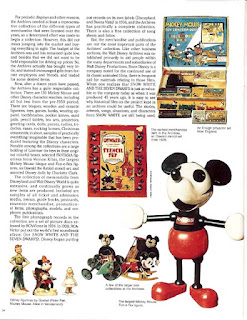 This article was all about the Walt Disney Studio archive, and talked about what kinds of things the archive had with a few illustrations, including this one 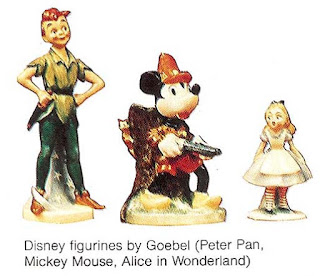 This was my first image of an Alice in Wonderland Goebel figure.  And the hunt was on.

I have previously posted a large article on the Goebel figures here, I encourage you to read it.  Stay tuned over the next few days as I reveal the Final Four.
Posted by Matt at 2:23 PM 0 comments

150th Anniversary of the Telling of Alice in Wonderland

Today is a special day (aside from the Independence Day holiday here in the US), it is the 150th anniversary of the first telling of the story of Alice's adventures by the Rev. Charles Lutwidge Dodgson to the young Alice Liddell and her sisters in Oxford, England.  Oh to be in Oxford today to relive this auspicious event!.
Posted by Matt at 1:37 PM 1 comments