Today I'm at the spring meeting of the Lewis Carroll society, this year being held in Boston. Come on down to the Harvard Yard if you are in town as the meetings are open to the public. And if you've a hankerin' for some vintage Disney Alice swag, stop by Hotel Tria room 333 between 9p-12a.
Posted by Matt at 8:35 AM 0 comments

Fresh back from Bonnie Scotland, and ready to resume semi-regular posting.  First up is something new - well, new to me, it is still old - a Japanese edition of the Big Golden Book. 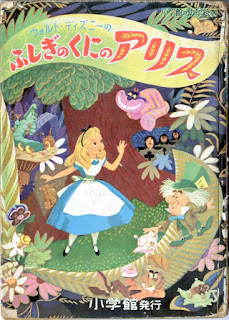 I did not know there were Japanese editions of the BGB, so this was a very pleasant surprise when it was brought to my attention while researching Disney Alice editions for an article I'm writing for the Lewis Carroll Society.  Thanks to Yoshi in Japan for all his generous assistance on the Japanese editions, and for providing me with this copy!  Now on to the book itself. 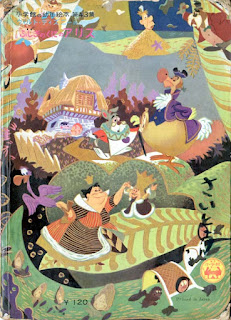 This particular edition is from 1957, which is the second edition published in Japan (the first being from 1953).  Covers and interiors are the same as the American edition with two exceptions. 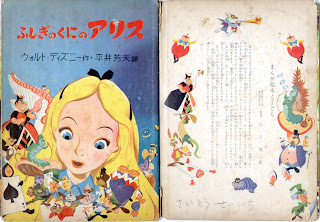 The inside front has different end papers and the first page has the same art as the previously posted Japanese book here, which is also the same as the cover on the Little Nipper Giant Storybook record that I have not yet posted. 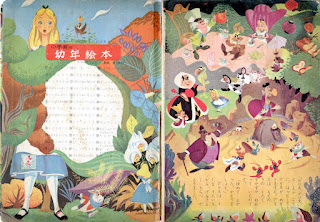 The inside back also sports art from the LNGS, this time from its back cover.  The final page is the same as the end papers on the American edition.  Price of this book was originally 120 yen, which translates to about 35 cents back in 1957.
Posted by Matt at 12:01 AM 0 comments