When I first saw this ad in the campaign book, for a set of what I assumed were 8x10 photographs, I wondered what it was about them that made them 'Color-Glos'. I mean, it is a black and white illustration, but the copy implies that they are full color, so I assumed they were just color stills, rare but not unheard of in 1951.

I imagine many theatre owners were caught as unaware as I was when I found my first one. If the campaign book had been in full color, the ad would have looked more like this

When I got my first one, I didn't put it together with the campaign book ad, I thought it was a homemade art project kind of thing, you know, someone found this old black and white still, and hand tinted it. My high school had a photography class that did exactly that. 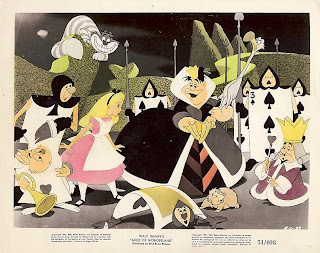 It wasn't until later when I found a group of them with a couple of duplicates that I made the connection. 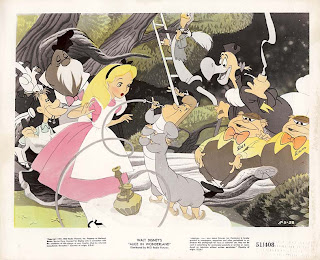 And again with the weird colors. Geez, can't anyone color Alice's dress blue?! 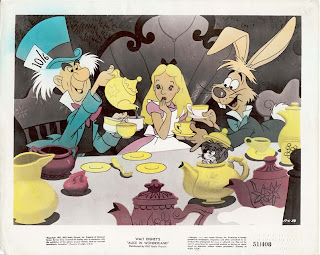 These are really neon, it is not a trick of the scanner, the colors really are this vivid. 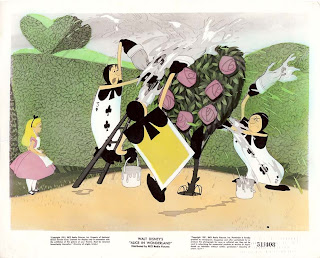 Also, there must be something about the process used to create these, they are extremely brittle, and they almost always turn up either torn or chipped. I've torn more than one accidentally as well. 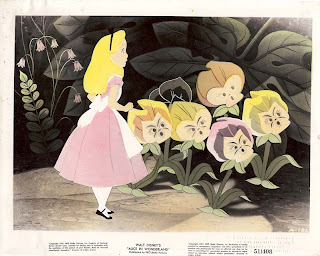 And these are really scarce, it took me 15 years to put together a complete set. 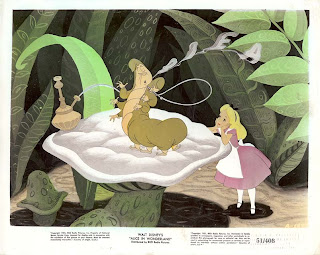 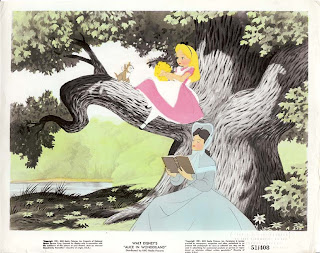 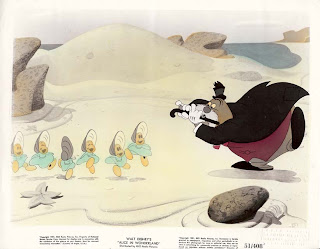 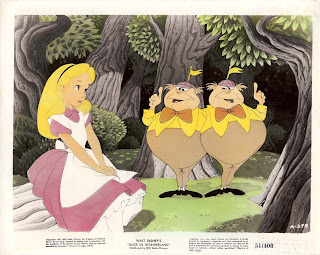 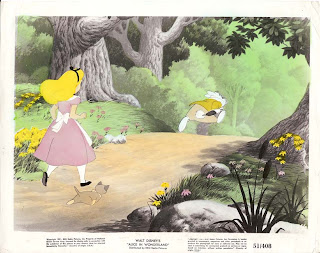 One more from the "wow, didn't know that existed!" category. This is an original release standee (who knew they made those back in 1951). 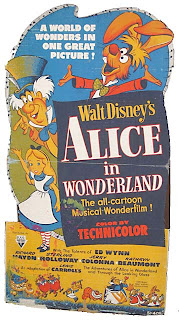 This particular example is in pretty good shape considering it is a piece of 60 year old cardboard. There are a few paint marks (some one apparently cleaned their paint brushes on it - the nerve!), and I was ecstatic to find it at all, and have never seen another.
Posted by Matt at 12:01 AM 0 comments

Getting near the end now. This is a window card, dimensions are 14"x22" - half the size of a half-sheet (quarter-sheet anyone?) and printed on the same heavier paper stock. This is another of those items that I thought would be way more common than it is, for the simple fact that these were also meant to be ordered in large numbers by theatre owners and distributed - this time to other local business. 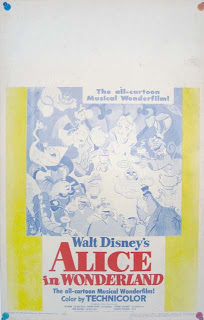 The idea is to print or write information specific to the local theatre at the top of the poster in the blank white area and have these scattered around town in windows to advertise the showing. As such, these were never meant to be returned to NSS after use, they were essentially single use, and I would have thought more people would have kept them. But that is certainly not the case, these are very very uncommon. When they are found, they are almost always trimmed or folded. It is not a very pretty poster, probably adding to its scarcity.
Posted by Matt at 12:01 AM 0 comments

This is a bit of repost, but seemed a good idea to put this with its brethren.
Of all the movie paper to be considered rare, this is the absolute last thing I would have predicted. This is the domestic herald from the 1951 RKO release. This is something that would have been ordered by a theatre owner and handed out in the weeks prior to the film being show at a specific theatre. 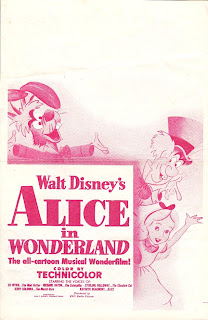 In all the years I've been collecting this is the only one I've ever seen. I've seen three six-sheets over the years, but just one herald. How weird is that?! Perhaps I just haven't been looking in the right places, but you'd think something like this would not be that hard to come by. They must have been printed by the thousands, and were made to be given away. It really is a nothing little thing, just a single sheet folded, one color printing (magenta on the front cover, blue on the inside). Cover art is the same as the A-style half-sheet (but reversed), 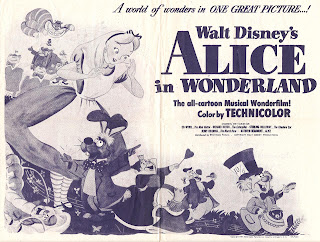 the inside art is the same as the B-style half-sheet and 24-sheet. 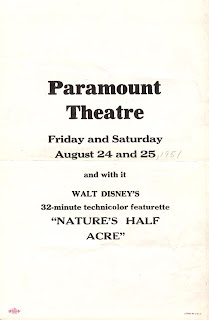 The back cover has the date and time for the Paramount Theatre, and advertises that Nature's Half Acre will accompany it.
Posted by Matt at 12:01 AM 1 comments

This is a bit of repost, but seemed a good idea to put this with its brethren.
All movie paper for Alice in Wonderland's initial release is by and large fairly rare, but here is something I never thought I'd see - I wondered if it even existed at all since it is not listed in the campaign book! 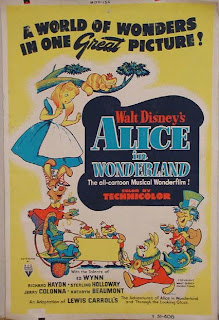 This is a 40x60, slightly smaller than a 3-sheet (41x81). The major difference is this is printed on a single sheet, and it is a heavier paper stock, more like lobby card or half-sheet stock. It does have the NSS number 51-408 printed in both the upper and lower margins. Odd that this particular size is only known by its dimensions, their is no 'name' for this poster size
Posted by Matt at 12:01 AM 0 comments 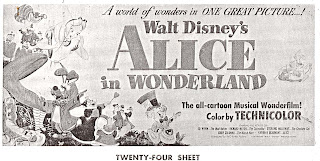 What I do have is this page from some unknown magazine that illustrates the Alice 24-sheet. The ad is for what appears to be a trade association for outdoor advertising companies called The Standard Group of Outdoor Advertising Companies. 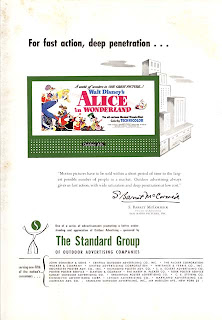 If this is really what the billboard looks like, would be great to have one...Alice would be something like 8 feet tall!

This is something I didn't think existed, a glass theater slide advertising Alice in Wonderland. I thought that these glass 'Magic Lantern' slides pretty much went the way of the Dodo in the 1940s, but here one is (thank you eBay!). I'm not even sure if these were distributed by NSS, but I'm operating under that assumption. This particular slide came out of the Rialto Theatre in Joliet, IL. 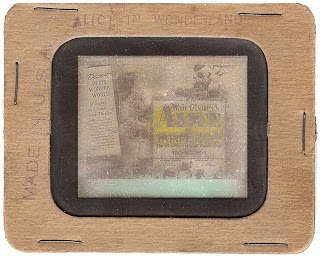 These were used by theaters to advertise coming attractions, local business, etc., between features and sometimes between reels. There were also sing-a-long slides from way back when the theater would only have a single projector and it took time for the projectionist to switch reels. At that time these kind of slides would be used to keep the audience entertained until the next reel was ready to show. 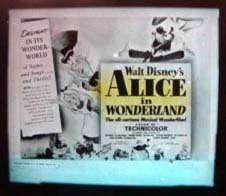 There is a pretty good article on these kinds of slide over at LAMP, if you are interested check it out.

UPDATE: I just noticed that the campaign book has a small note on the caption for the A-style half-sheet that says "Slide Same", which I guess means that the image is the same for this slide. No other mention of slides appears in the campaign book.
Posted by Matt at 12:01 AM 0 comments

Slightly out of order (took me a while to find it) is this B-style half sheet. 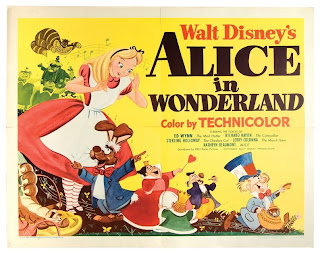 The first time I saw this I just about died. This is a banner, an incredibly rare movie poster that is not even listed in the campaign book. A movie poster dealer friend of mine found this for me back in 1993 I think, and since that time I've only ever seen one other example.

Banners are approximately 25"x82", so as wide as a three-sheet is tall. Made of the same heavier stock paper as half-sheets, they are rarely found unfolded since they are so long. And again with the funky color scheme, although in this case the printing is using a reduced 3-color process. It does carry the NSS number on each edge.
Posted by Matt at 12:01 AM 0 comments

As some of you may recall from last year, not only is this Independence Day here in the USA, but it is also the anniversary of the day when the Rev. Dodgson first told the story of Alice's Adventures in Wonderland to the Liddell girls in 1862. 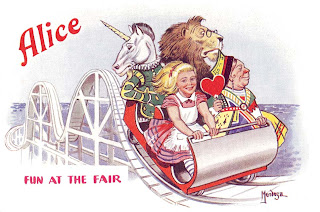 To commerate that occasion I present to you a rather odd piece of Disney Alice ephemera. This is a British postcard featuring Alice characters - drawn loosely in the style of Tenniel - by an artist named Mendoza. The card was made by Leslie Lester Ltd., of Hurstpierpoint, Sussex (say that three times fast). 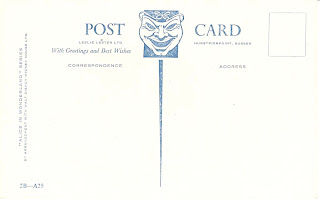 My guess is that either this was based on concept art or that Disney had tied up the rights to Alice somehow that necessitated the license as stated on the back.

This is one of an entire series of cards, I don't know how many there are in the series, but I have 12 different cards, all with the same license notice on the back. Most are more traditional scenes taken from the Tenniel illustrations, but a couple, like this one, are just plain weird.

I particularly like this card because it features characters that you rarely see renditions of - the Lion and the Unicorn.
Posted by Matt at 10:33 AM 3 comments

Last but not least, the Walrus as he is about to begin the feed. 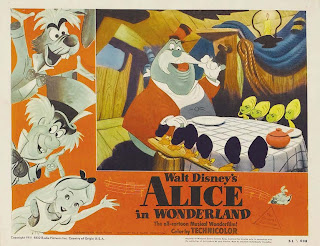