The ACMI Wonderland Exhibition tour is back on the road after a 2 1/2 year break due to COVID, and its next stop is Perth, Australia at the WA Museum Boola Bardip.  The lovely people at ACMI are again flying us down to help celebrate the opening and re-start of this amazing exhibition and its tour across the globe.  Any readers in Western Australia be sure to visit, and if you happen to be there December 15-18, introduce yourselves.  We'll be the two Americans wearing loud Alice-themed clothing ;-) 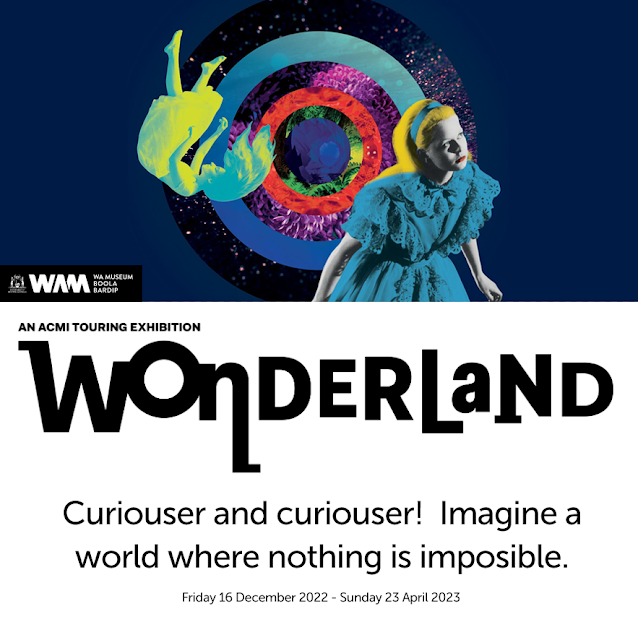 Two Down, Thirteen To Go!

Well, I *think* I've hit another milestone today with the book.  I'm not sure, but I'm fairly certain I've completed the first draft of another chapter, that on Toys, Games, and Puzzles.  Time will tell (meaning once we get the collection back on display) whether or not I missed something, but I feel pretty good about it.  I may yet make my 2026 deadline!  This was a big one, 28 sections, but hey, gotta be complete :-) 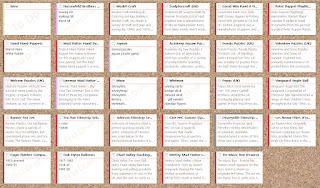 Banner Plastics made a variety of plastic toys for children, but specialized in tea sets and toy trucks.

The Banner Plastic Corporation was founded in 1944 in the Bronx, NY by two men, Emanuel M. Pressner and Bernard Schiller, although Bernard Schiller would not stay long with the company.  In 1950, the company moved from the Bronx to Patterson, New Jersey where they purchase a former aeronautical engineering plant.  During the mid-1950s, the company greatly expanded its product line, adding new metal toys to complement their line of plastic toys, including tea set, blocks, and trucks.  Into the 1960s they continued to expand their tea set line to additional kitchen toys and dishes, licensing such brands as Pyrex, Corning Ware, and others.  They continued to acquire other toy companies further expanding their lines with garden toys, military toys, and space toys.  But by 1965 the company had contracted to the point that their catalog contained only 50 items, that catalog would be their last as they filed for bankruptcy that year, and by 1967 had been purchased by Tal-Cap, a large toy conglomerate in Minnesota.

Banner held a Disney license for only two years, between 1955 and 1956.  An ad from an issue of Playthings from April 1955 shows the Alice in Wonderland tea set, but in the picture is a plate with an image of Thumper, so it is likely that they made a few different tea sets, but to date I've not seen any other than the Alice set.  Tomart also lists stacking blocks and a Davy Crockett covered wagon, neither of which I am familiar with.

Items are marked Banner Plastics Corp., Paterson, NJ, and depending on the year and the package, may have the company logo featuring two kids waving banners.

The Alice in Wonderland tea set was released in 1955 at the beginning of Banner's Disney license, the Playthings ad from April clearly shows it (well, not that clearly but I've highlighted it in the second image). 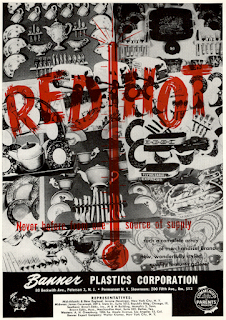 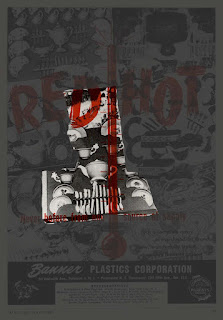 It is unclear why exactly they chose to do an Alice tea set, but there may have been renewed interest since the film had been aired on episode two of the Disneyland television show the previous November.  Also, the box in the collection features a label advertising the contest to win a trip to Disneyland, a promotion that ran the year prior to Disneyland's opening in July 1955.

No specific pricing for the Alice set has surfaced, but comparable sets of the era retailed at $3.98, which would be $40 in today's dollars.

The Banner tea set is amazingly cool.  For many years it was unclear exactly what was contained in this mythical toy, since only the tin pieces showed up the majority of the time.  However, the full tea set is actually pictured on the large tray so it was known what should have been included.  Eventually the plastic pieces surfaced, and later a full set in the original box was discovered.  A second set in the box was seen in the early 2000s and that is the set pictured here. 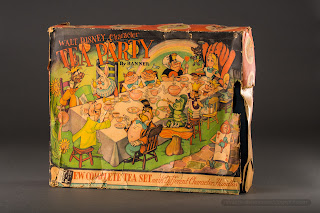 The tin pieces consist of four plates, four saucers, and the large tray.  The plastic pieces include four cups, four knives, four forks, four spoons, a creamer, a sugar bowl, a teapot, and a teapot stand - in loose sets the teapot stand is often missing.  Perhaps the coolest feature of the set is that all the handles are characters! 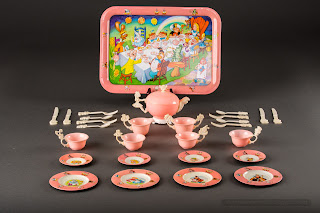 Every once in a while something turns up that just completely blows me away.  This is one such item.  The complete advertising and promotional kit for Trimfoot Shoe's Alice in Wonderland campaign. 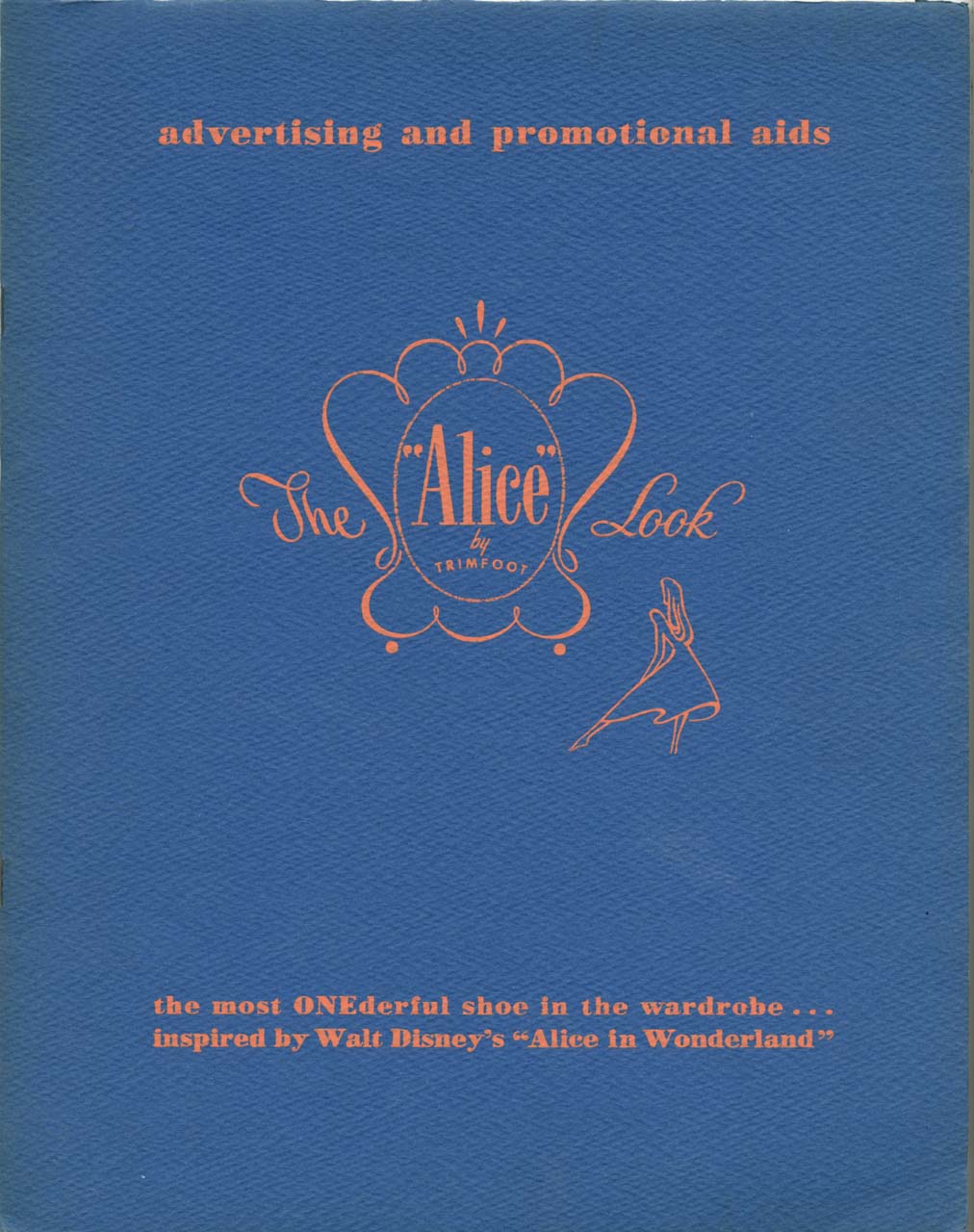 This thing is truly amazing, 16 pages plus cover and one insert of advertising gold for Trimfoot Shoes.  The campaign was called "The 'Alice' Look" and was centered around the marketing of a series of five different girls' shoes styles based on Alice. 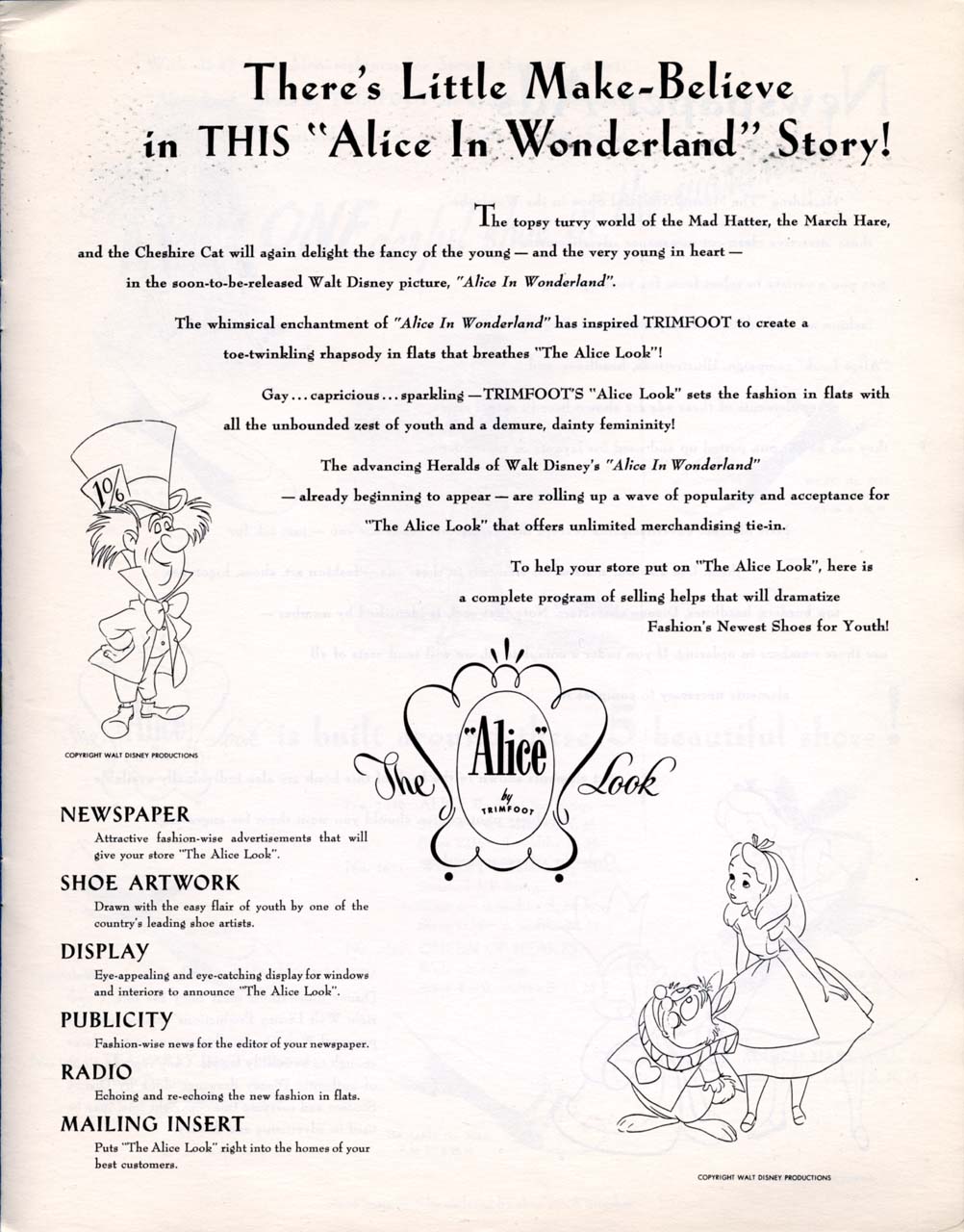 The manual contains sample ads, copy, artwork, you name it, for you and your local shoestore to maximize your "Alice" campaign.  It even pictures some Stensgaard displays that could be ordered to enhance your window treatments. 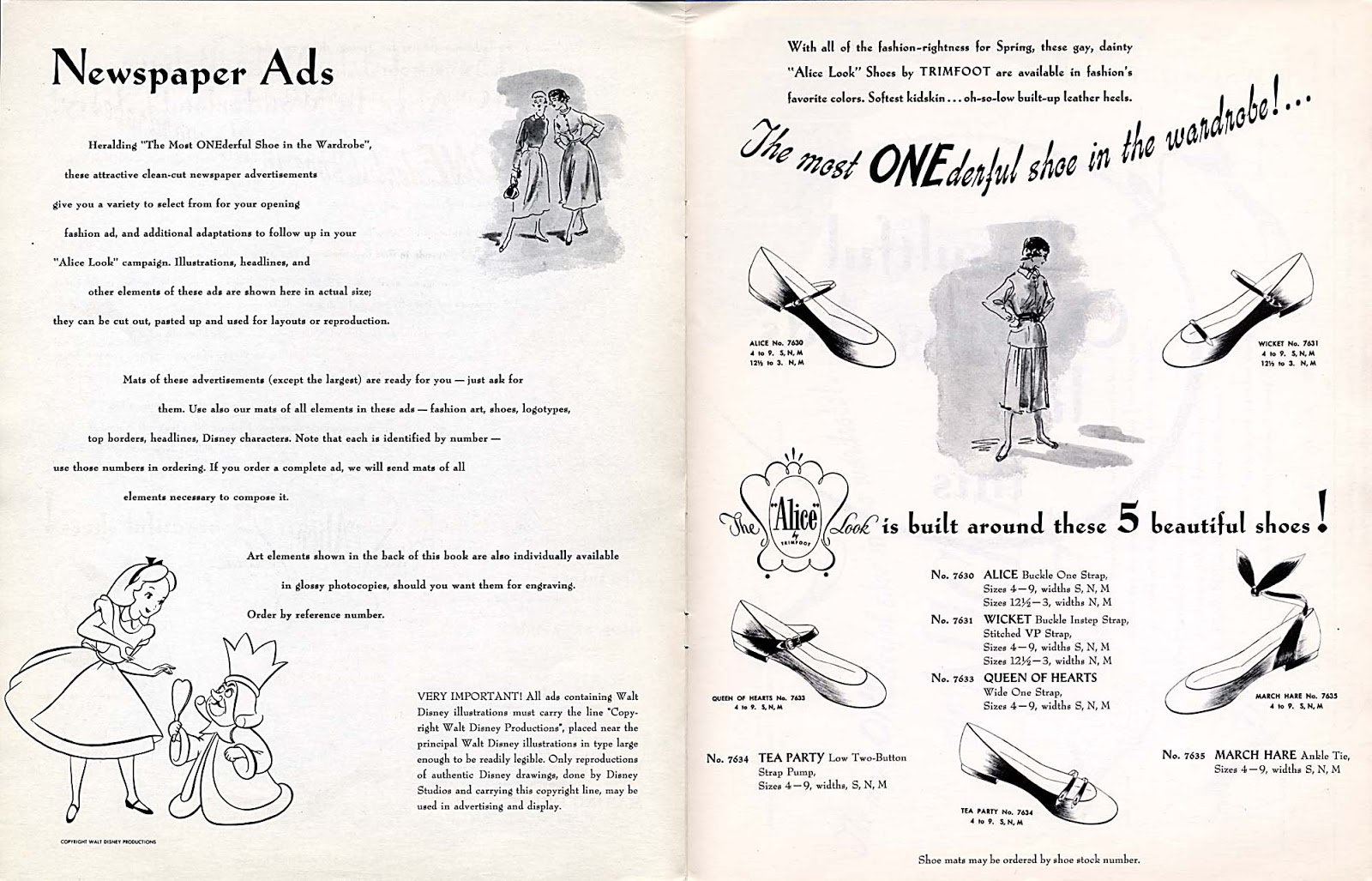 But the best part of course are the shoes, I especially love the "March Hare" with the ear-like appendages on the ankle strap. 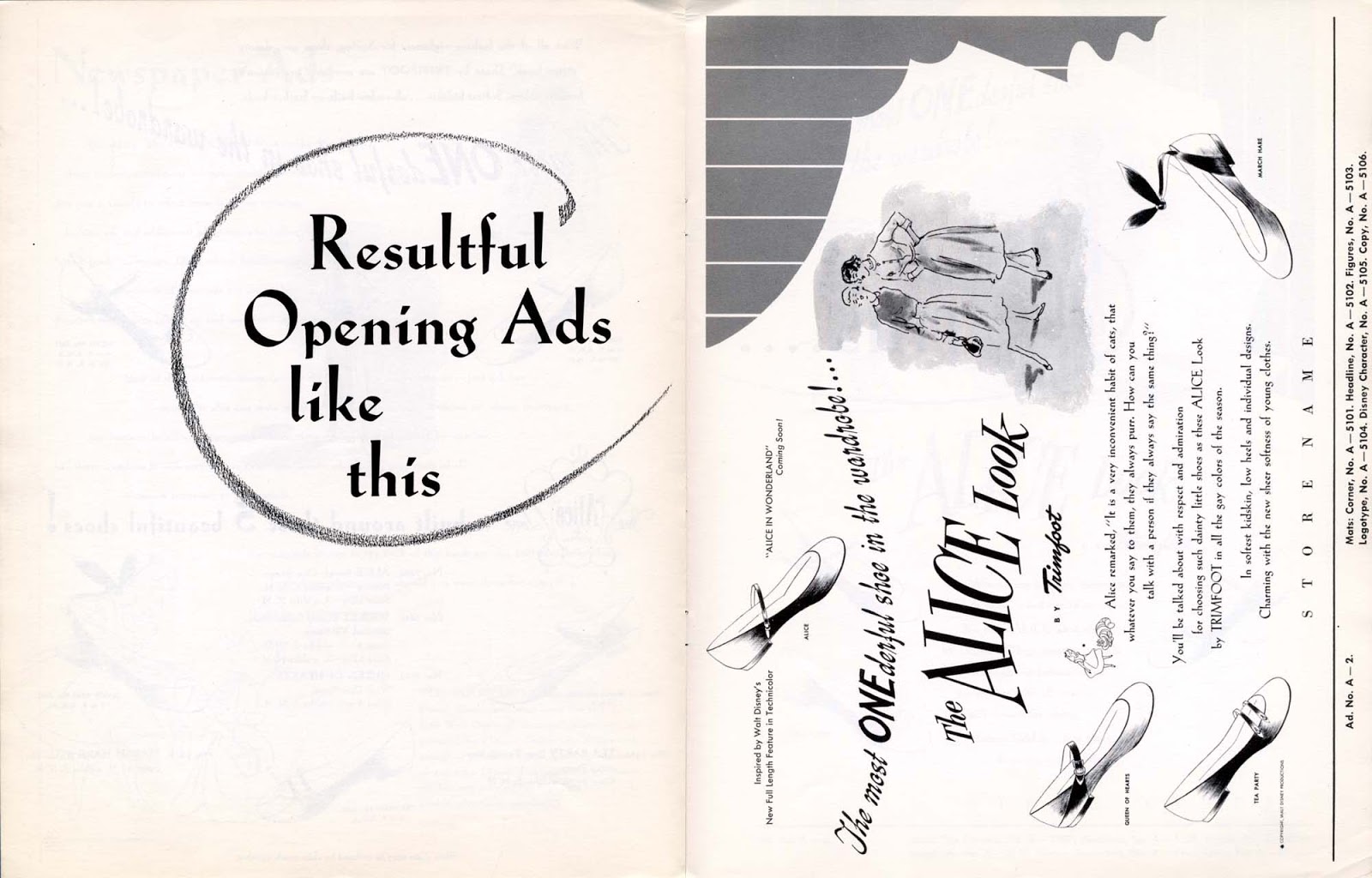 Interestingly Trimfoot still exists, and although they don't appear to have a Disney license per se at this time, they do make some Marvel character shoes, so technically they are still a Disney licensee. 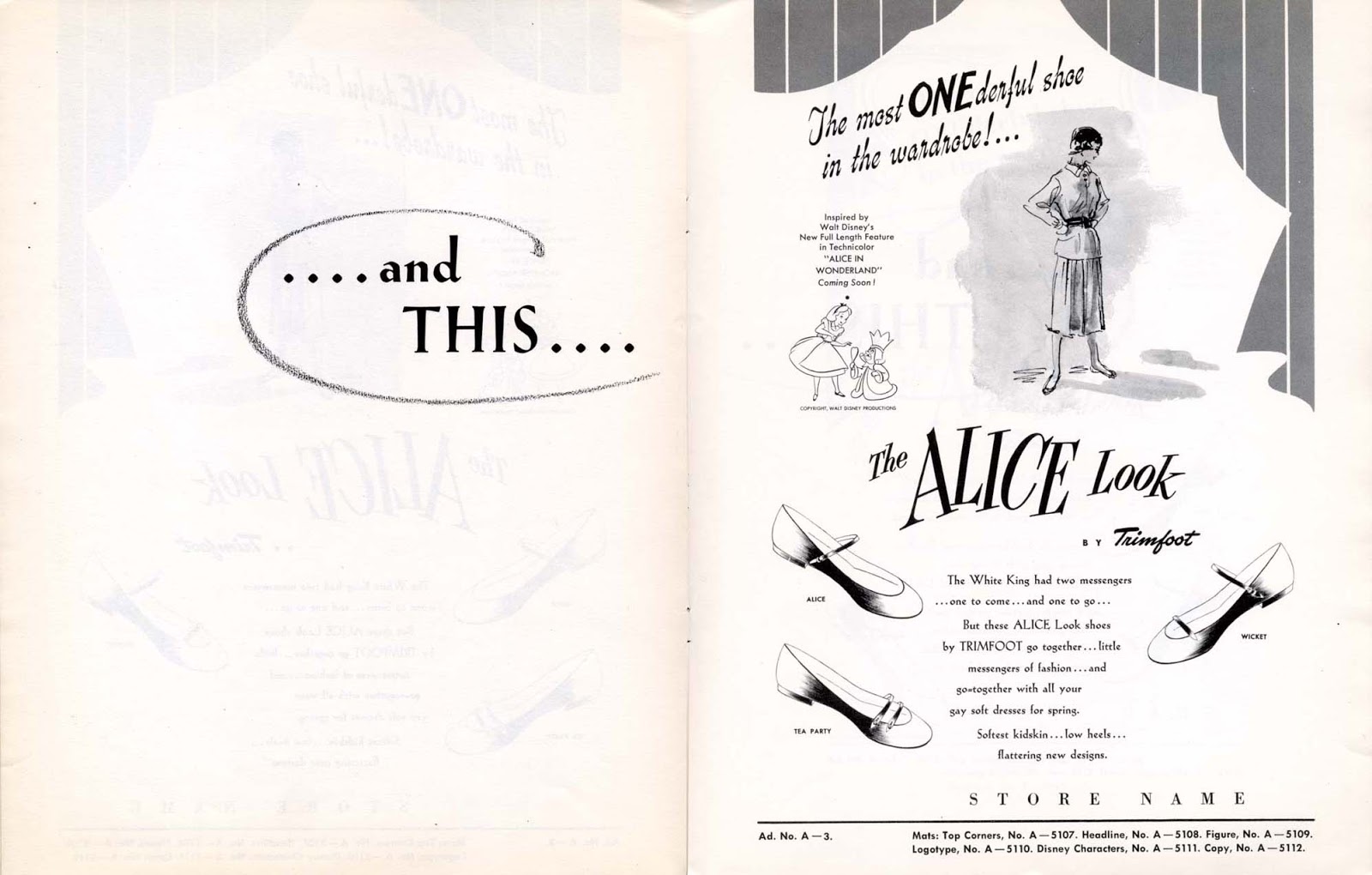 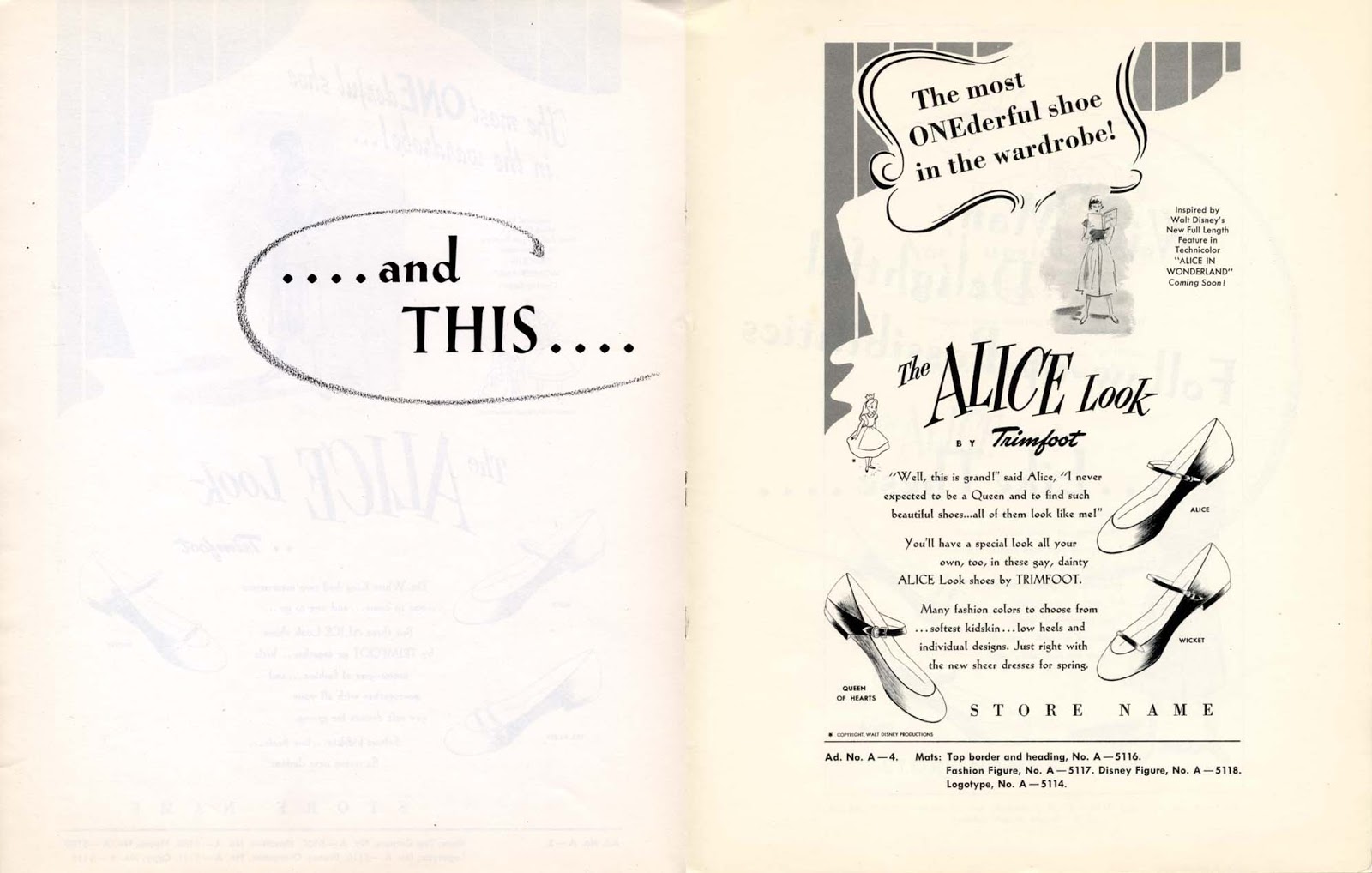 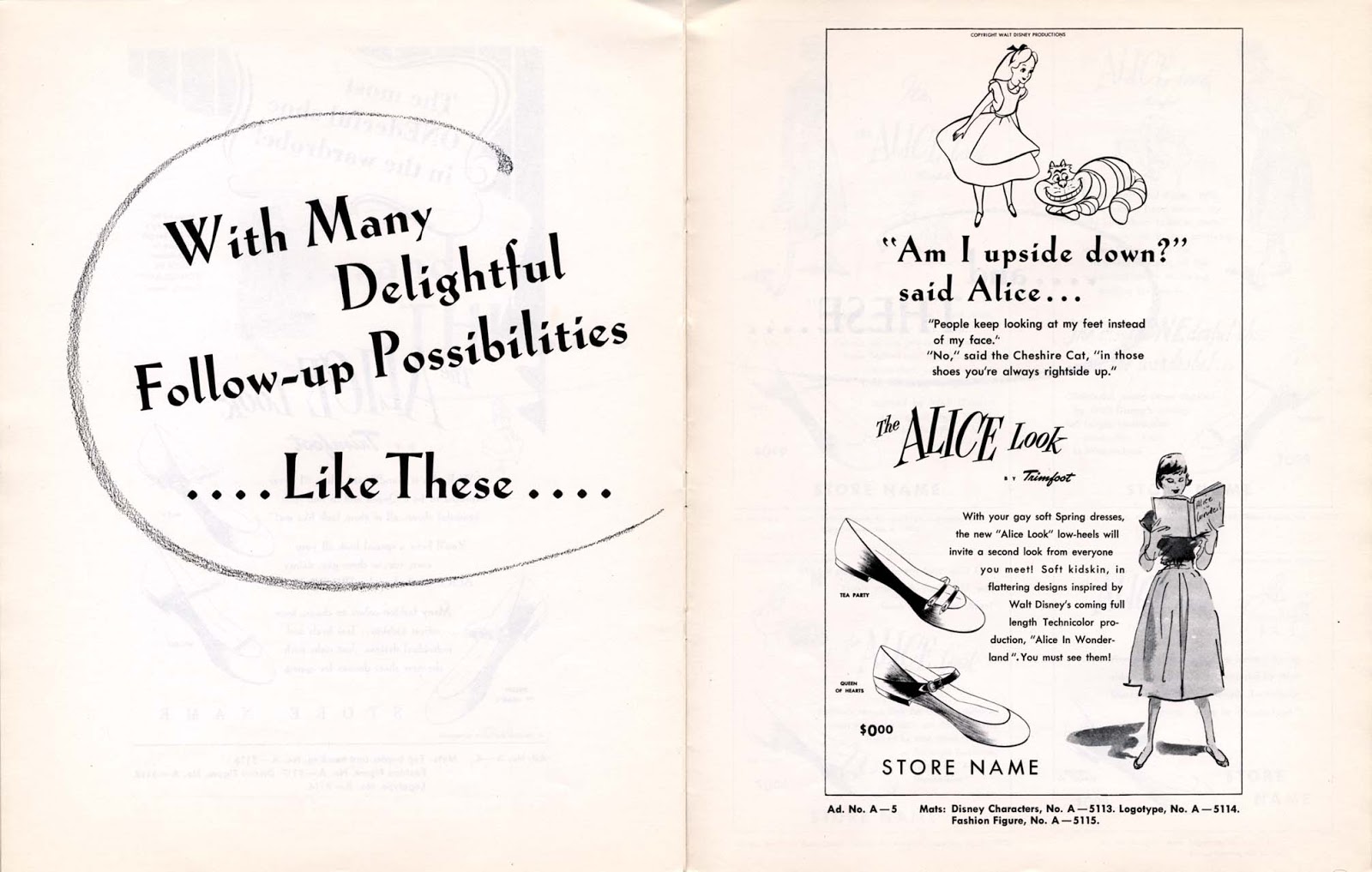 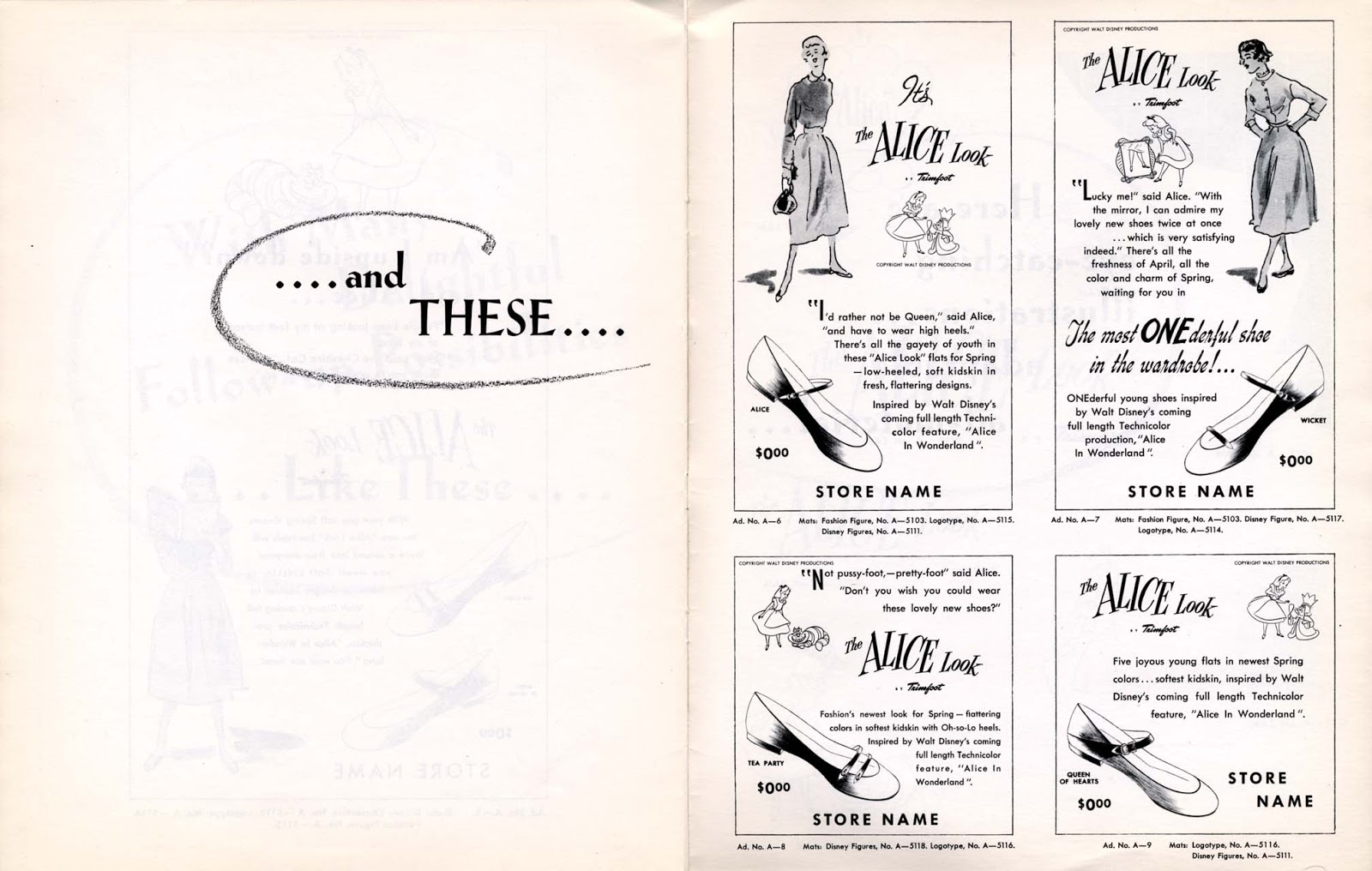 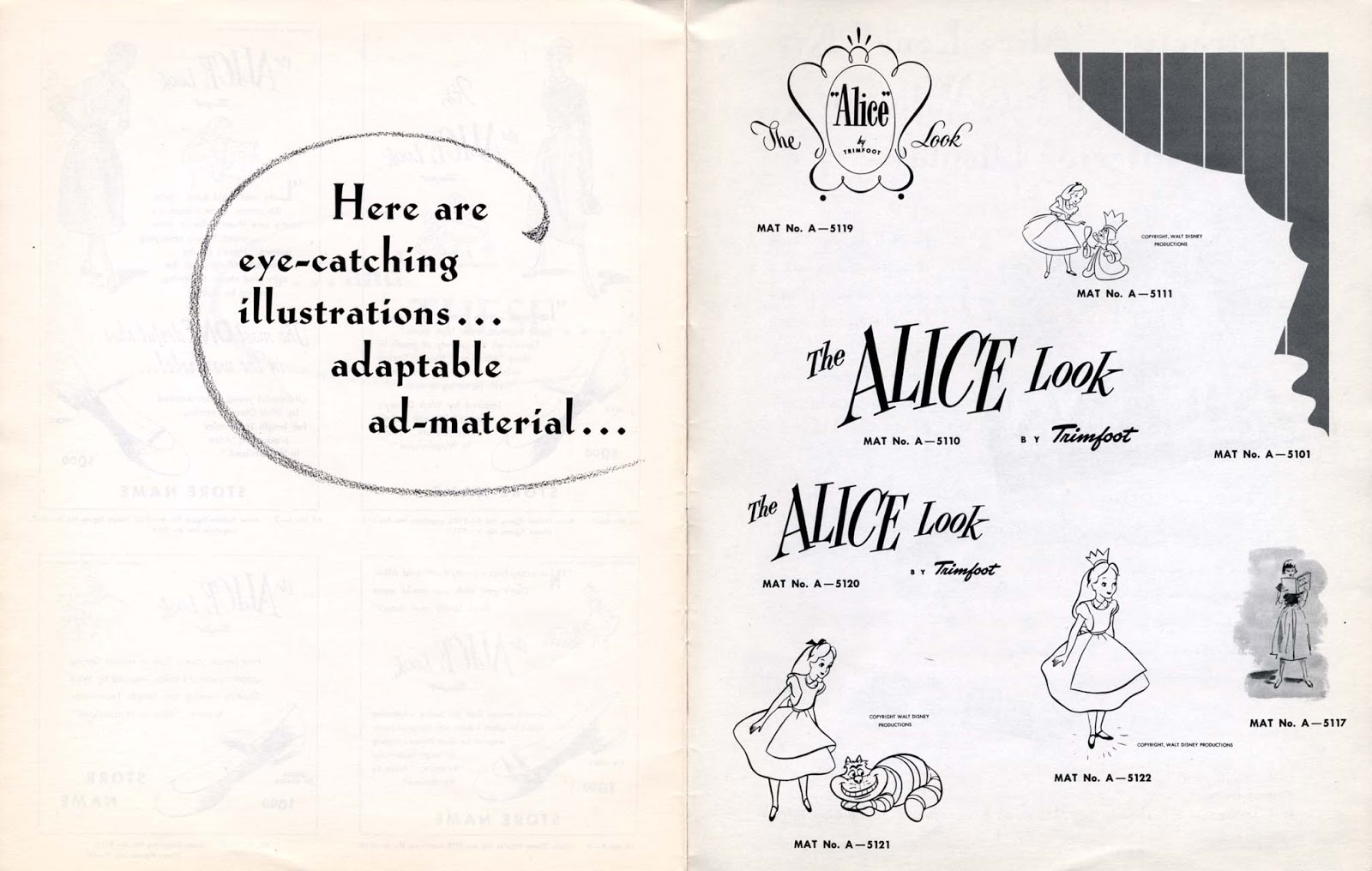 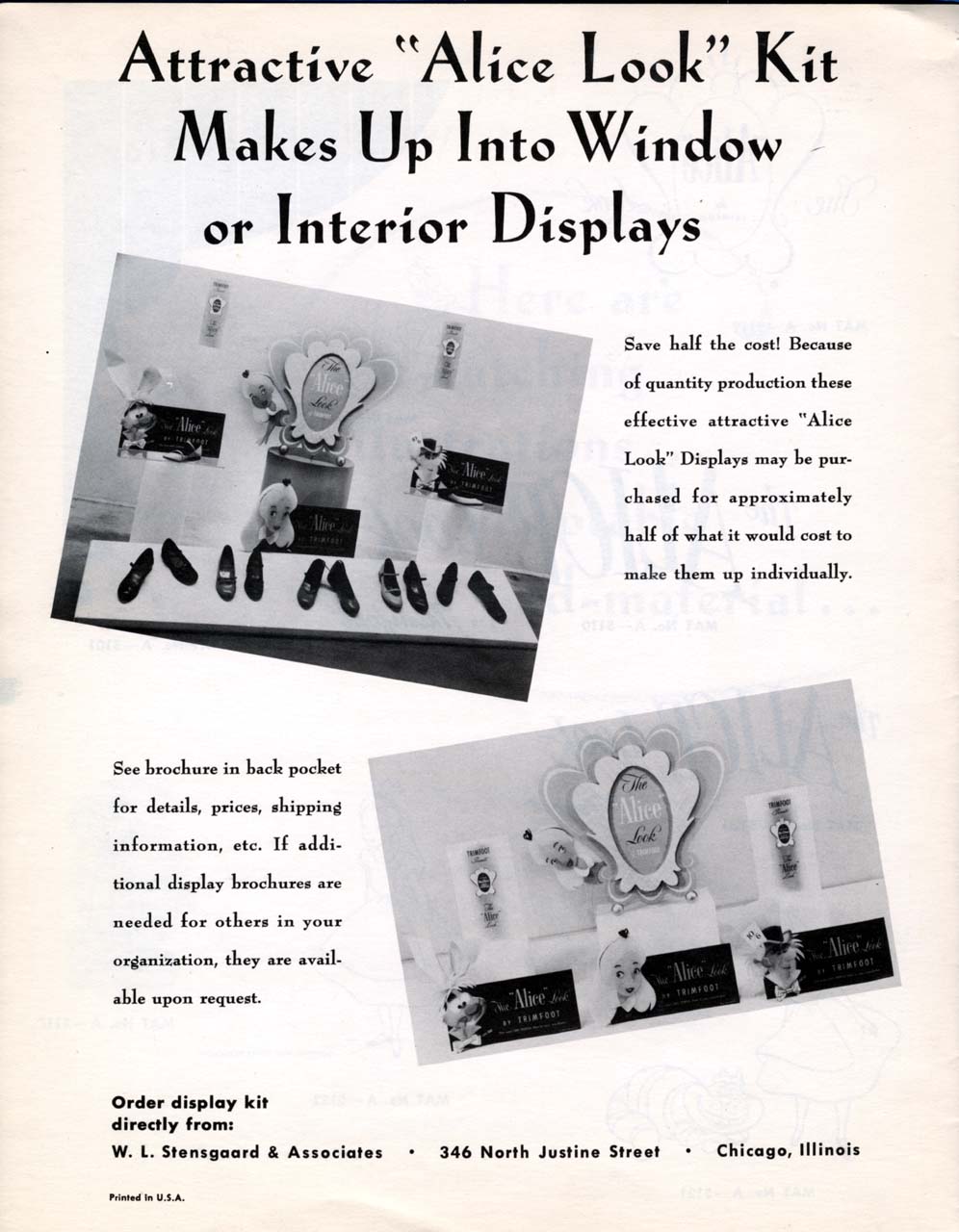 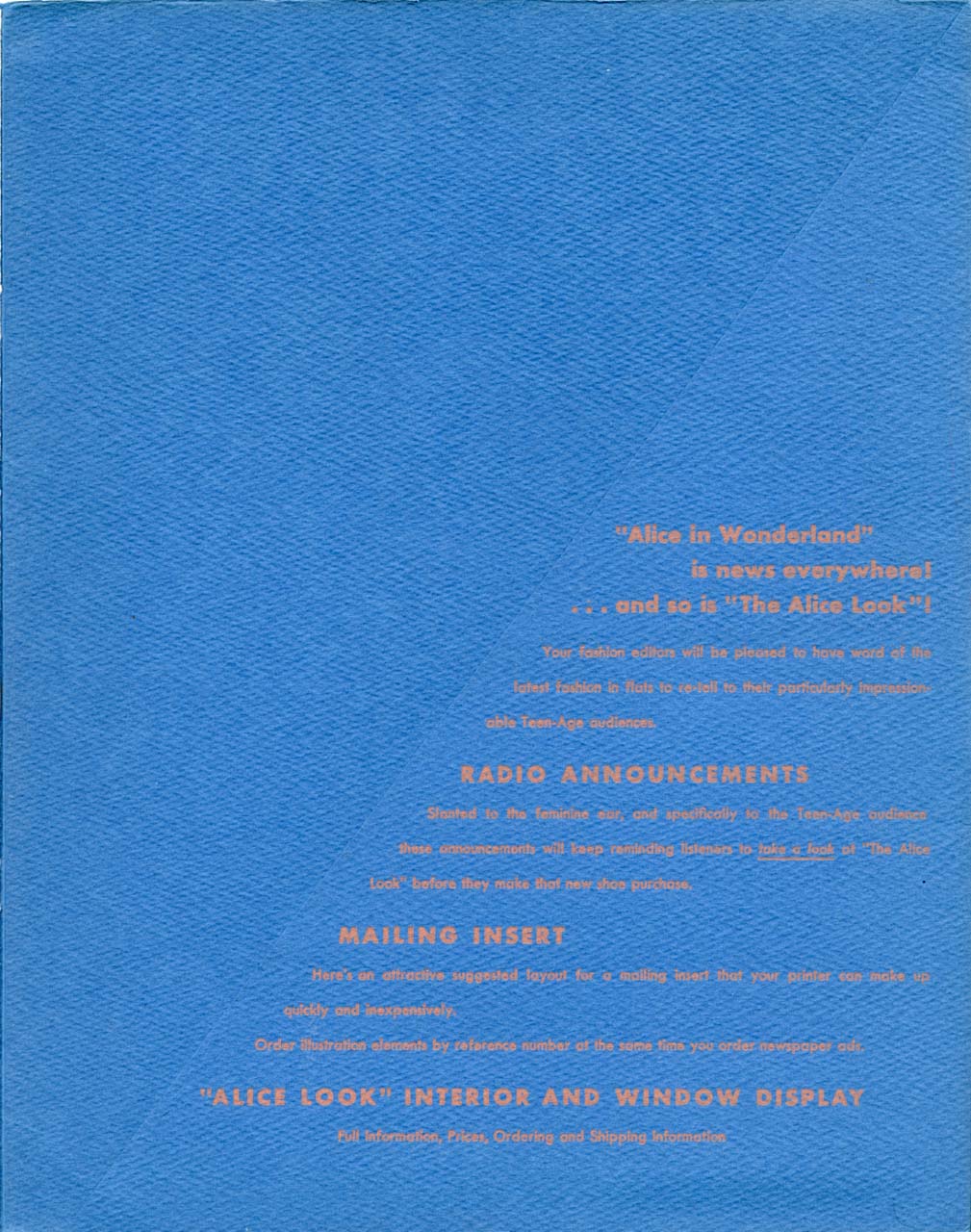 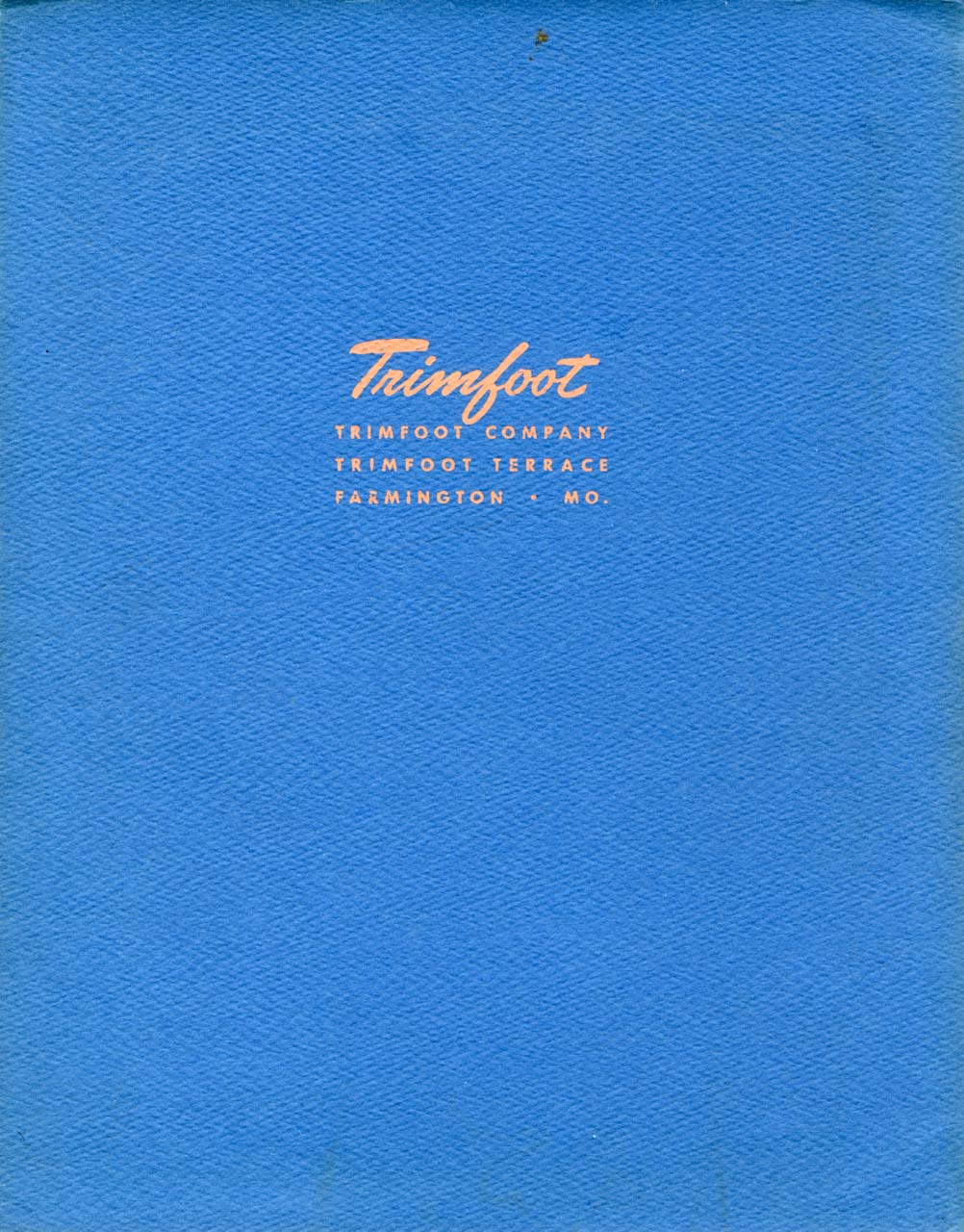 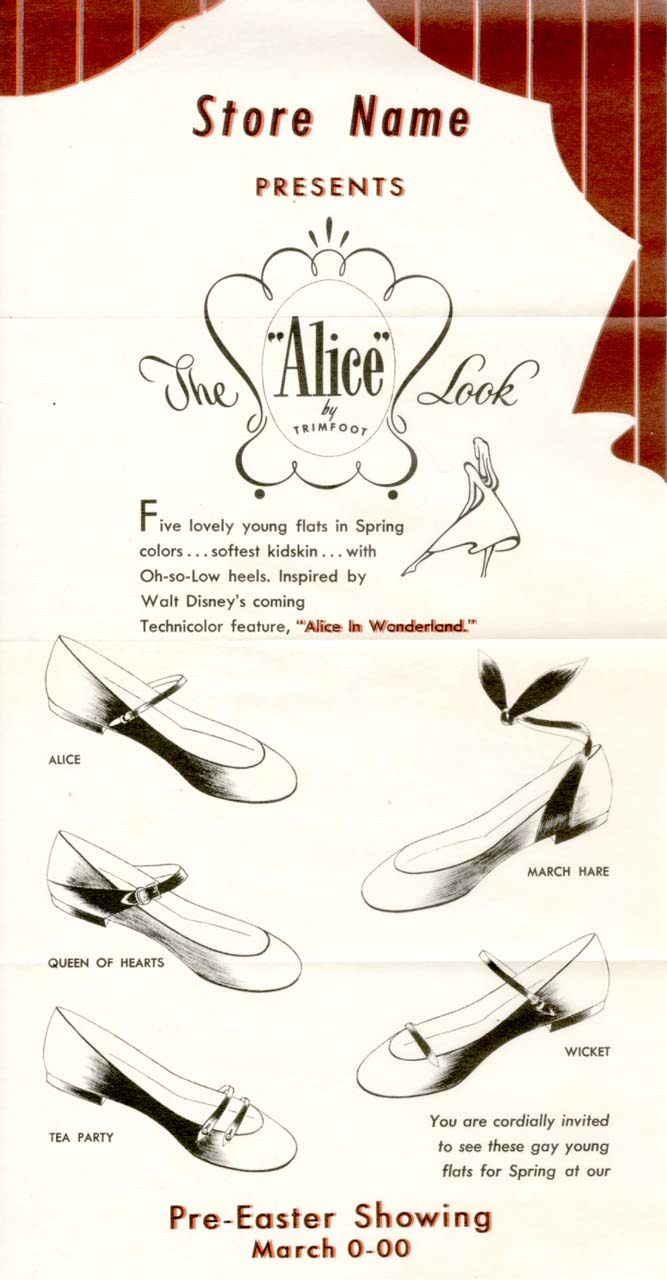 We Made Some Ink! Washingtonian Magazine July 2022

Being residents of the greater DMV (that's DC, Maryland, Virginia for those not in the know), the Washingtonian is our version of New York Magazine or Los Angeles Magazine, with features on local interest, published monthly.  And this month has a one-page feature on the Alice collection, only 6 years in the making!  Pictures below of the cover and our single page, and then an annotated page. 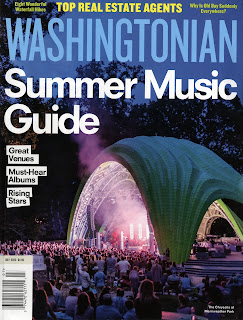 In the photo below, the numbered its are: 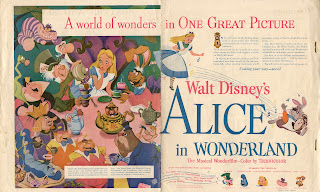 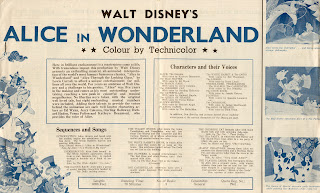 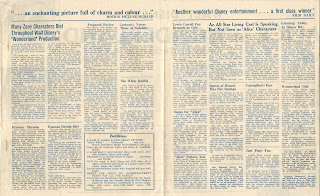 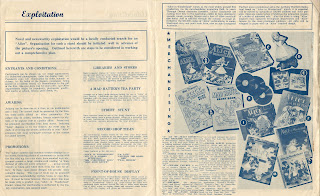 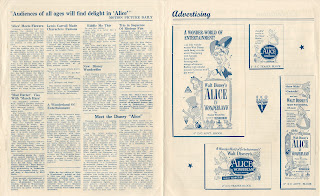 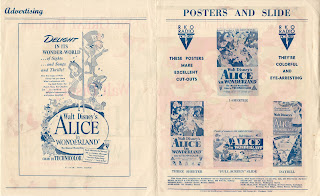 While stereographic (3-D) photography dates back nearly 200 years, it wasn’t until the introduction of Tru-Vue that the format became more streamlined and compact, as it utilized film rather than prints to create the stereo view.  Throughout the 1940s and 1950s subjects were primarily scenes of a travel-related or educational nature, although other scenes based on popular comic strips and comic books were available too such as Blondie, Buck Rogers, and Captain Marvel.  As  they continued to add more subjects geared towards children, titles expanded to include Disney, Howdy Doody, Red Ryder, and other western subjects.
In 1950 Tru-View began producing color films for the first time, partly in response to Sawyer’s competing View-Master product, which had been in color since its 1938 introduction.  The color process selected by Tru-Vue was Ansco, which at the time was more economical than Kodak and provided the needed color reproduction demanded by Ford Motor Company for its promotional film strips.  However Ansco color is not very stable and most films turned magenta over the years, the exception sometimes being cartoon subjects.
Tru-Vue acquired its Disney license in 1950 and held it through 1956.  At the time Tru-Vue was in the process of transitioning from black & white to color, so titles would sometimes appear in both formats.
The Alice films were sold during the original release of the film in 1951, during not only the transition from black and white to color, but also from Tru-Vue’s Rock Island plant to Sawyer’s Beaverton plant.  When one compares the product information contained in the Character Merchandise Division catalog with the actual products themselves, you can see the transition as the company is list in Rock Island in promotional material but Beaverton on product packaging.  One can only imagine the the logistical nightmare of manufacturing, marketing, and selling Alice and all the other products during this time.
The black & white Film (B 51) was issued with the standard red and white box, the black and white film consists of ten scenes, down from the original 14 scenes in the pre-color days.  The films are a little difficult to look at these days, as the intervening 70+ years tightly wound in their little boxes makes them act like watch springs, recoiling violently with the slightest misstep in handling them.
The color film (X 51) was issued in the standard red, yellow, and blue box, the color film consists of the standard nine scenes.
Both the black & white and color sets consist of the four sequentially numbered Disney films:  Alice in Wonderland (51), Bambi (52), Donald Duck (53), and Mickey Mouse (54) in an illustrated box featuring Donald Duck holding a Tru-Vue viewer.