One of the more obscure sets of figures from Alice come from an English company called Weetman. They are most well known for their Cinderella tea set where all the pieces are figural in nature, the tea pot being the pumpkin coach. But they did do a set of figures for Alice as well. I'm not sure how many they did, but for sure they did Mad Hatter, March Hare, Walrus, and Tweedles. They did figures in full color and solid white, and some of the figures also come as salt and peppers. 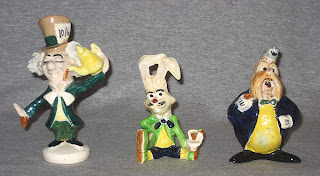 These are the full color variety for the Mad Hatter, March Hare and Walrus. Their painting is rather odd, but has a certain primitive charm to it. Each of these figures retains its original foil label, much like the Shaw figures had, but it is especially uncommon to find them with labels intact. Other than the styling of the characters themselves, the foil label is the only marking that identifies them as Disney. 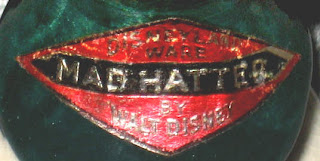 Hi I was hoping that you could help me. I have a Cinderella tea set by weetman but cant find out anything about it. Please get in touch if you can help me.

I have pieces of that tea set too, and an original magazine advertisement as well. If you provide your email address, I can send you a scan of the ad. Or you can look at this ebay item