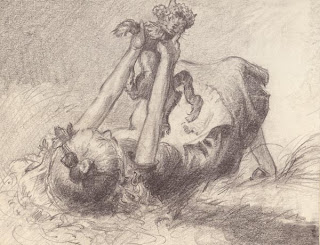 Some of the best story art created at Disney for Alice in Wonderland was done by David Hall in 1939 when the idea for adapting Alice first took shape. There is a lot of information about David Hall out there so I won't go into too much detail about him, but there is a good article about him here. David Hall was only at the studio for a short time in the late 1930s, and contributed story art for Alice and Peter Pan. Some of his Alice story art was published in 1944 in the book Surprise Package, 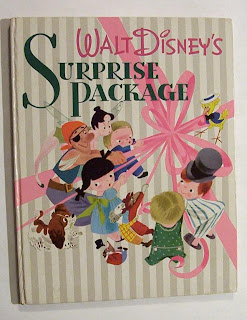 and later in a very nice edition of Alice's Adventure's in Wonderland in 1986. 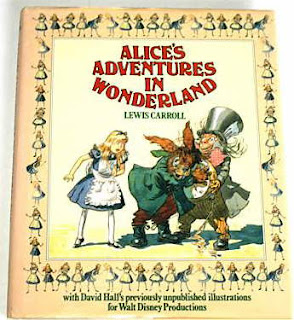 This storyboard was done in late 1939 by David Hall, for a scene early in the film where Alice is playing with Dinah. The original story caption is taped to the storyboard "and sets the silly crown on its head". 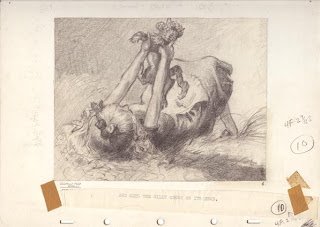 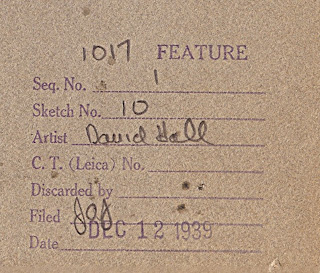 Anyone have a clue as to who 'Filed' this? Notice the feature number, 1017, much earlier than Alice's eventual feature number of 2069.
Posted by Matt at 11:10 PM

I grew up with that "Surprise Package" book, and only realised as grownup what an oddity it was.

My first impressions of Alice in Wonderland therefore come from Hall's macabre images, especially that unforgettable Mad Hatter signpost. I have since seen the rest of them -- what a fantastic artist.

I still like the Disney film, though, and my 2-year old daughter watches it nearly every day.

I have a series of 7 charcoal sketches based on classic British literature and signed David Hall. The signature is printed in all caps. Athough it does not match the signature in your article, it has a similar left slant. Can you provide any additional information on David Hll? mbrandew@gmail.com