Slightly off topic since this is a new item, but worth mentioning I think. This is the collected six-issue mini series comic from Disney / Slave Labor Graphics called Wonderland, with story by Tommy Kovac and art by Sonny Liew. 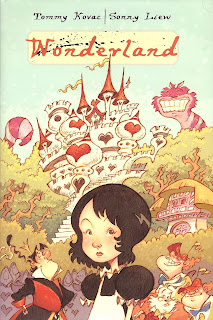 It is a post-Alice story of Wonderland, with all the familiar characters, and a couple of new ones. If you ever wondered who 'Maryann' was, you'll find out, along with what happened to all the other card royalty.

I was surprised at how much I enjoyed this, and I especially like the art, Disney-inspired but with a fresh take.
Posted by Matt at 12:01 AM 0 comments

Today we have the Alice sticker album that was advertised in the poster from yesterday's post. It is a very nice little sticker album, little being the operative word here. Compared to other sticker albums of the day, it is downright tiny, with only 4 interior pages and a total of 45 stickers. If you compare that with the Belgian sticker album's 150 stickers, you get my meaning. 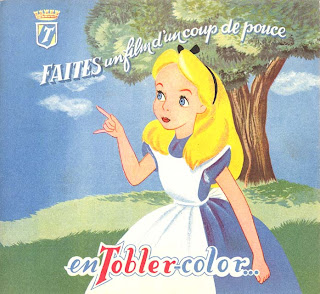 All these Tobler sticker (or really card) albums are made the same way. The interior pages where you place the 'vignettes' is a single, one-color sheet folded once, giving you 4 pages. The cover is a separate piece, slighly larger than the interior pages, again folded once to make 4 pages, and in full color. The Alice album's cover art is quite nice, I've seen generic cover art for other albums, but have not personally seen any other film-specific covers to date. 'Course, I'm not lookin' for 'em either.

The Tobler chocolate company did a lot of Disney promotion over the years. In a previous post I showed you the postcards they did for Alice. They also did a number of sticker albums, Alice included. 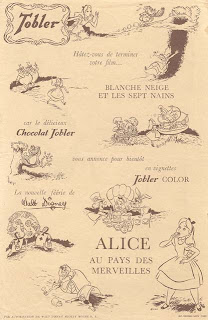 This is the promotional poster or handbill for the Alice sticker album. In reality it is the back side of the full color poster for a Snow White promotion. But really, who cares about Snow White? :) 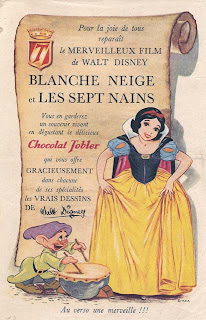 In fact, when I encountered this on ebay several years ago, the seller didn't even list the Alice content on the back, I guessed its existence by the reference on the front to au verso une merveille.
Posted by Matt at 12:01 AM 1 comments

I've never seen another one of these, I got this with a large lot of bread labels, but this (and 3 others - Donald, Figaro, Pluto) was the only one like this. Intense magenta color, hard to see on this label, but on the others you can see the words 'Day Glo Patented', and not gummed on the back, so perhaps a sample? There are what appear to be staple holes in this label, so perhaps that is the case, samples for labels that were never produced. 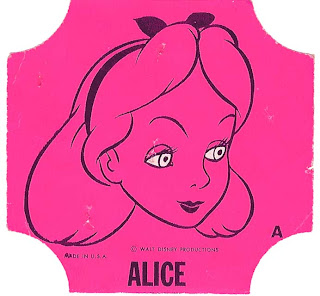 I recently acquired this from England. It is a sterling silver pin of Alice. Although she is only a scant 1½ inches tall, she is incredibly detailed; you can see the texture of her hair! 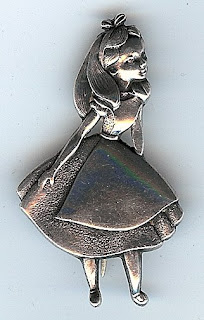 Style, pose, and craftsmanship of this pin put her in the 1950s I would imagine, but I don't know who made it. It is the nicest vintage Alice pin I have ever seen.

I must confess that I don't know what these are. They appear to be some sort of Disneyland trading cards, but there is no identifying information on them other than © WDP. They are the size and shape of regular playing cards - a little on the smallish size - and have interesting monochromatic magenta art depicting Alice characters in Disneyland settings. 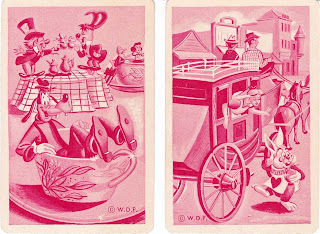 I'm hoping one of my Disneyland readers can help me out here. Major, Patrick, Dave, Tim, Jed - any of you know what these are? 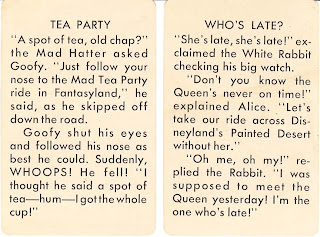 Rounding out yesterday's post, here are the other three sides of the Fred Waring set. 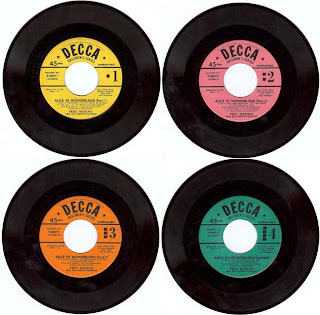 Continuing from yesterday's post, here is the Decca record set from Fred Waring. This particular copy is the 45 set, but there is also a 78 set (Decca CUS 22).

I really love the art on this, especially the plaid Tulgey Wood signpost tree .

Take a listen to side 1

Today is the 58th anniversary of the preview appearance of Alice in Wonderland on the Fred Waring television show March 18th, 1951. Below is a copy of TV Today from the week of March 17th, featuring a blurb on the preview show. 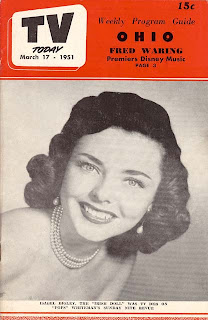 The Fred Waring show was pretty amazing, it devoted the final 30 minutes of their 1 hour broadcast to a fully staged Alice musical vignette, complete with sets designed by Mary Blair! Kathy Beaumont and Sterling Holloway were live and in person acting out their various parts, all to the music from the film as performed by Fred Waring and the Pennsylvanians. That score was later released on Decca records as a two record set with illustrated sleeve (stay tuned for that). 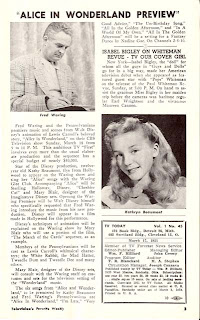 But what was most amazing to me as I again watched this segment today (available in the supplemental material on the most recent DVD)
was the filmed introduction by Walt Disney. My cel makes another guest appearance - almost. The still from my earlier post was actually taken during the filming of this segment, and Walt is frames away from showing my cel on live national television! Stupid editor, would it have killed you to let Walt show all three cel setups he was holding? 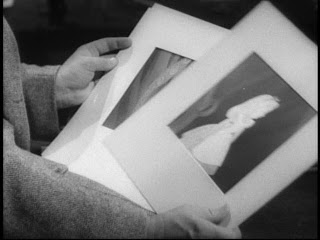 Flash forward about 4 years I think, and Howard Lowery's auctions were in full swing, with at least 2 and sometimes 4 auctions per year. Imagine my surprise when this cel shows up in one of his catalogs. 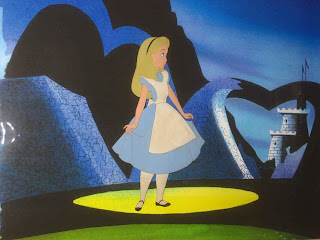 I immediately pulled out my drawing and rushed over to the tiny shop in Burbank to compare my drawing to this cel. It is not an exact match, but it is only a few frames away - I don't recall exactly how many but at the time I did single step through the film to see just how close they were, and it is a matter of 2 or 3 frames.

So of course, I had to have it. And I do, it is happily on my wall with this interesting Xerox background that works pretty well with it.
Posted by Matt at 1:04 AM 4 comments

Today marks 20 years of collecting Alice in Wonderland...something that I cannot even believe myself. Twenty years ago today I went to the Mouse Club Disneyana show in Anaheim and made the conscious decision to focus only on Alice in Wonderland in my Disney collecting; something that up until that day I had not done. I was 24 years old, and had just landed my first 'real' job out of college, having just accepted a position with a small defense contractor in Torrance, CA.

I originally started out as a comic book collector, and since I briefly held a job at a comic book distribution company in Southern California (from the time I graduated college until the 'real' job came along), I had access to lots of comics. I amassed quite a large collection of Disney comics, and occasionally would come across other Disney items from people selling comics to the distribution company. As the company was only interested in comics, I would buy these other items if they appealed to me.

I guess you could say that my first Alice item was the Four Color #331, since that was a comic book that I had acquired during my time at the comic book company. At the time I was collecting all movie adaptations, and had a complete set save for one issue. 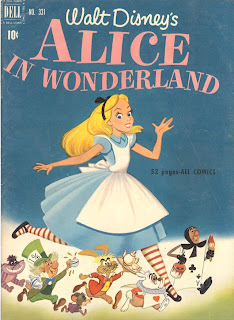 Or perhaps the one-sheet poster, which I acquired from someone in the scenario mentioned above. My intention at the time was to get the one-sheet from every animated feature, something I abandoned rather quickly once I saw what a Snow White one-sheet was going for. 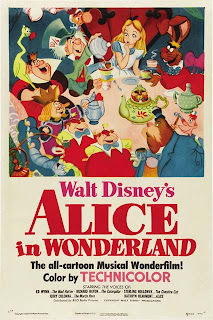 But what I consider my first Alice item is this drawing, which I purchased at the Mouse Club show. 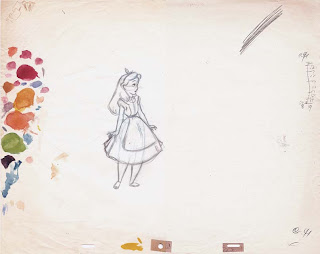 I love this drawing, in spite of, and really because of, its 'faults'. I particularly like the expression on Alice's face. This is from the scene where Alice is interacting with the Queen for first time, and has just finished curtsying to her.

The story of its purchase has remained with me to this day. I remember the dealer I purchased it from, well-known in the SoCal animation circles. He had it on his table in a binder with a lot of other drawings, and people were lined up several deep in front of his table. When I made it to the front, I found this drawing and asked how much, he said "$50", and I said "I'll take it", not believing my luck at finding such an inexpensive animation drawing. And then, behind me, I distinctly heard someone say "Shit!"

Trimfoot Shoes - A Page from the Character Merchandising Division Catalog

This is one of those things that we'll probably never see, but I remain hopeful. From the Character Merchandising Division catalog comes this page featuring "Girls' and Teenage Shoes" by Trimfoot - The ALICE Look! 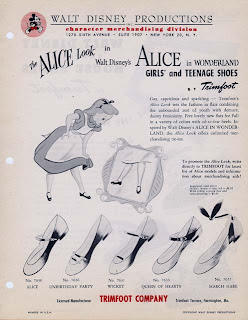 "Gay, capricious, sparkling..." who wouldn't want to wear shoes like that? I don't know about you, but I think those March Hare shoes are pretty cool.

The Trimfoot company is still in business today, still making kids shoes.
Posted by Matt at 12:01 AM 0 comments

Tonight as I was going through binders of photographs looking for something interesting to post in a 'behind the scenes' vein, I made an astounding discovery. Well, astounding to me at least.

This is my only really good cel setup, it is a studio-prepared setup with a studio background (art props most likely) with the cool little WD emblem in the lower right corner and the funky pencil script. I got this at a Howard Lowery auction waaaay back, 1992 or 1993 I think, and I shelled out big time for it, having just sold my entire runs of X-Men and Daredevil comics to finance this particular purchase. 'Cause, you know, there's no future in comic book resale value compared to animation art... 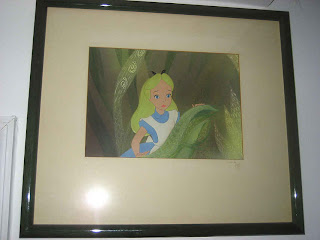 Tonight, as I was looking for photos (Walt with ink and paint girls, Walt with Ward and Mad Hatter art, Walt with multiplane camera, ho hum) I found this one. Looks intriguing, lots of Mary Blair art on the walls, movieola in the background, Evan K Shaw figures on the desk, oh, and Walt is holding two cel setups. The eye is immediately drawn to the one he is looking at, a large close up of Alice. But wait, the cel in his right hand looks so familiar. 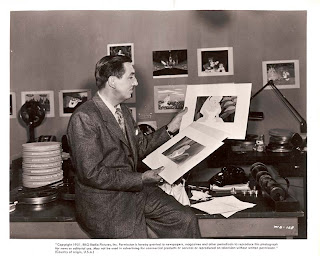 With my limited photoshop skills I was able to isolate that part of the photo and do a little perspective rotating and skewing, and voilà! It is indeed my cel setup. And Walt held it...thumbprint right on the mat and everything...pretty damn cool if you ask me. 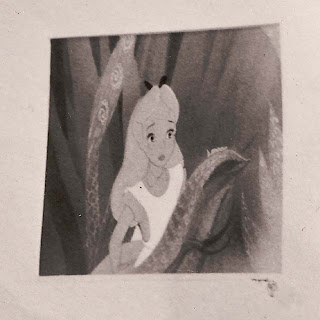 Hard to believe this is my 200th post, and I've had just over 30,000 visitors. Of course most of those hits were people looking for sewing patterns for Alice costumes, or free coloring pages.

The first time I ever heard of this toy was in the oddest place. It was at the movies. It was 1995, and I got dragged to see Dracula, Dead and Loving It (ugh). Before the movie started, the theater showed slides on the screen, some with ads, some with trivia. And then all of a sudden this toy appeared on the screen. 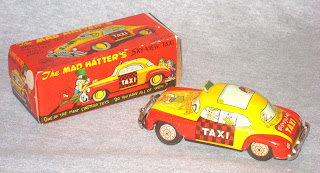 It was a slide showing an auction result from Smith House Toys, I believe the final hammer price was something like $1800, which was pretty spectacular. I remember actually standing up in my seat. My friends were of course highly amused. I even tried to get the theater to part with the slide (to no avail).