Merry Christmas to all my faithful readers out there. Here's hoping your holidays are happy and safe. 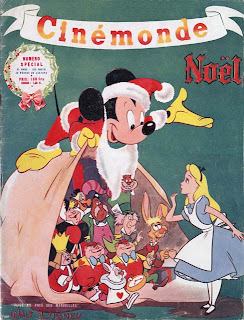 This is the cover to the Christmas special edition of a French film magazine called Cinémonde. I love this cover, Santa Mickey is delivering his Christmas present to France, the theatrical release of Alice in Wonderland. Inside is a six-page article on the making of the film (stay tuned for those pages) as well as a two-page article on the True Life Adventures.
Posted by Matt at 12:01 AM 2 comments 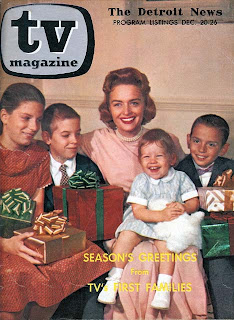 Inside we get a nice piece of winter-themed Alice art accompanying the blurb on the Christmas night episode of Walt Disney Presents which aired Alice in Wonderland. This was the fourth time the film was on the Walt Disney show, and the second time a Christmas night Disney show featured Alice - the first being One Hour in Wonderland. Notice that the Walrus in this piece of art was later rendered as a pin in a Disney Store advent set somewhere around 2005 or so. 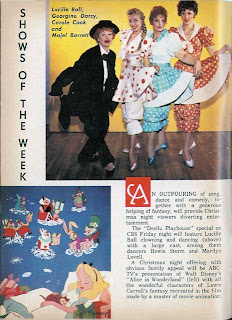 Interesting to see who's in the picture above the Alice blurb. Besides the obvious Lucille Ball is a young up and coming actress name Majel Barrett in the red outfit with white polka dots. She would of course later become famous as Nurse Chapel on the original Star Trek series, and Lwaxana Troi on Star Trek: Next Generation.
Posted by Matt at 12:01 AM 3 comments

Courtesy of my friend Christopher over at Disney MCP Figurines comes this photo of the elusive March Hare from MCP. This leaves only the Walrus and Dormouse figures unseen, although rumor has it that the Disney Archive has a full set of eight. 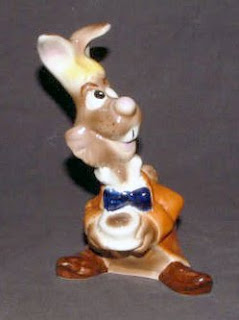 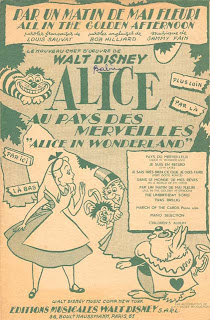 This is one of a set of monotone sheets, where each title is a different color. So far I've seen three colors: green (All in the Golden Afternoon, Very Good Advice), 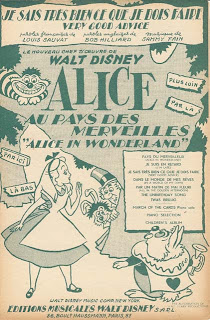 blue (Alice in Wonderland, In a World of My Own), 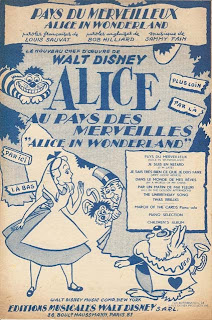 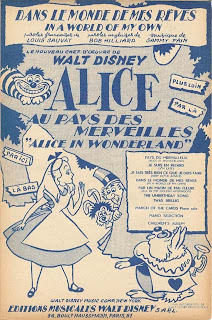 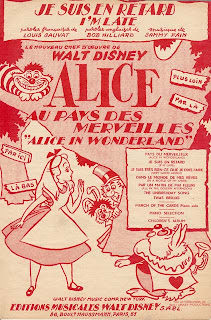 I do not own copies of The Unbirthday Song, Twas Brillig or March of the Cards. Presumably one of them is red, and perhaps there is a fourth color I've not seen yet for the remaining two (which would be nicely symmetrical), perhaps black, brown, yellow or orange.

The thing about these sheets that is so odd is that except for their size (roughly 2/3 the size of the sheet from yesterday) and the fact that these are printed on the world's cheapest paper, they are the same as yesterday's sheet. Same publisher, same address, same set of songs listed, same advert on the back for Cinderella music. So I really have no idea what these are. It is possible that these are from a later period, but seems unlikely since re-releases produced far fewer song sheets, usually only I'm Late. I suppose these could be an inexpensive variant, perhaps for schools or something. I'll probably never know for sure.
Posted by Matt at 12:01 AM 2 comments

More sheet music from the original release (I think), this time from France. Notice again the same artwork - or nearly. It is slightly more primitive looking, especially the Cheshire Cat. 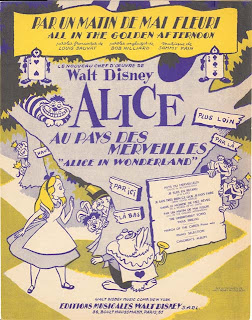 Notice also the similar weird color scheme as in the American and Australian sheets - combinations of blue, yellow and green, although not exactly the same.

This is the only piece I've found that looks like this and is about the same size as the American and Australian. I have however found some other French sheet music that is more different still. Stay tuned tomorrow.
Posted by Matt at 12:01 AM 0 comments

Continuing in my lazy posting mode, we have more sheet music, this time from England. As with the American and Australian sheet music, all titles have the same art, although this time it is this bizarre two-tone orange and black (yuck). 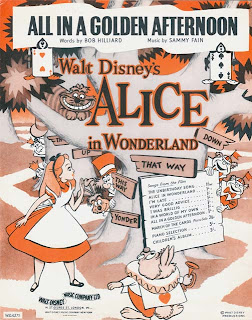 The same eight songs are listed on the front as on the American and Australian editions, I do not know if there is the ninth title (How D'You Do and Shake Hands) as I have not seen one. I am missing only a single (known) title - Twas Brillig - to complete my set.

Notice also that there are two other items listed here - Piano Selection and Children's Album. Stay tuned for future posts!
Posted by Matt at 12:01 AM 0 comments

So I'm feeling lazy, and this seemed like an easy way to get out of a lot of scanning. The Australian version of the sheet music is identical to the US version - even has the same additional song not listed. Art is the same, size is the same, everything is the same except the price and the printer - D Davis & Co Pty Ltd rather than Walt Disney Music Company. 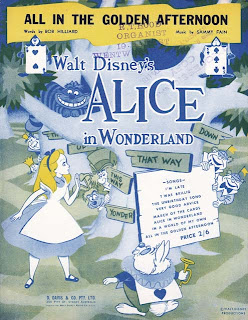 Also I don't have the full set of Australian sheet music, I'm missing the title song so that's a convenient excuse to not scan the full set too!
Posted by Matt at 12:41 AM 0 comments

Alice in Wonderland has more songs than any other Disney film. As such, it has a LOT of sheet music, although not every song in the film. 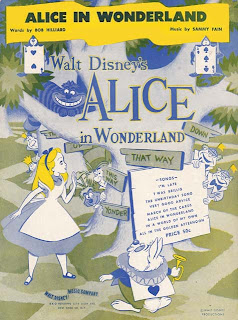 Sheet music from the original release has a fully illustrated cover - oddly in a three color process - and the same art is used for each title. 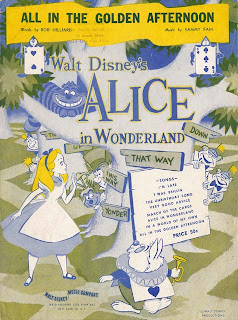 There are a total of nine songs issued as individual sheets, which is odd when you look at the list of available titles on the cover of each. 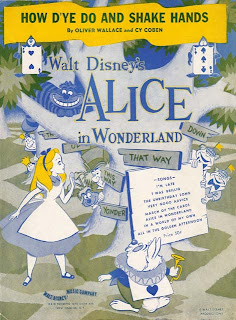 This title, How D'You Do and Shake Hands, is not listed on the cover but was (obviously) issued. 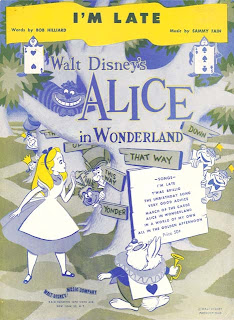 The other songs from the film that did not get a sheet are The Walrus and the Carpenter, A-E-I-O-U, Painting the Roses Red, and The Caucus Race. 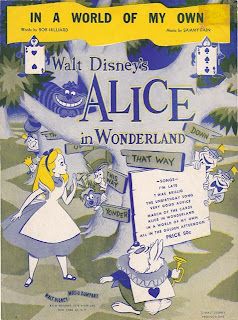 The sheet of March of the Cards is particularly tricky, as it has an additional insert page that is often lost. 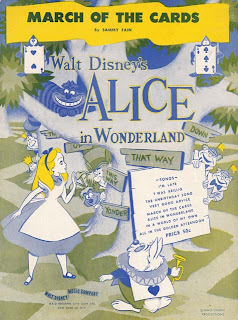 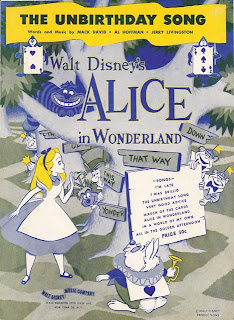 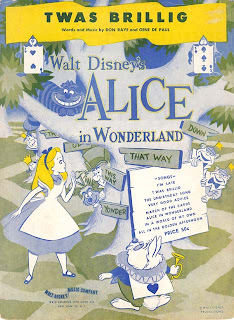 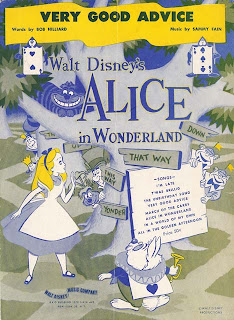