Our final installment in issue #86 finds Alice receiving her verdict 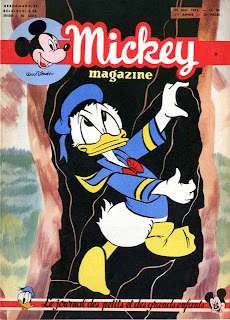 and fleeing Wonderland for home. 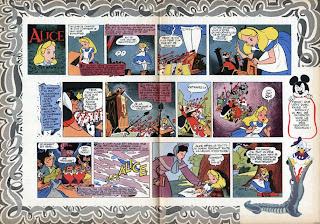 I always knew drawings like these existed, but had never seen any until I acquired this set.  Yet more courtroom art, gotta love it!.  These are (what are now called) rotoscope drawings.  I'm not sure when that term came into existence, but the technique has been around for nearly 100 years.  It is unclear to me how much the animators relied on these tracings, but let's look at how they compare to the final film.  First up we have what appears to be Alice scoffing at the Dormouse's testimony "twinkle, twinkle - what next?" 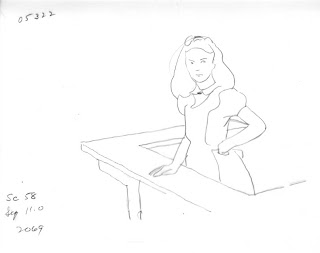 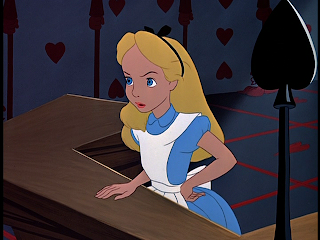 Going back in time a little, we have Alice correcting the Queen "unimportant your majesty means" 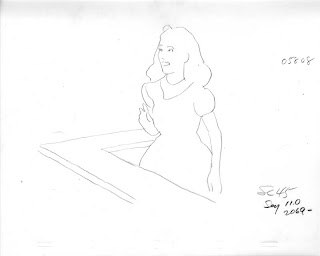 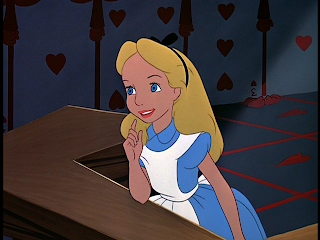 followed by Alice's reaction to the Queen bellowing at her for "silence". 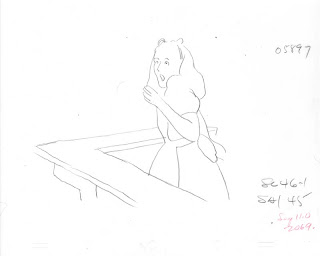 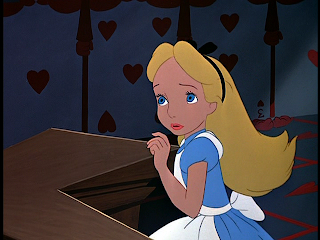 And finally we have Alice looking on in wonder and dismay as the entire courtroom exclaims on the fact that it is the Queen's unbirthday. 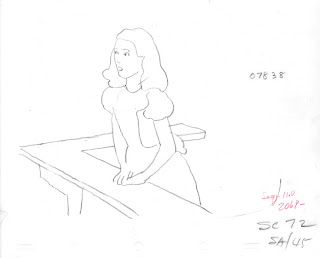 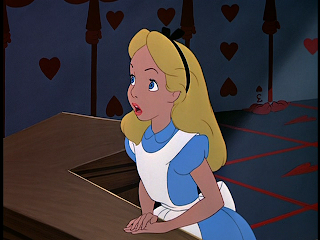 Based on these comparisons, I feel that these are not true rotoscopes, but were indeed used as a starting point for the animation.  There are lots of little differences (even taking into account that my screen grabs are not exact), but the basics of the layout, pose, and expression were clearly influenced by the reference tracings.

Getting near the end now, our second to last installment in issue #85 features Alice meeting the Queen and King of Hearts for a game of croquet. 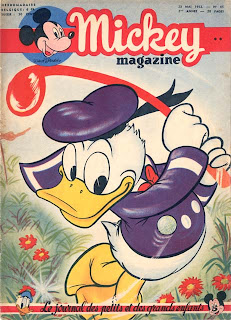 Then let the trial begin! 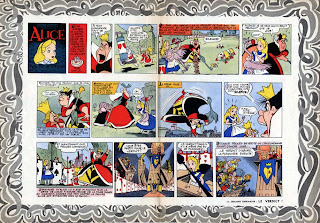 Whaddya know, an issue of Mickey Magazine with Mickey on the cover.  This installment, issue #84, features Alice encountering the Cheshire Cat once again, 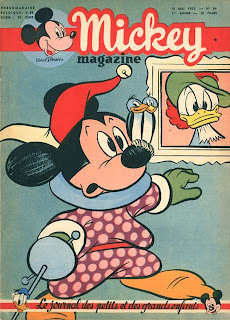 and painting the roses with the Card Gardeners. 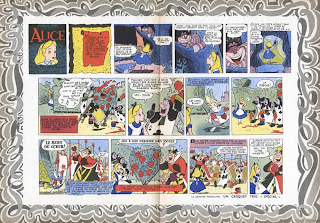 While this is not really from Alice in Wonderland, it is fun.  An original model sheet from the short Donald in Mathemagic Land.  I don't know about you, but this short was a staple in my primary school education; I must have seen this a dozen times over the years in classrooms, and all on 16mm film of course.  I was even one of the A/V guys one year, no wonder the chicks dug me. 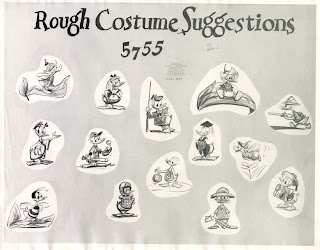 As we know, Donald does a brief turn in drag as Alice from Through the Looking Glass when the subject turns to mathematics in games, and the discussion turns to chess. 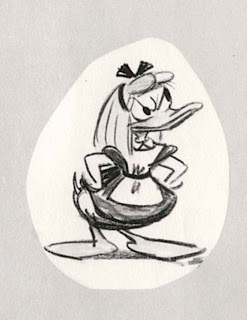 I'd say the final animation got the attitude of Donald pretty close to his model sheet counterpart, wouldn't you? 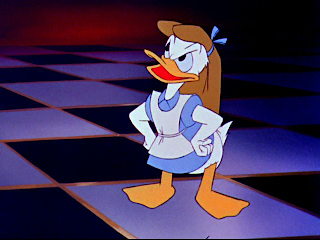 Our next installment, issue #83, featuring Alice in the Tulgey Wood 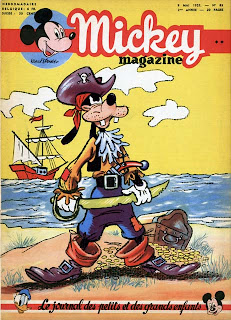 amongst all the bizarre denizens therein.  I especially like the Mome Raths. 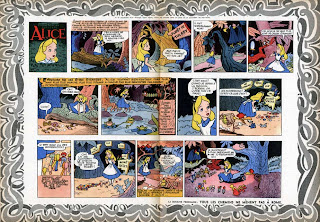 I seem to be in a courtroom mode these days, but probably only because long ago I was lucky enough to acquire a bunch of art from that sequence.  Today's layout drawing is a fantastic and large vertical pan layout for the White Rabbit's bailiff stand.

What's neat about this particular layout is that there are framing notes on the drawing itself.  While I'm not familiar with the terminology (hoping Hans reads this and tells me what these mean specifically), I can guess that they refer to the starting and ending shots for this background.

If you look closely at the drawing above you'll see what appear to be crop marks in two locations on the drawing.  I've highlighted what the boxes would look like in the image below.

if you extract the marked frames, you'll see what is apparently the start of the White Rabbit's ascent of the stairs 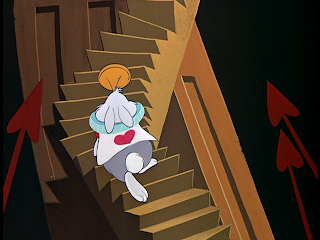 and his eventual position at the top of the stand.  Looks a little different from what eventually ended up in the film, probably why this drawing is marked 'discard', but pretty close. 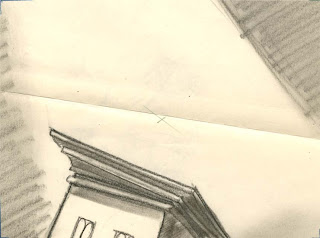 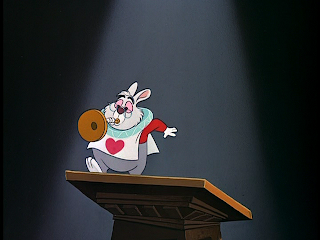 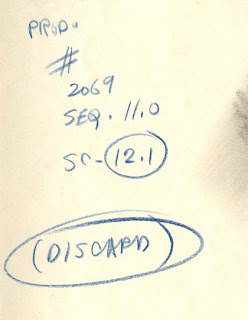 Today we have a very interesting model sheet, the Dodo Suggestions model sheet (550-8007).   What I like about the various 'suggestions' model sheets is their rough nature, a lot of the construction of the characters is still visible whereas a 'final' model sheet is generally taken directly from cleanup animation drawings. 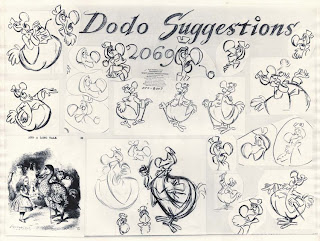 Also, a word about model sheet numbers.  The code number dates the model sheet.  This sheet has code 550-8007, the 550 represents May of 1950.  The 8007 is some other internal numbering scheme, probably having to do with when the sheet was registered with the production staff, but that is unclear to me.
Posted by Matt at 11:55 AM 1 comments

Our next installment in issue #82 featuring the Mad Tea Party, 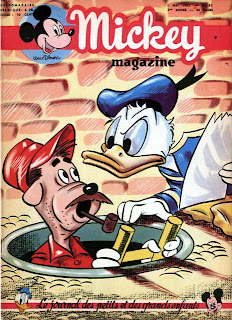 featuring the Mad Hatter and March Hare, and a brief appearance by the White Rabbit. 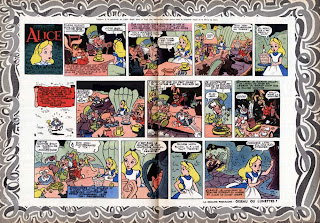