Happy Thanksgiving to all my faithful readers here in the USA.  For those in Canada, I'm a tad late, and to those elsewhere, have some roast turkey anyway. 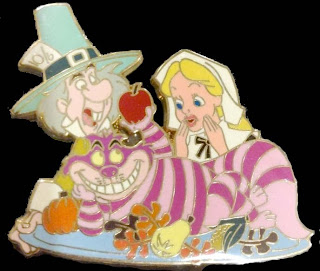 A truly hideous pin, one wonders if they are preparing to roast the Cheshire Cat, or if he ate the whole bird!  Either way, Alice has been using far too much collagen for her years.
Posted by Matt at 12:00 AM 0 comments

While not earth-shattering in the grand scheme of things, I did receive news this week that surprised me:  The Walt Disney Classics Collection is no more.  In a nutshell here's what happened.  Late last year (2012) Enesco announced they would not be renewing its license for WDCC and that the license would go to another vendor.  In early 2013 it was announced that PMI (that's Precious Moments Inc) had acquired the license.  This was met with skepticism by the WDCC community, but when some images 'leaked' of some proposed figures (see below), the internets exploded. 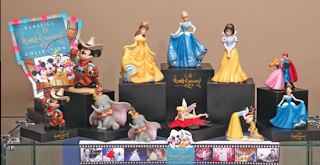 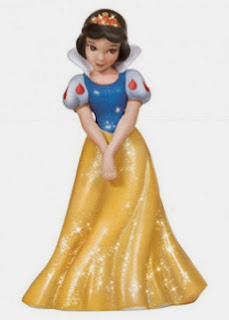 While I do have a few WDCC, I can say that it is not a focus of my collection, but even I have to say these look pretty bad.  Anyway, PMI stated that these were only mockups and not production figures, but lo and behold these were later released under the Disney Showcase imprint.  Then this past week PMI announced on their Facebook page that they and Disney had jointly decided to not move forward with the WDCC line. 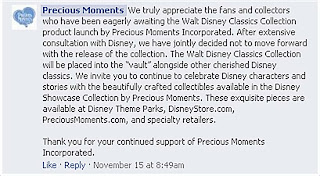 Meaning, WDCC is dead and gone.  It may resurface one day, but I doubt it.
Posted by Matt at 3:19 PM 0 comments

A milestone for the blog passed this week, just over 500,000 page views since the inception of the blog.  Who would've thought so many of us were out there?  Thanks to all my faithful readers out there!

Last but not least, model WD37, another schoolbag, but with some differences.  Firstly, it is smaller, about 2" small in each dimension.  Secondly, it has neither a pencil pocket, lunch pocket, nor reinforced corners.  Thirdly it has a snap closure flap. and finally it only comes with a shoulder strap. 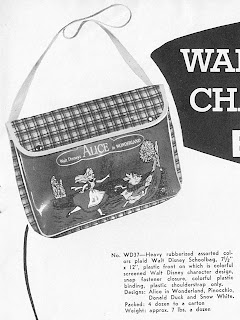 And most importantly, I don't have one.  So keep your eyes peeled out there!
Posted by Matt at 12:00 AM 0 comments

Next up is WD30, the Schoolbag.  These days I believe I would call this a satchel.  The 'rubberized' material makes this very stiff after 60 years, but the 'texon' flaps are in good shape.  This first one is the handled variant. 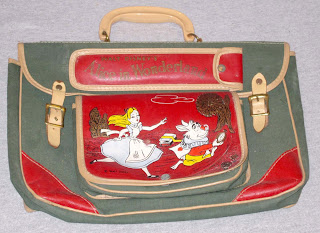 There is also a variant with a strap 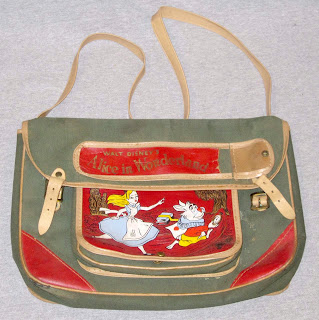 and a variant with no corner reinforcements. 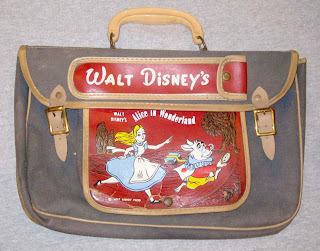 This particular variant actually  has a different stock number JWD30 based on the catalog pages for the Peter Pan models, even though they don't specifically list an Alice J model.  It also came with either a handle or a strap, but I only have the handle variation. 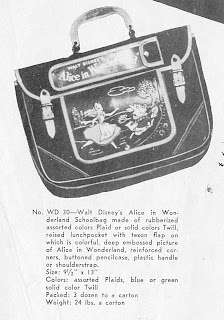 All of these bags came in plaid as well, and I have had plaid ones in the past, but don't have any at this time.  Gotta make room for new stuff after all, can't have EVERY variation (although I do make a pretty good stab at it).
Posted by Matt at 12:00 AM 1 comments

Next up is WD20, the Utiility Bag.  To me this looks like a smallish bowling bag, but I've also seen vintage airline bags with this shape as well. 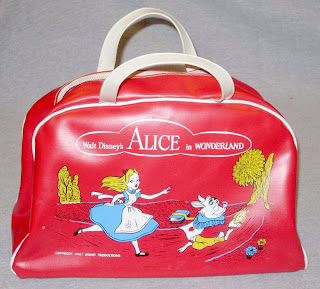 Given that this is 'plastic' (probably some sort of vinyl really) these bags are in remarkably good condition, and remain very supple. 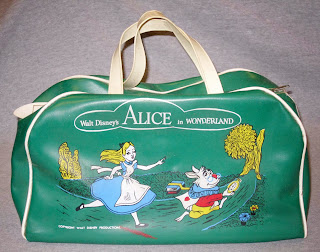 So far I've only seen the two colors here, but it is possible that there are others.  No plaid though. 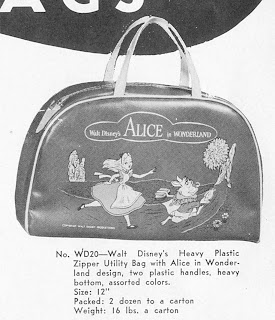 And now the bags themselves.  First up is WD10, the shoulder bag.  This example is a solid red, but I have seen them in plaid as well. 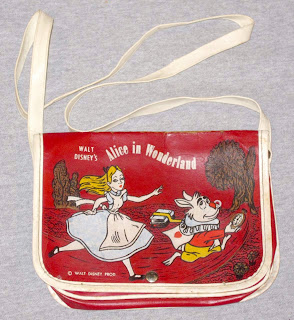 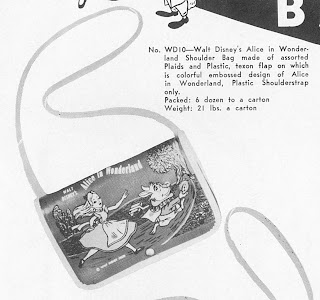 The material on this is pretty strange (called texon) which feels sort of like vinylized cardboard.  Whatever it is, it is stiff and brittle after 60 years.
Posted by Matt at 12:00 AM 0 comments

I was very excited when I found this, a retailer catalog for National Leather Manufacturing Co., Inc. of Brooklyn, NY, as it features several children's bags that I have long wondered about. The catalog lists a wide variety of leather bags and brief cases for business use, but has a large section devoted to Disney bags in the first six pages, along with some other character bags following (I especially like the Captain Video bag). 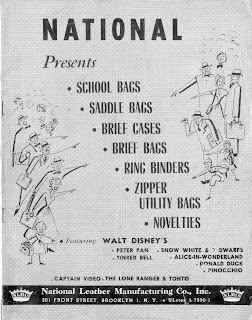 There is an emphasis on Peter Pan, as that was the new film they were promoting with this catalog (dated January 1953).  According to Tomart, they were a licensee starting in 1951, so it is likely that the Alice bags were available as part of Alice's release, although until a catalog is found from that period it is only speculation. 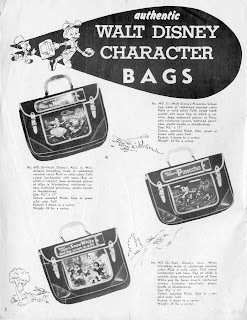 Of primary interest to me are, of course, the Alice bags, starting with WD30 pictured above, the Alice in Wonderland schoolbag.  Listed as coming in assorted colors and plaid twill, rubberized.  The art is so-so, and as you see, is the only art used on the entire line.. 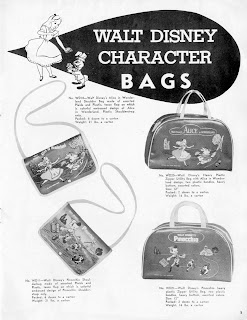 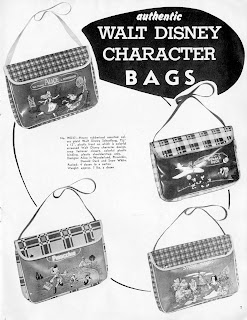 Finally WD37, the Alice in Wonderland schoolbag with shoulder strap rather than handles, and no pencil pocket. 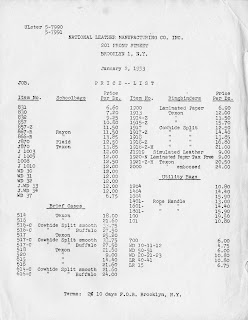 Prices listed here are per dozen, which boils down to wholesale pricing per bag as follows:

$1 in 1951 dollars is equal to about $9 in 2013 dollars, figure that retail markup is about 2x, yields retail pricing on these bags as follows:

I guess that looks about right.  Stay tuned for more on these National Leather bags.
Posted by Matt at 12:00 AM 0 comments

This is a new one for me, and the first item from Finland on the blog.  A magazine called Uutisaitta from Finland in 1951, featuring an insanely cool cover.  Uutisaitta loosely translates to 'news trove', so I guess this is all the news that's fit to print - in Finland. 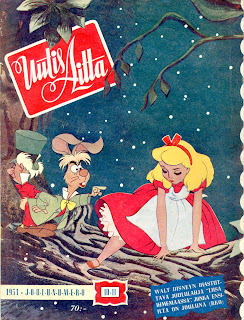 The cover on this is great, again with the weird red dress we've seen so many times in the past.  Did these people not actually watch the film? 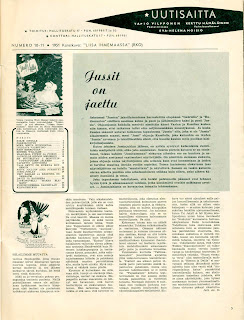 The contents don't really have more Alice, just a smaller reproduction of the cover on the title page.  Still, only one I've ever seen!
Posted by Matt at 12:00 AM 3 comments

Something Fun While I Regroup for New Posts

I was sent this link last week while on vacation, it is very fun.  New posts to resume shortly.
Posted by Matt at 11:17 AM 0 comments