Happy Thanksgiving to all my American readers out there. For those of you outside North America, this is the day we celebrate the joys of the large roasted fowl, as our friends Alice, the Mad Hatter, and the Caterpillar seem to be doing in this image. 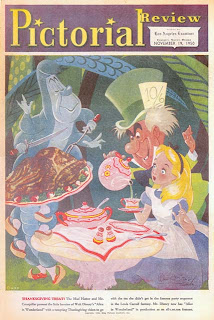 This is a newspaper supplement from November 19th, 1950, a full 8 months before Alice in Wonderland was released in theaters. This image is just wrong in so many ways it is hard to count. Either that is one big caterpillar, or one tiny turkey. And the turkey looks like something right out of Regrettable Food.

As was standard with the newspaper supplements, there is no story inside about Alice, just a pretty picture on the cover (well, sort of). But the idea was to get people excited about the upcoming feature. And how could you be anything but excited once you saw this large insect larva serving up turkey.

Me and My DVD Experience

First of all I want to say that the whole crew at EMC West are just fantastic! They were so nice to me and greatly relieved a lot of my fears and anxiety over being on camera. I highly recommend them to anyone who needs this kind of work. Plus donuts!

My experience was not exactly what I was expecting, but I think it turned out ok. I was way more nervous than I thought I'd be, as evidenced by needing re-application of makeup even before we started filming! I caught my self rambling on a couple of occasions; I'm sure I didn't catch myself on others. I'm quite sure that the EMC crew will make me look much more intelligent than I felt with a little judicious editing ;-)

All in all a great experience, one that I hope to repeat when/if there is an Alice Blu-Ray release (hint,hint). I'm sure I'll be much calmer having one under my belt already. Who knows, maybe there'll even be budget to come and visit the collection in situ, that would be ideal.

- Matt Crandall, Alice Authority (thanks Hans!)
Posted by Matt at 12:01 AM 0 comments

I'll be offline for a couple of days, taking a whirlwind trip to beautiful downtown Burbank. Yours truly is being interviewed for the new Alice in Wonderland DVD supplemental material. How cool is that? Everyone please send good thoughts that I don't make a complete ass of myself on camera.
Posted by Matt at 12:02 PM 6 comments 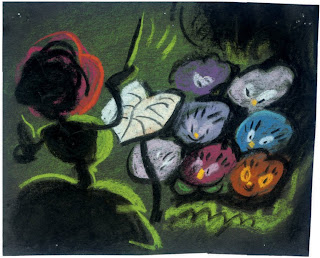 e some pretty spectacular items in an upcoming Christies's London auction, including 5 lots of Alice in Wonderland concept art (1,2,3,4,5), an original insert movie poster (link), and the original story outline of a lost Alice comedy (link). Save those pennies! And if anyone is looking for Christmas gift ideas for me, I'm particularly partial to lot 356.

Last, and certainly not least, is the Caterpillar. Finally! This is the only vintage caterpillar that I am aware of. What a rare figure indeed. I would argue that this is the rarest of all the Disney Hagen figures, rarer even than Samson. Over the years I've only seen 3 Caterpillars for sale, but I've seen 6-10 Samsons. 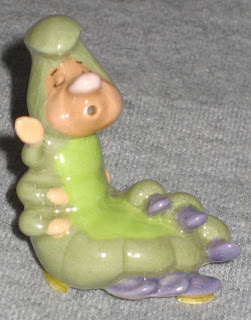 There has been a lot of speculation on how this guy was originally sold. If you look at the underside of him, you will see that he is curved in shape, as if he were meant sit on something rounded. The story I heard from a knowledgeable collector who interviewed the sculptor on the Disney line, was that he was originally intended to have a mushroom to sit on, but that it was deemed too expensive and the mushroom was dropped. Some will point to the photo in Tomart's as proof that he was indeed sold with the mushroom, but I have spoken with the owner of that particular figure and he has confirmed that he just put the caterpillar on a random mushroom figure because it looked good. We may never know.
Posted by Matt at 12:01 AM 3 comments

Third up is the March Hare. I just love the half cup of tea. Again, very fortunate to find him on the original card. And quite the bargain at 75¢ original price compared to his hatter companion. 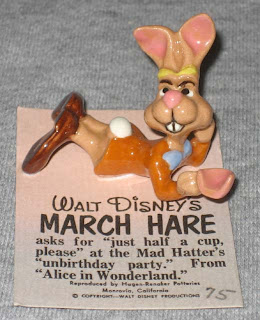 Second of the Hagen set is the Mad Hatter. What a fragile little guy, they must have designed him with replacement purchases in mind. Such tiny little feet, and long skinny arms holding a tea pot no less. 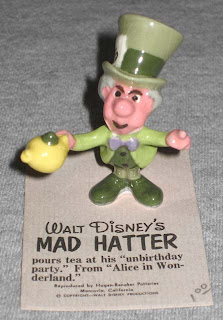 I was fortunate enough to find this guy on his original Disney card. Notice the ridiculous original price, souvenirs at Disneyland were outrageous! What I wouldn't give for that ol' time machine and a fist full of quarters.
Posted by Matt at 12:01 AM 0 comments

Most people are familiar with Hagen Renaker, even if they are not familiar with their Disney figures. They produced - and still do produce - a huge range of miniature animal figures. I remember seeing lots of these little animals on paper cards at my local Hallmark store when I was growing up.

Hagen Renaker held the license to produce Disney figurines for 7 years (1955-1961), and they were only available for purchase at Disneyland, at least initially. A set of four figures from Alice in Wonderland were added to the line in 1956. 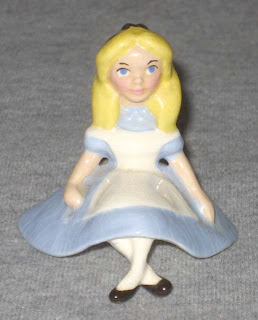 This Alice figure is different from most Hagen figures in that she never had a paper card. Rather, she was the very first Hagen figure to bear a named character label, the only one of the miniature line to have such a label, although several figures in the larger Designer's Workshop line had similar labels.

As time went on, the named label gave way to the generic WDP label found on lots of Hagens. 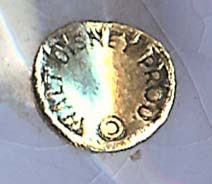 And I even have one that has a Disneyland Emporium Label on the underside. 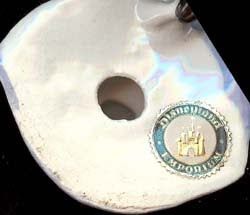 Alice is by far the most common of the Alice in Wonderland set, but she is very difficult to find with the named label still intact.
Posted by Matt at 12:01 AM 0 comments