Peter Puppet Playthings made a lot of Disney marionettes, but as far as I know, this was the only full-blown marionette theater set they made with a Disney theme. As with most licensees, they were hoping for a big payday with Alice, probably why they decided to go all out with the marionette theater. And they advertised heavily. This is a very cool full color ad from Playthings magazine advertising the set of three marionettes (Alice, Mad Hatter, March Hare). 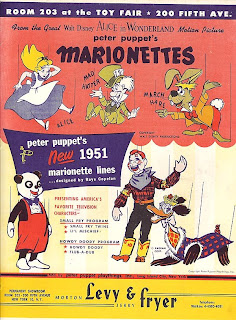 The marionettes themselves are pretty scary looking, and not that hard to find. They came in themed boxes with Alice art, and this brochure advertising the marionette stage.

According to the brochure, the full set consisted of stage, curtain, and two backdrops (actually a single double-sided backdrop). 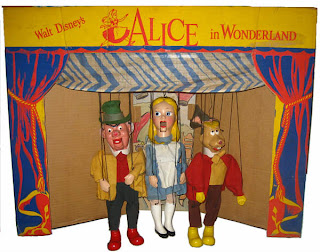 It is difficult to see the backdrop in this photo as my display space is a little cramped so only a fraction of it is visible behind the Alice marionette. It is a miracle that this theater survived at all, since it is really cheap cardboard with screen printed graphics. It probably survived only because whoever owned this stored it in its original box, which is in pretty bad shape. They did a decent job coloring the backdrops too.

The brochure goes on to say that there is a record with the movie theme included as well. And there is, the Golden Record. I guess Peter Puppet worked out some sort of deal with Simon and Schuster to distribute the record with the theater. 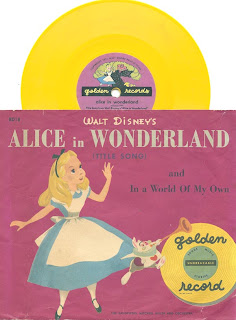 And you can't have a puppet show without tickets. Yes, these are Globe tickets.

Not listed but also included is a script for the show. 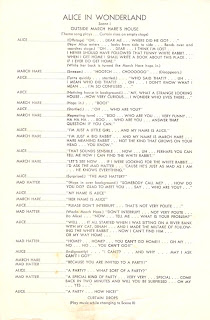 The two scenes in the script nicely match the two backdrops as well.

Believe it or not, there are actually two variations of the theater. Stay tuned for pictures of the other style...
Posted by Matt at 3:08 PM

Wow. There's even a script? That is pretty cool, actually. It's a very complete kit for putting on a show! (The tickets are a nice touch.)

Hey Matt, that's a sweet little set you got there. How fun! Yeah, they are a little scary, but find me a "marionette" that's not scary! Thanks for the super post!

Its Sept 4 2010 - Have you seen the current listing on Ebay for the Alice and I think the rabbit on ebay? I can't afford it but maybe you would like to look at it...the two marionettes are in a suitcase I think and need some repair. I have no relation to seller. My sister in law speaks about having an Alcie marionette a long time ago.
Just thought I'd tell you...

@Gail - thanks for the heads up, I'll check it out!

I know this is an old post, but I finally purchased one of these old Alice marionettes, and I found your blog very informative! My interest in marionettes resurfaced when I visited Tijuana, and they had a lot of puppets for sale, but they are now made out of plastic and look cheap--not as nice as the old vintage wood ones with plaster heads. This Alice puppet is adorable!