Alice in Wonderland has had a love affair with Christmas throughout the years.  Most fans know that Disney's first TV show was One Hour in Wonderland on Christmas Day in 1950, and the film (edited) was broadcast on the second episode of the Disneyland TV show in 1954.  But did you know it was on TV a second time on Christmas Day?  In 1959 on Walt Disney Presents (the next incarnation of the Disneyland TV show), Alice in Wonderland was again broadcast.  And for whatever reason, promotional adverts were created for stores that sold the various Alice records.  This is one such poster, about the size of a lobby card, advertising the show itself on Christmas, and the records for sale in the shop. 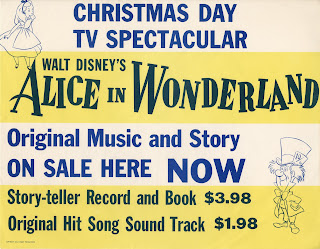 The first record advertised is the "Story-teller Record and Book" for $3.98.  That record is the first pressing of ST 3909 as told by Darlene of the Mouseketeers.  This first pressing is fairly scarce, being replaced by the much more common plaid-cover "Magic Mirror" record a few years later.  Collectors refer to this record as the "Enchanted Circle" cover. 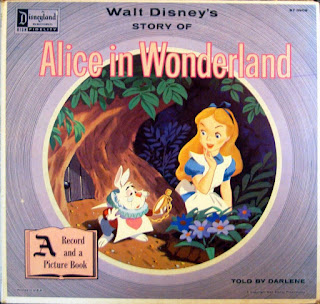 The second record advertised is the "Original Hit Song Sound Track" for $1.98.  That record is the first pressing of DQ 1208 which is identified by this red cover with a back cover featuring 9 color images of other DQ records.  Second pressings have 5 black and white images.  Later pressings of this title have a purple cover of Alice sitting with the Cheshire Cat.  The DQ 1208 record was the successor to the exceptionally rare WDL 4015. 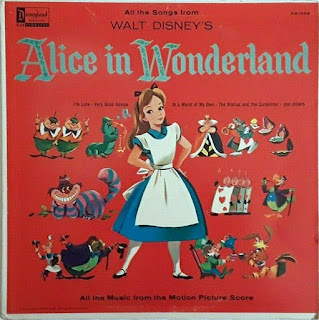 In today's dollars those records would be about $35 for the storyteller, and $17 for the soundtrack.
Posted by Matt at 12:58 PM