Well, I certainly let this series get away from me.  My own fault for trying to be tricky and match up the dates on the posts with the dates on the magazines.  I won't make that mistake again...well, maybe.

Anyway, we now return you to your MMW series already in progress.  Issue #600 features a cover of Donald and Goofy in the Foreign Legion, with a cool image of a mirage palace in the desert. 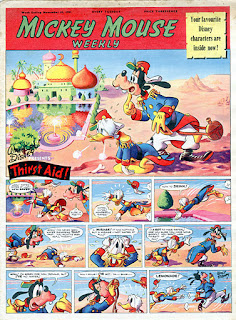 Chapter 17 of our adaptation features one last appearance of the caterpillar as a butterfly. 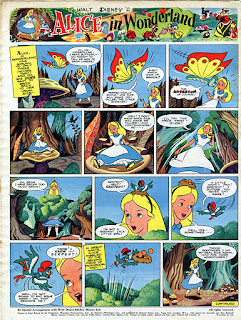 Alice grows and shrinks several times, and encounters the nesting bird and is promptly accused of being a serpent!
Posted by Matt at 12:01 AM