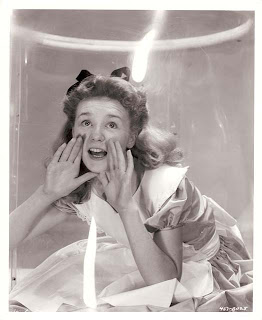 This first photo shows our heroine inside her glass bottle adrift on the sea of tears, calling for help.  The photo number gives us some clue as to the time the photo was taken, 451 equates to April of 1951.  That is very late in the game for reference photos, and judging by her costume and hair, it is likely that this particular photo was staged for publicity purposes. 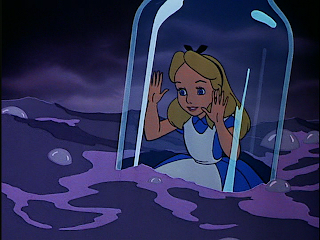 Later we'll see other photos of Kathy in the bottle, it must have been rather uncomfortable, and nauseating, to say the least!
Posted by Matt at 12:01 AM

Fantastic - thanks for posting both photos!

It's funny how things sometimes work in reverse where the actual animated drawing was probably a "reference photo" for the publicity still.

@Snow - yeah, it is pretty weird. The giveaway here is the dress, it is what I call her 'show' dress, very fancy, maybe satin, and the pinafore has lace trim. Most of the true reference photos the dress is very plain indeed, utilitarian, certainly no lace. Not to say there there weren't true reference photos for every scene, there were. But this is clearly (to me at least) publicity.

Matt, do you have any reference photos of Katherine *not* wearing the fancy costume? I agree that it looks awfully elaborate, but I am curious to see what she wore for the real thing.

@major - yup, in fact tomorrow's photo has her in what I call the 'work' dress