The studio created a brand new letterhead that featured art from whatever was the newest feature to be released, and all studio correspondence used this letterhead for (presumably) the period of time the film was in release, give or take a few months. I really don't know how long, but all the examples I have that were used in correspondence are dated in the summer of 1951, coincident with the release of the film. 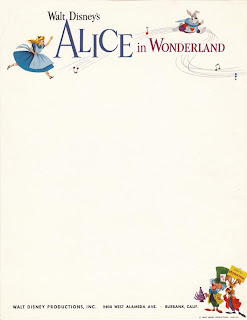 This example is quite nice as it is unused. I particularly like the font used in the original release, and I really wish the studio would stop using the horrible font they created for the 1974 release.
Posted by Matt at 5:40 PM