Disney Signs the Voice of Alice

I love this photo. Totally staged of course, but a great photo nonetheless. Caption is dated June 13, 1949 and shows an 11 year old Kathryn Beaumont signing the contract to be the voice of Alice with Walt Disney looking over her shoulder. The photo was taken in Walt's formal office, the office where these kinds of events took place rather than his 'working' office which is much more subdued (you can see both of these offices at Disneyland in the pre-show area of Great Moments with Mr. Lincoln). 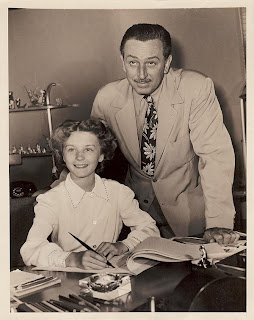 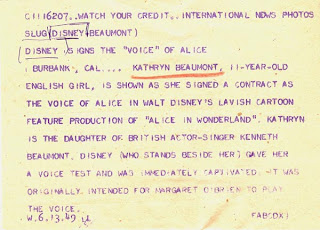 Kathy is so cute in this photo with her nose full of freckles. Entire text of the caption reads:

Disney Signs the "Voice" of Alice

Burbank, CAL....Kathryn Beaumont, 11-year-old English girl, is shown as she signed a contract as the voice of Alice in Walt Disney's lavish cartoon feature production of "Alice in Wonderland". Kathryn is the daughter of British actor-singer Kenneth Beaumont. Disney (who stands beside her) gave her a voice test and was immediately captivated. It was originally intended for Margaret O'Brien to play the voice.
W.6.13.49
FABCDX
Posted by Matt at 6:43 PM

That is a great find!

Thanks for sharing it with us!