Continuing with my Back-to-School theme (I only just realized tonight that I had a theme), Hassenfeld Brothers (later known by the contraction Hasbro) produced a number of items for the original release, most notably a series of playsets that were advertised in Playthings Magazine as well as the National Screen Service campaign book. These were the makeup kit, sewing kit and nurse kit (stay tuned for future posts on those items). But they also produced a pencil box that I have not as of yet found any advertising for. 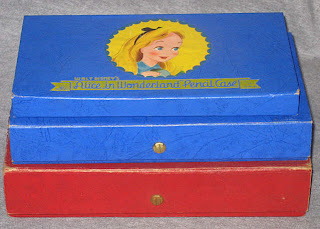 I have found this pencil box in three sizes to date (small, medium and large) and two colors (red and blue). The contents of the various boxes is similar and pretty standard school supply fare. The illustration on the cover is taken from the makeup kit, if you look closely you can see that Alice is holding a powder puff and wearing nail polish.

The small box has a ruler, some pencils (custom printed with Alice in Wonderland on them), a nib pen (minus nib), a protractor, crayons, and an eraser. 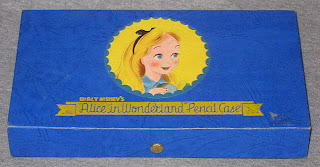 The medium pencil box has the same as above, but also has a strange little drawer for holding bits of paper I imagine. I have found them with a weird poster of university pennants, and maps. The medium size also appears to be the most common of the three sizes, and blue is far and away the most common color as I have only ever seen one in red. 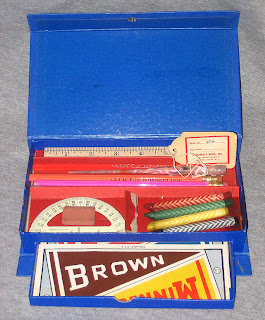 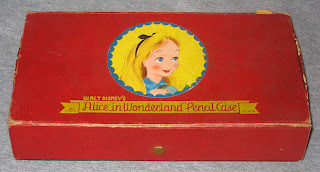 The upper tray has a different configuration than on the medium box, and does not have space for the protractor, so it probably didn't come with one. 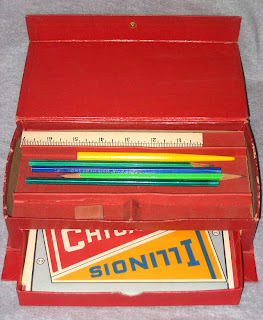 Oddly, it is not really functionally deeper as there is a cardboard filler in the drawer making it shallower. I have no idea why they would go to the trouble to make a bigger pencil box only to remove the extra space.
Posted by Matt at 11:29 PM

What a collection!! I give you a link to an auction catalogue where you can find Alice's storyboard drawings by Bill Peet and also an original cel: http://www.rossini.fr/flash/index.jsp?id=2063&idCp=62&lng=fr Email me if you want more info anim@rossini.fr Good collecting Regards