Perhaps the most elusive and sought after of all Disney ceramic figures are those produced by Zaccagnini of Italy. Not a lot is known about this company - at least in this country. I believe it was located in Florence, and produced figures after the war through the mid 1950s. They did LOTS of characters, and in some cases in multiple sizes! In the early days of Disneyana collecting, the name of the company was not even known, just that they came from Italy. At one time a few surfaced with paper labels that said Concessione Walt Disney, which led to the mistaken belief that Concessione was the name of the company. In reality concessione means 'copyright' or something similar. The actual makers mark is a stylized 'Z' on the bottom of the figures. 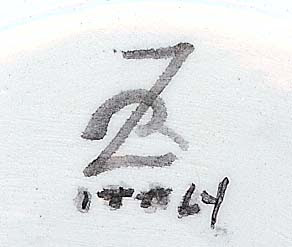 Here we see one of two known figures they did for Alice in Wonderland, the King of Hearts. 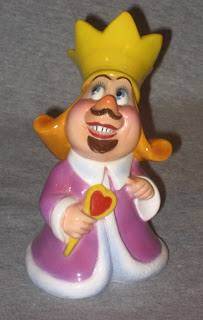 The king is about 6 inches tall, and is beautifully modeled and glazed, as are all the Zaccagnini figures. If anyone out there has pictures or examples of any of the other figures from the Alice set, I would be most interested in them!
Posted by Matt at 8:38 PM