Today's entry selected by my lovely wife Wendy. When Evan K. Shaw produced the figures for the Alice film they also did a set of four teapots, as pictured below in a catalog page from the year of the film's release. The figures themselves are pretty hard to find (with the exception of the Mad Hatter who seems most common of all), but the teapots seem to elude us entirely. But, I was fortunate enough to acquire two of the four from a former employee of the Metlox pottery some years back. 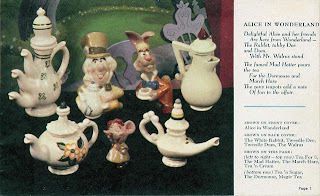 This first teapot is called Tea 'n Cream in the catalog. I love the angular handle, looks like it is arguing with the Mad Tea Party guests with arms akimbo. 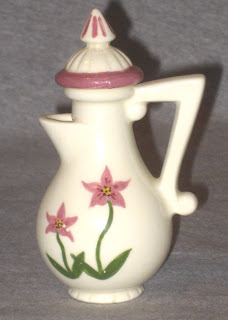 This second teapot is called Magic Tea and resembles Aladdin's magic lamp. Unfortunately at some point in its history it has lost the top finial of its lid, but still, I've not come across any other examples of any of these teapots since. 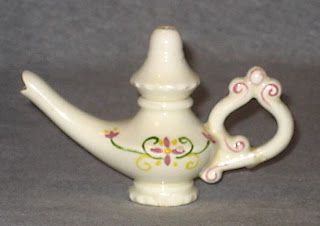 I would love to find the other two teapots, Tea 'n Sugar and Tea for Three, they must be out there somewhere.
Posted by Matt at 10:25 PM

Wow,those teapots are exactly the type you'd walk straight past at a flea market if you didn't know what they are!

Egad!! I had no idea these were ever made. My gosh, they are great.