Next up from Hasbro is the equally strange Alice in Wonderland Sewing Kit.  While it is conceivable that Alice would eventually learn the art of sewing - or at least some form of needlework - I doubt the good Rev. Dodgson ever imagined it being accomplished with a working miniature plastic sewing machine! 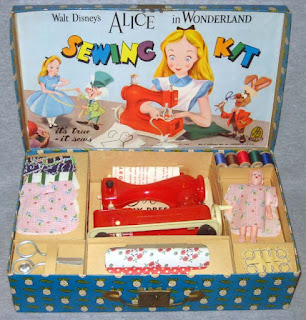 As with the make-up kit, this playset is chock full of OTS goodies for a young seamstress, including a doll for which the various clothes were designed!  As the box says, the little red sewing machine does actually sew, I just don't know how well.

The bad thing about this set is the design of the box.  There are no hinges on the lid, it relies on the paper of the lid to act as the hinge, which as you might guess is not that strong and is almost always found damaged if not completely separated from the rest of the box.  The closure is odd on this too, a strange little triple tab connection, although there is a variant of the box with a standard closure, the name of which I do not know, but basically is the old school closure for metal lunch boxes.
Posted by Matt at 12:01 AM

Very cool to have this so complete. Some little girl was not interested in learning to sew!

I'm so jealous you have these, I would give my right arm!