When I first encountered this, I was completely blown away.  Immediately following the feature film serialization in MMW, in the very next issue they followed it up with a entirely new Alice serialization, titled Walt Disney's Alice Through the Looking Glass. 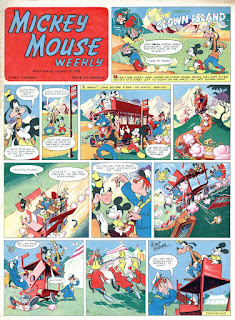 and we begin our new serial as the Carroll book begins, with Alice in her home playing with her kittens, and entering through the large mirror over the fireplace. 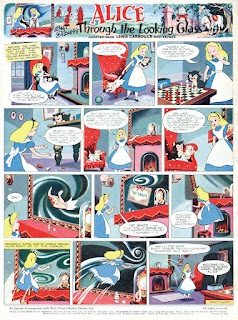 Let's see how well it tracks throughout the serialization.
Posted by Matt at 12:01 AM

This comic just points up how weird it is that Disney never cranked out an "Alice Through the Looking Glass" direct-to-DVD sequel back when they were making sequels to everything from Cinderella to Fox and the Hound to The Little Mermaid. I mean, they have an actual book sequel available to adapt!

Whoa, what the hell? Maybe this storyline was used in newspaper (Sunday) comics?