It is time for a new series, one that I hope you'll enjoy.  A series of over 100 stills of story art by David Hall that was used to create a story reel (Leica reel) for the 1939 attempt at Alice in Wonderland by the Walt Disney Studio.  As most of you know, this version was shelved, and David Hall left the studio shortly thereafter, but the art lives on.  Unfortunately I do not have the full set, but it should be fun anyway.

Today's stills feature the opening establishing shot of the English countryside, the first still is labeled '2'.  You can see David Hall's signature in the lower left corner. 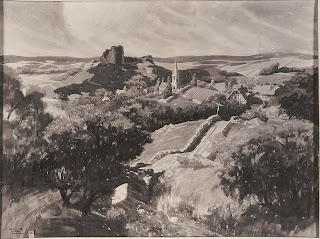 The second still is a close up of the central portion of the first image, presumably to draw your attention to the river bank.  It is labeled '2A'.  You can see two swans swimming in the river. 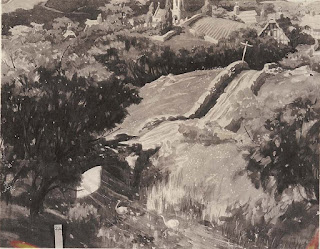 Wow, interesting! I love Mary Blair's styling on "Alice" (in fact it is one of my favorite things about the movie), but David Hall's artwork was beautiful. It's almost a throwback to the pre-WWII features.

@Major - that would follow. All of David Hall's work on Alice was completed in the last half of 1939, right in the heart of the golden age features (Snow White, Pinocchio, Fantasia, Dumbo, Bambi).