DIS 84 is Dinah. I hear you saying “hey Matt, Dinah is not a black cat, she's an orange cat, and what’s that thing on her head?” I’m glad you asked. 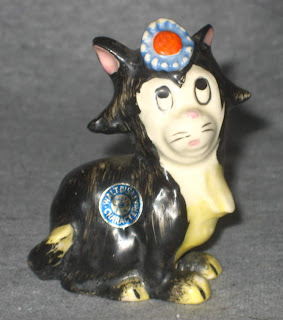 Years ago when I first studied the TOMART books ('cause that's just how much of a geek I am), I couldn’t figure out which characters DIS 84 and 85 were, since at that time no one had pictures of most of the figures nor the catalog pages (at least not in the US). Most of the figures listed had a best guess as to the character represented, but not those two figures. Based on the description “sitting cat with flower on head”, I made a guess that DIS 84 was Dinah. As you may recall, in the film Alice places a daisy chain on Dinah’s head, so it seemed a reasonable guess.

Fast forward 13 years, and the German Goebel book was released, with pictures of 84 (and 85). Still, no convincing evidence as to which Disney cat this was supposed to be, although both are pictured on the Alice in Wonderland page (but then again, so is a Donald ashtray). 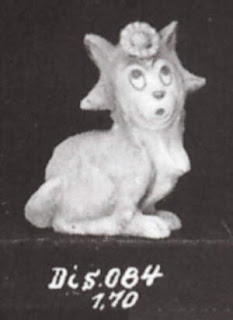 As I’ve said in previous posts, the studio released stills of character designs to licensees prior to the release of the film. Sometimes the pre-production art does not match the final design. This is one such case. This is a licensee still of a test cel setup of Alice, Dinah, and the Sister from the final scene of the film. You’ll notice that Dinah is black, not orange. 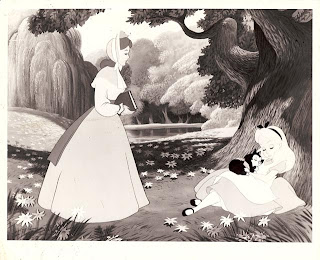 This is a detail of Alice and Dinah from the Big Golden Book by Al Dempster. Again, Dinah is black, AND Alice is holding a daisy over Dinah’s head. 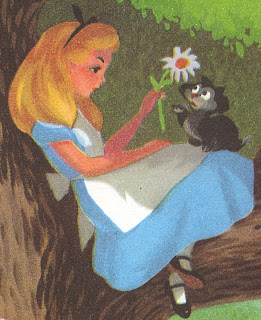 But the best and most compelling evidence is to be taken from the Dell Four Color comic book adaptation (FC 331). On the first page of the story there is this panel which is pretty much the exact representation of Dinah as modeled in the figure, right down to the color of the flower. 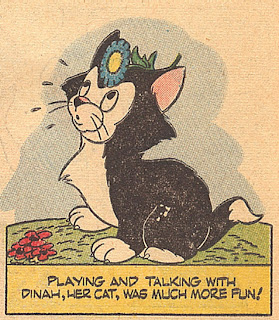 I don't know if there was additional licensee art available that has this image, but it seems an unlikely coincidence that this image and the figure resemble each other so much. And as you'll see in the next post, the "coincidence" extends even further.

UPDATE: The plot thickens. A kind reader forwarded this image of a Figaro model sheet from 1939 for Pinocchio. 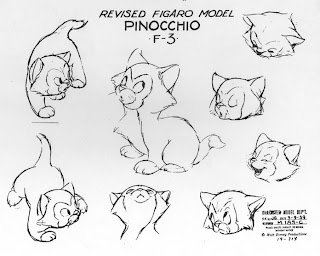 Looks like the early designs for Dinah were lifted directly from this Figaro model sheet. Take a look at this side by side comparison and tell me we don't have conclusive evidence now.

UPDATE #2: I recently discovered that in an Italian book (see this post) there is another rendering of Dinah that looks just like the above. Wonder how many more will be uncovered...
Posted by Matt at 12:35 AM

See, this is what is so cool about your collecting. You find an oddity, but you don't just say, "Oh, yeah, it's just weird." You do research! You find evidence. You really KNOW the stuff and can formulate intelligent theories. And I just love that so much about you. Thanks for blogging, mattman.