Walt's Office
A very kind reader sent in the photo below. It is Walt Disney's working office as taken at the studio in 1968. For those of you who visited Disneyland a lot (like me), this office resided in the pre-show area of Mr. Lincoln for years. I believe it is now located in Walt Disney World. 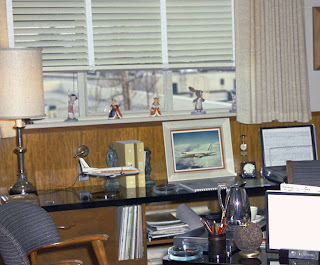 If you look closely at the window sill, you will notice the Queen and King nodders! For years I would stare at them in Mr. Lincoln (but for some reason never took a photo of them) wondering if I would ever see them in person. Well, I'm half way there! Thanks again kind reader for sharing this photo with me.

Labels
As mentioned in several posts I have not seen any named character labels on the Alice figures. But I have seen variations on the generic Walt Disney Character labels. The most frequently encountered is the round label. 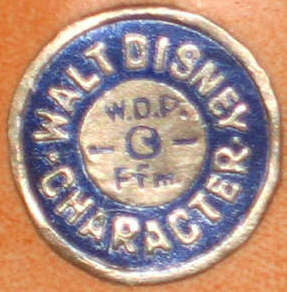 There is also a scalloped edged label that I've seen on some of the nodders, and as hang tags 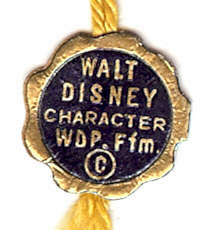 And on one occassion I've seen a rectangular label (on a Carpenter figure DIS 64 that I was unsuccessful in acquiring). 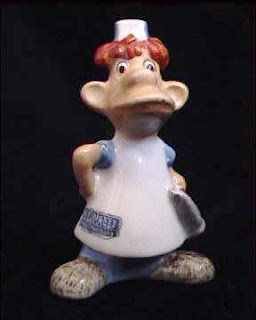 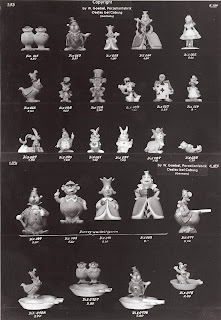 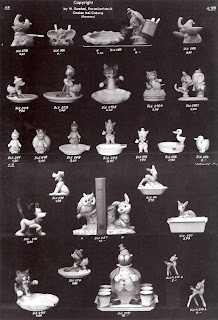 I spent many happy visits to Disneyland flattening my nose against the glass peering into Walt's relocated offices, or at least getting as close to doing so as the Cast Members -- and the ropes --would allow! There were so many intriguing items to be squinted at: the King and Queen nodders, certainly, in the working office, the sheet music and book titles in the formal office, and all of the sleek but comfy Kem Weber-designed custom furniture (Drexel Heritage has recently re-created some of these pieces for the home--they're pretty wonderful).

On the Goebel stickers/hang tags, what do the letters "Ffn" after WDP (obviously Walt Disney Productions) mean? Is that a German equivilent of TM or ©?

Again, many thanks for all of your detailed (and entertaining!) postings!

I think (but am not certain) that it stands for Frankfurt am Main, which is apparently a standard "Place of Publication" abbreviation in German.

The maquette of Pinocchio on the left side of the window ledge, was the first three-dimensional statuette created in the Model Department. This maquette was sculpted by artist Charles Cristadoro.

Visit my blog vintagedisneymemorabilia.blogspot.com and do a search for "Pinocchio's Christmas Party" to read more about this statuette.